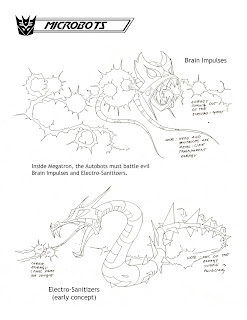 As promised, part two of my models for Microbots.  This is one of the rare S2 episodes that I have character models for, as opposed to just backgrounds.  And what nifty models they are!  We get to see some of Megatron's internal critters, including his evil Brain Impulses, and an early version of the Electro-Sanitizers. The Impulses are pretty much what showed up in the episode, but the Electro-Sanitizers are completely different.  Maybe the producers decided that they didn't want two snake-like monsters, and so went with the more abstract threat that we saw in the episode.  Regardless, two nifty little kinds of monsters that live within Megatron.
Posted by Jimtron at 8:14 AM

One of my favorite episodes. Allot of very interesting things were shown, some of which were never fully explained. A good example for instance was why an archeologist would have blue hair?

I think I prefer the concept that made it in, though a laser tongued serpent with a twirling bladed tail slithering around Megatron's insides could have been just as interesting.

“Evil brain impulses” being a literal thing is always funny :-)