The Ark Addendum - Ravage's Transform and The AllSpark Almanac Addendum! 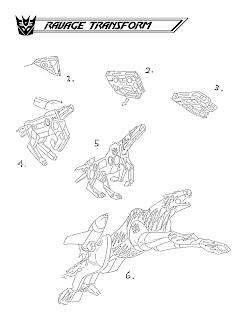 I thought I'd kick this week off extra early, because it's a big week for me and I'm feeling Transformersy.  And when that happens, I go trawling through my collection looking for especially nice material to share with you, my loyal readers.  People like cassettes, so I thought I'd start the week off with Ravage's transformation.

This comes from straight out of More than Meets the Eye.  I like that he winds up in the classic Ravage leap, also seen in his character model and box art and numerous comic book panels.  And who can blame the artists for reusing it, it looks fantastic!

But why am I feeling so excited this week?  Savvy readers can probably guess.  Yup, this Wednesday, Timelines #6 hits fine comic book stores everywhere.  It contains the rather excellent Isenberg / Matere collaboration that was Transformers Animated: The Stunti-Con Job.

Why this is relevant to me is that it ALSO contains a 16 page AllSpark Almanac Addendum, covering the BotCon characters and events.  The Transformers Collectors' Club was kind enough to post a preview of it, which I'll share here.  In-universe, we cover 6 Autobots, 6 Decepticons, Trypticon Prison, the events of The Stunti-Con Job itself.  Out of universe, we look at this year's BotCon, both the events and the toys.  There's also a special teaser for... well, let's just wait and see.

Oh, and if you're in the SoCal region, we're doing a special signing at Emerald Knights in Burbank.  On Saturday, December 10th, at 1:00 PM, Bill Forster, Marty Isenberg, and I are doing a signing for the book.  We'll be alongside some of the talented folks behind Transformers Prime as well as IDW's Mike Costa and Livio Ramondelli.  It's shaping up to be quite an event, so I hope to see you there.  (There being 4116 W. Burbank Blvd, Burbank, CA 91505.)
Posted by Jimtron at 11:25 PM

Another great character sheet post Jim and teasing us with the Allspark Almanac stuff, I think the Stunticon job is going to be a story I have the most copies off soon lol

You definitely know how to get our attention, hope the event goes well.

Oh that almanac page is so teasing! Still going to buy the comic book when I have the chance to go downtown on a blue moon. Amazing story,art and gives a nice conclusion(?) to TFA for the moment.