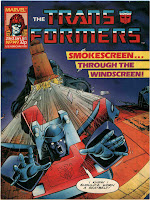 Unicron! Part 4 was written by Simon Furman, drawn by Dan Reed, coloured by Steve White and lettered by Annie Halfacree.

The cover is by Jeff Anderson and I feel kind of bad for constantly trashing the covers from this period but it's another bad one. The perspective gives the sense that something exciting is happening but it's actually pretty hard to see what it is that Smokescreen is flying out of. As well as this, given how dramatic the moment that this cover depicts is in the proper issue, Smokescreen's speech balloon becomes doubly unfunny.

"SHAKK!" the Autobot shuttle that escaped Junk last issue is struck by multiple shots and starts a flaming descent. Smokescreen is at the helm, his panicked thoughts providing a good recap of the previous few issues and the events in between. He has been able to pilot the shuttle back to Cybertron with the badly injured Inferno in the medical bay but Scourge and Cyclonus, still under Unicron's mental control, have tracked him and critically damaged the ship.

The two Decepticons unleash a formidable barrage of missiles that Smokescreen only just manages to avoid at the last minute when he realises the engines have regained some power. It turns out that Inferno, while still in a very bad way, has managed to repair the engines and now takes up his position at the weapon controls, blasting at the Decepticons and forcing them to peel off.

ells him that one of them has to survive to inform Rodimus Prime of the threat posed by Unicron. Unfortunately it turns out that the last hit from the Decepticons took out the landing gear and now the only possible landing is a crash. Smokescreen says he will try to control it as much as possible but the chances of survival are minimal. Inferno, realising the desperation of the situation, gets the drop on Smokescreen and hurls him from the shuttle as it hurtles past a tall building. Smokescreen bounces, dazed, but alive. Inferno manages to hold the shuttle steady for long enough to avoid the main Autobot army and angle it straight towards the Decepticons.

Smokescreen looks on pleadingly as the shuttle finally pitches towards the ground and detonates in a titanic fireball. Scourge and Cyclonus make the classic comic book mistake and decide "Nothing could have survived that." not noticing that Smokescreen was thrown clear before the explosion.

Back on Junk, Unicron is pleased at the outcome. He does really think that anyone can stop him at this point, b 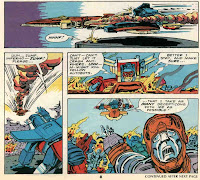 ut is glad that Rodimus does not yet know of his return. Death's Head, momentarily free of control or punishment, takes the opportunity to taunt the chaos bringer, knowing that it will incite a rant about Unicron's ultimate power. This turns out to be by way of an experiment for the bounty hunter who has noticed that when Unicron speaks out like this his mental control is at its weakest.

Death's Head keeps Unicron talking by asking him the purpose behind a time portal that has been erected nearby. Unicron explains that his errant minion, Galvatron, is still at large in Earth's past and when Unicron is completely rebuilt he will use the portal to pluck Galvatron from wherever he is and teach him that he cannot escape his master.


Back on Cybertron, Smokescreen's arrival has engendered a council of war. Rodimus is reluctant to leave Cybertron while the battle still rages but the others manage to persuade him that the matrix of leadership might be the only way to stop Unicron. Rodimus orders a shuttle prepared, he, Smokescreen, the Dinobots and Scattershot are heading for Junk!

On Junk, Death's Head grabs a gun and blazes away at nearby Junkions. Unicron immediately notices and starts his psychic punishment. This turns out to be all part of Death's Head's desperate plan. By concentrating very hard he is able to ride Unicron's psychic attack onto the astral plane where he hopes to be able to battle the dark l 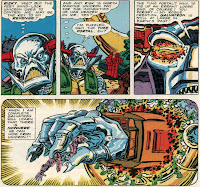 Furman quite rightly keeps the action at a suitably blockbuster level for this issue. The extended sequence with the crashing shuttle is very effective because while it's a well-worn genre idea, it hasn't been overused in Transformers and makes a bit of a change from the straight-forward battle-action. Even in the few panels we see them together, we get a great sense of Inferno and Smokescreen as characters and Inferno's sacrifice is ultimately quite moving.

The emotional weight of Inferno's death aside, the biggest turning point of the story is Death's Head's invasion of Unicron's mind. It's as yet unknown as to how this will play out but it's a genuine twist in the tale. It has not exactly been telegraphed that this is something Death's Head might be able to do but it certainly doesn't seem implausible either. After all, the bounty hunter is extremely strong-willed and it makes sense that for Unicron to forcefully share his thoughts with others he must open his mind in some way.

In these eleven page issues Furman frequently demonstrates the skill to paint emotional and dramatic beats with only the bare minimum of exposition. This is something that appears to be missing somewhat from modern comicbook writing, and I'm not really just talking about Transformers. I'm not about to embark upon a rant about "writing for the trade" because a) it's been done

a million times before and b) writing with a collection in mind is by no means always a bad thing. That said, I can't help but view an issue like this, where so many things happen and plots twist, in only eleven pages, as well as including an exciting, but not particularly plot-necessary crash sequence as something of a masterclass in how to write episodic fiction.

That is not to say that I think this is Furman's best Transformers work, although The Legacy Of Unicron! as a whole is up there, but it just strikes me as a good example of an issue where a lot changes in a few pages and the characters aren't let down by the speed of the plot moving around them. That is something to be noted and celebrated.

ere are fewer panels uniquely suited to his talents. One of his biggest problems is that he seems to really struggle with Death's Head's face and the bounty hunter seems comically malformed in one or two panels. One thing is clear - Dan Reed saw Predator the previous summer and it gave him some pretty clear ideas about what an alien bounty hunter should look like despite the original design for Death's Head predating that film (oh hey, look, an accidental pun!).

A great continuation, slightly marred but certainly not undone by lacklustre artwork, Jeff Anderson takes over next week. Lets see how he does.
Posted by Bishbot at 10:40 AM

Smokescreen's seatbelt speech balloon reminds me of the PSA blurb at the end of US#33, the halfway point in Man of Iron, about not accepting rides from strangers. That reprint would have come out in the States shortly before this issue's release in the UK, so could that have inspired whoever decided to slap that joke on the cover?

The face of Reed's Death's Head is so scrunched up, I'd also venture a guess that it's what the German artist for those Condor Verlag covers was drawing from when he made DH look like those toads from Bucky O' Hare.

But those were indeed the only minor complaints one could level. The scale problems inherent in Unicron's plans for the time portal...have never exactly been handled better elsewhere. Great review.

The UK stuff has to be a giant portion of what's been released of Marvels Transformers (and of Furman's resume) so I still have to get around to reading these, time and money permitting. Man of Iron was a great enough story to pique my interest.