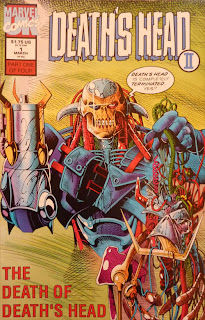 The year is 1992 and, several years after his last appearance, a new Death’s Head series is being put together by Simon Furman and Geoff Senior. Unfortunately, the new editor-in-chief of Marvel UK cancels those plans and opts for a complete reinvention of the character. Death’s Head II became quite a stalwart of the US-style titles, but I’ll just be looking at the introductory limited series that saw the end of the original mechanoid.

The story was by Dan Abnett, pencils by Liam Sharp, inks by Andy Lanning and Bambos Georgiou, colours by Helen Stone, letters by Peri Godbold and the editor was Steve White. And the editor-in-chief who, according to Furman's notes, did away with Death’s Head, was Paul Neary.

The cover makes no bones about what’s about to happen: Minion, a formidable cyborg with horns, a skull-mask and a multi-purpose right arm is holding what remains of Death’s Head’s noggin. The speech bubble “Death’s Head is completely terminated, yes?” competes with the caption,” The Death of Death’s Head” for stating the obvious, but the speech does hint at some kind of rebirth. It’s a straightforward, bold and gory (from a robotic sense), with some good detailing – although the artist appears to have lost interest in finishing Minion’s lower torso, and settled for some criss-crossed lines.

There is also an alternate version on the back cover: a full portrait of Minion battling Death’s Head while a woman with a green unitard, eyepiece and flaming pink hair watches from the background. I think they made the right choice for the front cover. Minion is well-rendered and dominant (although his feet disappear into nothingness), but even with Death’s Head stooping awkwardly, Minion is proportionally too big. Both look as if they are posing, rather than actually fighting. The woman – who we learn is Dr Necker – appears too small and uninvolved in the scene. Finally Minion’s speech bubble, “When I absorb your consciousness, Death’s Head … I shall be all you were, and more!” is a tad melodramatic, although it is at least different from the caption: “Meet the new Death’s Head cyborg”

We begin in an alien landscape: ‘Tyler’s World’. Death’s Head has infiltrated the futuristic fortress of Wilson Tyler, an old acquaintance and his current target. His inner monologue is narrated in the captions as he abandons all subtlety and dives into combat with Tyler’s guards.

After a bloody brawl (during which he manages to lose most of his armour and appears curiously bare), Death’s Head moves for his quarry, silently gloating over the three million bounty:“Think I’ll show Tyler the check before I retire him. That way, even if he gets to heaven, he’ll be jealous and won’t enjoy it.” 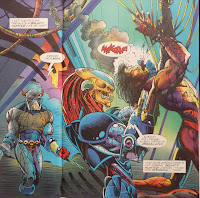 Instead he finds another mound of dead bodyguards and Tyler strung up and pleading for his life. The perpetrator is Minion, and he completes the execution by ramming his arm-device into Tyler’s head: “Subject 103 – Tyler, Wilson. Instincts assimilated.”

Death’s Head confronts Minion, who brushes him aside, claiming to have another appointment – “but after him – you’re next!” He teleports away, although Death’s Head has placed a tracking beacon on him.

Minion reappears in a laboratory of Advanced Idea Mechanics, 2020AD. He is a project being developed by Dr Necker, who notes disapprovingly that he is displaying signs of humour and flippancy. Minion quickly teleports off after his next target as Necker reports to the A.I.M board.

We learn that the Minion project – to create a super-warrior with access to over a hundred assimilated personalities – was conceived after A.I.M. had a precognitive warning that some nonspecific threat would destroy the company in the near future. Necker is confident that Minion will be formidable enough to deal with any threat.

Which segues to Minion’s next target: a four-armed brutish alien named Lehdrox. The barbarian is torturing Phaedra, an oracular alien, for information. Minion leaps in and, after some heavy brawling, kills his opponent. “Subject 104 Lehdrox, K’Vant. Instincts assimilated.” As she vanishes, Phaedra thanks her saviour, calling him ‘Death’s Head’. Minion is surprised, but also teleports away. Moments later the actual Death’s Head teleports in, tracking Minion. He has exchanged his usual armour for a trenchcoat and locks onto his quarry’s location.

Back at A.I.M. headquarters, Minion is readying himself for the next jump. Death’s Head bursts through the ceiling and shoots Minion, claiming to want revenge for being cheated of the bounty on Tyler.

Minion reveals that Death’s Head is his next target and charges. He proceeds to tear the mechanoid apart in the space of a page. On his knees and helpless, Death’s Head can only plead “No!” as Minion decapitates him with a “Yes!” 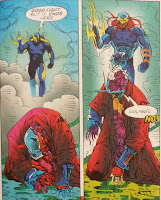 He plunges his blade through the robotic head. “Subject 105 Death’s Head … Instincts assimilated.” Minion suddenly staggers under the force of a systems overload, as the technicians report that something has gone wrong with the implant. Minion recovers and teleports after his next and final target, now with an added inflection to his speech: “I’ll be back, yes?”

Dr Necker panics at this turn of events and resolves to chase after Minion. She takes off most of her clothes (for no obvious reason) and asks the technician to identify the last target. “A human named … Reed Richards.”

Full disclosure: the first time around, I didn’t take much to Death’s Head II, only buying the limited series and a few initial issues of the run. But I haven’t read them since then, so I’m approaching this limited series with fresh eyes.

This is a curious issue, part-introduction and part-handover. The opening is a nice parallel with the original Death’s Head series: the mechanoid stalking through the rafters of a fortress, the captions revealing his dry humour.

Abnett does a very good job of capturing Death’s Head’s character and I enjoyed the deadpan humour of the narration. He uses exclamation marks sparsely – and in comics, where everything seems to get over-punctuated, that helps to set the tone.

Having done so well with the character, it’s a real shame that it’s thrown away by Death’s Head's motives for hunting Minion. One of the cornerstones of his character (from High Noon Tex onwards) was that he never saw any profit in revenge. And yet Abnett has him do exactly that: tracking Minion to avenge the loss of his bounty, charging forward in what proves to be a fatal miscalculation.

What makes this so sloppy is that the motive is unnecessary. There are two other solid reasons why the protagonists must fight: 1) Death’s Head is on Minion’s hit list 2) Minion has threatened him, making a pre-emptive strike perfectly plausible.

It’s difficult to judge Minion’s character at this stage. Beyond a swaggering tough-guy persona, he doesn’t display much of a personality (which, given he has access to 103 of them, is surprising). But the assimilation of Death’s Head is inevitably going to be a significant factor in his development, so I’ll wait and see what comes.

The only other character – Dr Necker – is the one I found the most interesting. Aside from Death’s Head’s abortive revenge trip, she is the only one pursuing a strong motive: to complete the Minion project and prevent a future threat. Even when Minion malfunctions and vanishes, the impetus for the next issue seems to be her chasing after him.

As for the general plotline, it’s basically a series of Minion’s assimilations. Having Death’s Head discover Minion across a heap of newly-slain is a nice way to show his potential danger, yet keep an air of mystery about him (it would have worked better if Death’s Head himself had not just killed a whole bunch of the same bodyguards). The Lehdrox assimilation is an enjoyable enough brawl, although nether combatant had much personality.

During his fight with Death’s Head, Minion revealed that the mechanoid was his next target, as if this was supposed to be a surprise. Of course, everything from the series title, to the hype, to the front cover tells us that one is going to kill the other – not to mention Minion himself pointing this out 10 pages earlier. However, the repetition of “Instincts assimilated.” makes for a nice build-up.

Sharp’s artwork is strong, and owes a lot to the Rob Liefeld-style that emphasises guns, muscles and lots of them (it’s even Liefeld-esque in the avoidance of drawing feet). The detailing is good, and there’s some decent imagination in the alien scenes and characters. The robotic innards are particularly gory, although the colouring doesn’t do much to bring this out. The panels can look very crowded, however, and a lot of the movement postures seem awkward.

In terms of the characters, Death’s Head is rendered well, although his eyes are narrowed and hooded, rather than the traditional round optics and oblong eyebrows. Shedding his traditional cape, back-shield and body armour does make him look much diminished – although perhaps that was the intention. From one page to another, I found the rendering of Necker to be pretty inconsistent (possibly as a consequence of two different inkers).

As for the title character, Minion’s design seems to be a hybrid of Predator and The Alien, with the Terminator-1000’s liquid metal arm and elements of the original Death’s Head thrown in. This certainly conveys a sense of invincible menace, although seems too extra-terrestrial for A.I.M. Also, this invincible cyborg seems extremely advanced technology for just 2020AD. Since time-travel is a given here, maybe the project should have been shunted a few centuries into the future.

The biggest problem I find is that, as Minion’s face is something of a hockey-mask, it’s difficult to express any emotion or reaction through it. Still, if Death’s Head managed with a couple of eyebrows, there’s always hope…

Next week: Round 3 with the Fantastic Four in “Reed Richards Dies Tonight!”

I'm stil not sure why the heck Abnett throught it was a good idea to kill of the original Death's Head.

It would have been better, imo, if the two DH's had existed side by side. DH II was obvioulsy supposed to be a bad-ass without much humour, while I always considered the original DH comic to be very humouristic and have plenty of action at the same time.

In any case, a few years later Marvel released "The Incomplete DH", a reprinting of his earlier tales but with a new story bookending it. And that new story seemed to imply (if I recall correctly) that the old DH was still around as well, as his personality was also copied into another computer system or something.

And then there's Simon Furman's and Geoff Senior's "what if..." story, which was even better :)

Its almost as if Abnett set up to destroy all Furman had built. I refuse to consider that hideous abomination Death's Head.

It would have been a much better ending for DH to kill this unispired, generic bounty hunter,not for Abnett to show what a Mary Sue this new character was.

I agree, it seems a strange decision to kill off the original DH. I'm of the opinion that the original had more personality and character, while the Death’s Head II character always seemed more 'to the X-treme' trendy to me. Nice cover.

I quite liked both, but prefer the original.

Eugene, I don't think Abnett made the decision to kill the original. I'm fairly certain that the group editor at the time dictated the original should be axed. This is evidenced by his outright refusal to proceed with the proposed series pitched by Senior/Furman. I personally believe there was room for both to coexist too, and since Death's Head I was a time traveller, there still is, but clearly editors are stupid sometimes... Just kidding.