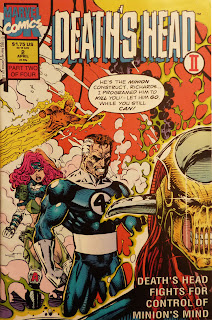 The front cover is a close-up of Minion, seemingly frozen as green energy crackles off him. Behind him stands a grimacing Reed Richards, and behind him stands Dr Necker, warning that “He’s the Minion construct, Richards … I programmed him to kill you! Let him go, while you still can!”. It’s not much of a cover – everyone looks very static, as if they’re in a queue, and the addition of the Human Torch flying in the background looks like an afterthought. There also is the caption “Death’s Head fights for control of Minion’s mind”, which makes the cover busier than an average panel.

The alternate cover on the back is a better idea: Minion stands over Richards and bats away The Thing as he intones, “Subject 106 Reed Richards … prepare for assimilation!”. For readers familiar with the language of the first issue, it’s a powerful threat and even the obligatory caption – “Minion vs The Fantastic Four” – is more direct. However, it’s not as well-rendered as the front. Minion isn’t large or central enough, his multi-function arm looks a bit stubby, and Thing appears to be performing a jumping jack, rather than getting thumped. So a split decision for which is the best cover.

Inside, we begin with an atmospheric bit of narration: “New York 1992. Thousands of lost souls come to the city every day, driven by their own needs and desires.” An electrical bolt hits the street with a ‘Kzzzaak!’ and from the smoke appears “Minion. Four hundred pounds of laser-machines cybernetics. Three centimeters of aligmented molybdenum armor. Two megawatt high-yield plasma fusion weapon. One consuming obsession … Reed Richards dies tonight!” It’s a good opening and, intentionally or not, reminds me of Death’s Head’s arrival in 8162.

Moving to an upscale restaurant, Reed Richards is waiting for Sue to arrive as he is being attended by a classic French waiter (who looks similar to John Cleese playing a classic French waiter). He is joined by Dr Necker, carrying a large gun and wearing what appears to be a combat bikini and WWI gas mask. She introduces herself as Evelyn Necker, prompting an odd exchange whereby Reed mentions Evelyn was his mother’s name and Necker affirms that she is not his mother.

They are interrupted by arrival of Minion and Reed wonders if this robot is connected to Doom (prompting a ridiculously unnecessary footnote, explaining who Dr Doom is). Without hesitation, Necker opens fire until her gun is confiscated by Richards. He censures her for endangering innocents with a firefight and they both retreat from Minion’s attack (in a nice detail in the corner panel, a patron of the restaurant is wounded – justifying Reed’s stance and it’s not something that gets shown often in comic brawls).

Richards and Necker commandeer a taxi and flee. Minion charges after them, although the pavement slabs break under his acceleration and throw off his aim. In the cab, Necker explains that Minion is programmed to kill Richard and steal his intellect – and won’t stop until it does. She also reveals that Minion has been disobedient ever since he assimilated Death’s Head. 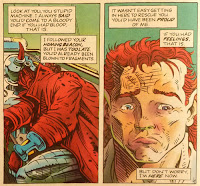 Interlude to the battle-damaged ruins of AIM headquarters, 2020. Posing as clean-up crew, Spratt is rescuing the ruins of the original Death’s Head. He conducts a silent (and quite moving) conversation with his deceased partner in the captions, then reveals he has a plan to resurrect him.

Back in New York 1992, the other members of the Fantastic Four have noticed the disturbance at the restaurant. The pursuit still ongoing, Necker lobs a grenade that knocks Minion off a bridge, but also shreds the taxi’s tyres, causing them to bail out of the resulting explosion.

Having arrived safely at the Four Freedoms Plaza, Reed deduces that Minion’s malfunctions are due to Death’s Head being a mechanoid. Instead of just downloading his instincts, as with his organic targets, Death’s Head downloaded himself entirely, and now his consciousness is battling Minion’s internal systems for control of the body. Believing that the Death’s Head of his acquaintance will be more amenable to reason, Reed’s solution is to help Death’s Head win that battle.The Thing shows up in the Fantasticar, then faces off with Minion to allow Reed and Necker to escape. The two trade a couple of punches, but Minion quickly proves superior and throws Ben off the bridge and onto a passing boat. 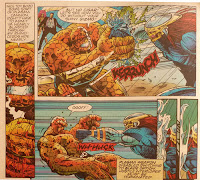 Outside the building, Minion appears behind Human Torch,unceremoniously punches him out, and gains entrance. He charges at Reed, who shoots him with a burst of tachyons. Minion topples, his neurons scrambled, and all his personalities begin to regroup.

As predicted, Death’s Head gets his act together first and causally states, “No-one needs to die, yes?” He wanders over to a computer and downloads the mainframe, effectively getting all of Reed Richards’ knowledge without killing him. “Fair exchange, yes? You save my consciousness, I save yours.” and with that, he time-jumps away.

Still trying to gain control over her project, Necker also time-jumps. The rest of the Fantastic Four arrive in time for a fairly unoriginal gag where Sue notices the lipstick from Necker’s good-luck kiss on Reed’s cheek.

Ending with ‘interlude two’ (more of an epilogue now, surely?), Spratt has teamed up with a cybernetics man named Baron Strucker the Fifth. Strucker immediately punches him in the face, then tells the unconscious Spratt that he will use Death’s Head’s body to have revenge on A.I.M. 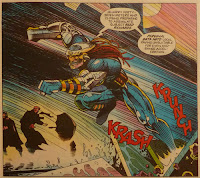 This issue was a straightforward romp and fairly enjoyable. There is some nice characterisation, a fair bit of action and a good undercurrent developing. The main drawback is that very little of this seems to benefit the title character.

Despite his impressive entrance, Minion is the adversary of the story, a problem to be overcome. He is single-minded in his pursuit of Reed, and his ‘scrambled programming’ means he only speaks in basic operating terms. The result is that he shows even less personality that in the previous issue.

The de-scrambling at the end of the issue does mean that Minion’s evolution is moving forward and that Death’s Head is now apparently in control. He is also far more formidable that his predecessor – dispatching Thing and Torch with ease (and while the Torch fight was funny, it was also a bit of a waste). Although since a character can always be as powerful as the writer needs him to be, that’s not so impressive as I found it to be in 1992 (and not being able to run on paving slabs seems something of a design flaw).

The story actually belongs to the more flawed Dr Necker, and is better for it. The “Come with me if you want to live” device is played out nicely between herself and Richards, two scientific minds working on a common problem, but with very different moral perspectives.

I enjoyed Necker’s rationale that, as he was from the past, Reed was ‘dead anyhow’, which justifies sending Minion back to assimilate him. Although, once again, the 2020 setting seems too close to the present for this – even if Reed had died in the intervening years, he would still have seemed like a ‘real’ person. But this amorality gives Necker some good contrast – while technically working for the villains, her dedication to preventing A.I.M.’s destruction is heroic. Her genius-level intelligence is balanced by a certain lack of foresight, meaning she is always improvising to avoid (or chase after) Minion, and it makes for a fun trip.

There are some inconsistencies with the story: it makes sense that Death’s Head’s robotic personality would scramble Minion’s programming, but why would chasing after Reed Richards be viewed as a malfunction – wasn’t he the next target on the list anyway? It’s explained that Death’s Head’s motivation is to hunt (which is only partly true, as The Body In Question made clear), but then Minion’s main drive is to assimilate, so this seems like splitting hairs. 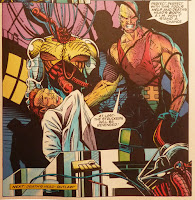 Also, Necker wants Minion to obey her orders, but she also wanted him to assimilate Richards, so her concern for Reed’s survival is a bit inconsistent. It could be argued that she is prepared to forgo Richards’ assimilation in return for regaining control of Minion, but this never seems to be her motive. The story ends where it begins: with her chasing Minion through time.

The first interlude is well done – and it was nice continuity for Abnett to bring in Spratt. His plan to resurrect Death’s Head is intriguing, and actually quite moving (more so than most of his other appearances). The close-up of Spratt’s face shows a real sense of loss for his partner.

The closing interlude is more ham-fisted: it’s odd that Spratt needs a “good cybernetics man” when he himself rebuilt and improved Death’s Head the last time around. And since Baron Strucker V plans to have Spratt help him, punching him unconscious just so he can monologue his evil plan seems ridiculous melodramatic. 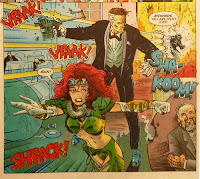 The artwork is an improvement this issue. The characters are all well-rendered, and there is now a consistent look for Necker. Sharp is easing up on overcrowding scenes with needless clutter, although there are still too many unnecessary scratchy lines for my taste. The rainstorm and various bursts of smoke and electricity are nicely atmospheric.

The biggest let down, once again, are the depictions of movement. All the characters have a tendency to look awkward, particularly when running, which is unfortunate in a chase story.

Next week: We meet Minion and his Merry Men as Death’s Head II turns “Outlaw!”

I got this series originally because I was a massive Death's Head fan, and just wanted to see anything with him in. Disappointed but willing to accept his demise in the first issue I continued... and quickly wondered why. The art work is scrappy, typical of the more "gritty" style being incorporated into titles such as X Force and Namor at the time, but lost on me. I missed Geof Senior and slowly grew to hate this series.

Many of the tie-in material using Minion was better rendered, but this was just a little untidy for my taste.