I seem to writ 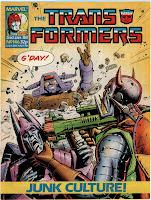 e a lot of these but once again apologies for the irregular nature of this column lately. I've had a lot of unexpected events in my non-Transformers life but hopefully I've got some breathing room this week to keep to my regular schedule.

The Legacy Of Unicron! Part 1 was written by Simon Furman, pencilled by Geoff Senior, coloured by Steve White and lettered by Annie Halfacree.

The cover was by Lee Sullivan and unfortunately isn't particularly brilliant. Death's Head does look suitably confused by the Junkion's sudden appearance but the background is severely lacking which at first glance could make it seem as though the Junkion is bursting out of thin air. A silly speech bubble and a pointless caption conspire to add to the generally lacklustre nature of the image.

Making a return to 2008 we find Cyclonus and Scourge locked in mid-air battle with Death's Head's personal spacecraft, over the planet of Junk.

Scourge is forced to crash but Cyclonus manages to pull up just in time and leave him to his fate. Cursing his partner, Scourge transforms and prepares to continue the battle on foot. He faces down the ship, wondering why it's not reacting, before a voice behind him confirms his worst fear - the spaceship was on autopilot and Death's Head has got the drop on him.

Scourge falls pathetically to his knees and begs for mercy. Death's Head is disappointed in his prey's lack of spine but it is revealed to be a ruse as Cyclonus, still in plane mode, loops back around and strafes the bounty hunter, forcing him to dive for cover.

Scourge gets a good moment here where he mocks Death's Head's lack of foresight: "Hoped for more intelligence, yes?" Death's Head's agility gets him out of a jam as he manages to get Scourge to keep his head down with a well-placed shot.

He launches a missile that Cyclonus easily dodges, mocking him for his aim. Cyclonus is forced to eat those words, however, when the missile changes direction to follow him, drawn by the heat of his jets! In a moment of comic-book physics Cyclonus transforms at the last minute to kill his jets and the missile barely misses him. It doesn't help him much, however, as this distraction is enough for Death's Head to crack him over the head with his mace.

Just as Death's Head is about to finish him off a Junkion appears and begs him for help, telling him that he is the last of his people who still retains his free will, all the others have been enslaved by "a being of vast power." Death's Head is interested but won't do it without there being a profit in it, so the Junkion points out that his people are among the richest traders in the galaxy.

Death's Head agrees to help and goes back to finishing off his previous job but the Junkion tells him to stop, as he may need the help of Scourge and Cyclonus to be victorious.

Meanwhile, on Cyberton, Wreck-Gar is planning to leave for his homeworld. Rodimus Prime thanks him for all of his help and the two part on friendly terms.

Back on Junk, the Junkion and Death's Head have hatched a plan. The Junkion is going to pretend to be enthralled and lay explosives near the still unnamed target. It turns out that the Decepticons have woken up and agreed to help distract the enemy in exchange for Death's Head giving up his contract on their heads. Death's Head agrees, but has no intention of keeping his word, as giving up a contract could be bad for future business.

The flying Decepticons begin their attack and Death's Head goes into action, hoping to get close to the t 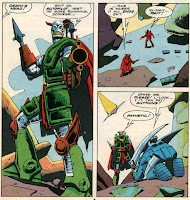 arget without being notice (I love Senior's panel here of the bounty hunter vaulting some cover). Before he can make a move, however, he is surprised to see the lone Junkion from early running towards him.

The Junkion can only cry out that "He knows!" before he is blasted to pieces by a beam from off-panel.

A booming (well, the speech balloons are wobbly and ringed in black) voice from off-panel explains that the Junkion was always under it's thrall and that this has been a trap to ensnare their minds.

We finally get the title of the issue, unconventionally, on the last page as we are presented with a splash of a horrifyingly familiar gigantic horned head. The Legacy Of Unicron.
After the Christmas embarrassment of Stargazing this story is shaping up to be much more Furman's usual speed. Returning to the future timeline divorces Legacy Of Unicron effectively from the more Earthbound US stories and gives Furman a lot more room to flex his creative muscles.


In truth, it's a little surprising that Budiansky didn't more readily embrace the Movie characters given how well the film opens up the universe for storytelling possibilities. Then again, Budiansky has gone on record about disliking the pressure of having to introduce whole lines of new toys at a moment's notice so perhaps he would have got there in good time if he had continued with the book. In any event, his disinterest in the future of the universe gave Furman a pretty free ride when it came to telling his own stories and most of Furman's multi-part epics were largely based in this setting. 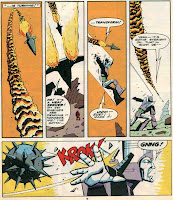 Reading this as a Transformers fan in 2011 gives it a slightly unusual air that it would not have had back in 1987. These days, Unicron is a mythic figure, a universal singularity. It is seemingly impossible for a Transformers series to get to a certain length without an appearance by him being at least teased, and often he is the focus of much publicity and hype-building (although there were no such plans to feature him in Animated, no matter how many seasons it got). I am not precisely stating that these things are boring - Unicron is pretty exciting - but they're part of the furniture now. In 1987 there were no such rules. No-one had any idea who Unicron was, and the cartoon's explanation for his origins was far too weak for a storyteller of Furman's sentiments. It is therefore, unthinkable, in 2011, that the junior partner, as Marvel US must have considered Marvel UK, would be allowed to take Unicron and do a multi-issue story with him, completely out of the blue, that would never be published or even alluded to in the United States.

What we have is an entertaining continuation of the Death's Head storyline from Headhunt that keeps us interested until the shocking last page, when, suddenly - Unicron! That would never happen now, and maybe it should.

Although the potential for future story developments is obviously huge, the issue itself is mostly interesting for the further glimpses it gives us into Death's Head's character. I especially like his decision to kill two birds with one stone and use Scourge and Cyclonus as much as necessary. His code might not be anyone else's idea of honour but it works for him. I also like the fact that he is not swayed by the Junkion's pleas. Death's Head, at least in Transformers, does not have an ounce of sympathy within him. Time and again in fiction this sort of character is eventually persuaded to fight for something other than money but that won't work on Death's Head, and why should it? He's a mechanoid, built and programmed to kill for a profit.

Death's Head's usual entertainment value aside this issue really turns on its final page, so much so that everything leading up to it is readily dismissed as simply moving game pieces to get them into position - an analogy that Unicron himself would no doubt agree with. It's necessary, intriguing, and well-written but the impact of Unicron's devilish visage is such that it hardly matters how we arrive at that point.
Senior's artwork is extremely good, as we expect by this point. Once again, it is in action scenes where he comes into his own, using crisp, strong lines and iconic poses to clearly tell a story. His linework is by no means photorealistic, but where would the point be in that? If comic books were aiming at such realism, why would we even be reviewing them for their art? Senior has a knack at getting to the heart of the drama, sometimes using perspectives and poses that aren't often used by his peers.

Overall an excellent start to Furman's next big multi-issue epic. Who can resist the possibilities inherent in a clash between Death's Head and Unicron?
Posted by Bishbot at 12:25 PM

what I loved about this storyline is that it took the basic premiss of the TV episode "ghost in the machine" and turned it into something decent. The idea of the return of Unicron using another planet to form a new body (here it's Junk in the TV show it was Cybertron) was trivialised in the TV show (mostly by it being yet another Grimlock dufus style story.), but here it was a horrifying plot twist.

Yes, great review (and insight). Art is about the perception (of the artist or the viewer), not the 'reality'. From the panels you show, Geoff did an exceptional job.

"In truth, it's a little surprising that Budiansky didn't more readily embrace the Movie characters given how well the film opens up the universe for storytelling possibilities."

Honestly, I was never surprised, simply because I always assumed that the movie was firmly "cartoon," and not at all in the comic universe (the adaptation notwithstanding). While Furman clearly saw some potential and ran with it (and good for him!), I never saw any reason (especially never having known what the UK was doing way back then) to assume that Budiansky ever would have used a movie-esque future....

Furman has been quoted somewhere that he just used the characters without looking at toy catalogues or anything official from Hasbro, so I'm guessing as soon as he was aware of Galvatron, Cyclonus, Scourge, Rodimus, Kupp, Blurr and Ultra Magnus, he automatically wanted to play with those characters, irrespective of whether they were intended to be officially comic book cannon or not. I loved the fact he tended to fill in the blanks of my toy catalogues using characters the US comic seemed to be ignoring. Name me one issue written by Budianski that featured the likes of Top Spin, Whirl, Chop Shop or Galvatron?

The only downside was the you had this entire 2005 universe that Furman built up over 2 or 3 years that was just completely negated the second he started writing for the US title. Very frustrating.

"I was never surprised, simply because I always assumed that the movie was firmly "cartoon," and not at all in the comic universe" -

Fair point but I was referring to characters and locations more than the actual plot. I mean, the toys were out there.