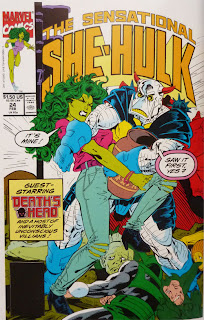 Death’s Head’s only other guest spot was in Sensational She-Hulk #24. The choice of title is perhaps unsurprising when you learn that Simon Furman was the writer and Bryan Hitch the penciller. In addition, John Beatty was inker, Glynis Oliver colourist, Jim Novak letterer and Bobbie Chase was editor.

The cover is also by Hitch: She-Hulk and Death’s Head are grappling over a large vase, speech bubbles arguing, “It’s mine!” and “Saw it first, yes?”, and standing over a heap of defeated villains. The caption spells all this out for us: “Guest-starring Death’s Head (even using his own logo) and a host of inevitably-unconscious villains!”.

It’s not the most inspiring cover, particularly after some of Hitch’s other efforts. She-Hulk and Death’s Head don’t look particularly engaged in fighting each other – she’s has an awkward one-leg-in-the-air stance, and it’s hard to tell if he’s throwing a punch, or trying to push her away. The idea of the lead characters squabbling while villains are littered around them is fun (reminds me of Asterix and Obelix), but I don’t think it works particularly well here.

We begin with an art expert appraising a large blue vase, declaring it to be C9th AD ‘Muk Noo’ (a made-up Chinese dynasty – I guess in the days before Google, writers could get away with that). A bored-looking She-Hulk asks if it is worth anything, only to be told that it is “Priceless!”

She-Hulk leaves the museum, trying to come to terms with becoming instantly rich, and wondering if she should quit lawyering. Her mind wanders to her last case: her client was framed by a criminal named Bono (judging by the art, this was not the lead singer of U2), who destroyed the evidence incriminating him, then taunted She-Hulk about her failure.

Her musing is interrupted as She-Hulk is bumped by a skateboarder, and has to perform some acrobatics to keep hold of the vase. Regaining composure, she is unaware of a gang watching from the shadows and that tree branches have come to life, which narrowly miss grabbing her. The leader of the shadowy group bemoans hiring “bargain-basement bad guys”.

We leap ahead to the future: a graveyard in 2020. A tough guy in a yellow overcoat is escorting Cushing, a nervous informant with a price on his head and a desire to flee the city. They notice a freshly-dug grave, with ‘Death’s Head’ (and his logo) carved on it. Out from the earth springs the mechanoid, shrugging off the tough guy’s submachine-gun fire before killing him with one blow of his mace.

He captures Cushing, then hands him over to his client: a smartly-dressed woman. She takes custody of Cushing, who she wants to testify, and offers Death’s Head another job: to locate and retrieve a large blue vase.

Back in the present, She-Hulk is being bustled out of a crowded subway, still holding the vase. She is picked up by a sudden gust from the super-villain Whirlwind and confronted by his accomplices: Lightmaster, Radioactive Man and Plant-Man. Unwilling to risk breaking the vase in a rumble, She-Hulk is knocked to the ground. Bono arrives and tries to take the vase, indicating that he is the employer of the four super-villains. She-Hulk loses her temper and quickly beats up the quartet, until only she and Plant-Man are left. He sheepishly admits that he can’t attack her in the middle of the street – no plants!

Safe in her apartment, She-Hulk promises that she won’t let anyone take the vase from her. On cue, Death’s Head bursts through a window, riding the TVA rocket cycle from his previous adventure. He snatches the vase, scoots into the air, but the time machine fails to work. He admits that he couldn’t expect better – since he stole the rocket cycle from the Time Variance Authority.

Enraged at the mess caused to her apartment, She-Hulk leaps on the cycle and they both tumble to the ground. As they pick themselves up, vase somehow intact, Bono sees them and sends his super-villains to attack. Death’s Head and She-Hulk forge a quick alliance and they despatch the four in a single page.

She-Hulk then heads for Bono, who threatens legal action if she hits him. Seeing that he has won, Bono can’t resist another taunt, which provokes She-Hulk into smashing the vase over his head (doesn’t that count as hitting him?). This reveals that a 5¼ inch floppy disk was hidden inside. 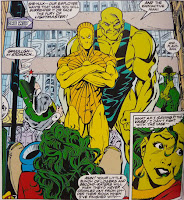 Days later, She-Hulk gets a letter with a 2020 postmark. It is from Death’s Head’s client: a prosecuting attorney who had gathered evidence against future-Bono on a floppy disk. Concerned that he would try to destroy it, she placed it in her family heirloom, then sent it back to the past – to the attorney that inspired her. Bono also found out and sent his past self to destroy it (hence the super-goons). The letter ends by saying that, evidence retrieved, Bono has been convicted – and the look on his face was … priceless!

Considering this issue reunited Furman and Hitch, two of the key Death’s Head creatives, I was expecting to like the story a lot more than I did. As a guest star, the mechanoid doesn’t add much to the mix, nor does he really sell himself as a character.

To begin with She-Hulk: this was Furman’s first of a 4-issue run on the title, so I can appreciate he was getting a handle on the character. But my take on the Sensational She-Hulk was that its humour was a lot more free-wheeling, disregarding the fourth wall and winking at the audience. This version of Shulkie is too introspective, quietly brooding on her failure. There is some slapstick involved with the vase, although I’m not convinced that She-Hulk would be pushed around by skateboarding kids or bustling commuters. In fact, the funniest joke in the issue comes from a peripheral character Plant-Man’s look of silent hopelessness as he sees a passer-by with a potted plant.

As a simple MacGuffin chase, the plot had potential, and I liked the random assortment of second-rate villains (Furman being a practised hand at utilising overlooked characters). But trying to incorporate the future plotline complicates things into a bit of a mess. It doesn’t make much sense that the future attorney would utilise time-travel and a priceless relic to hide a piece of information that can easily be copied and secured in her own time (even the Bono of 2020 is just a criminal, not an all-powerful supervillain); or that she would choose a time period where Bono is actively able to chase after it; or that if Bono was able to communicate with his past self, he wouldn’t be able to avoid his future fate. Moreover, I don’t see how allowing Bono’s criminality to prosper for 30 years is somehow a victory of She-Hulk.

I know time travel stories are often a continuity headache, but it seems that the final panel was written first (neatly tying up Bono’s ‘priceless’ defeat) and the explanation was made to fit. Even the mysterious letter with the ‘2020 postmark’ seems back to front – the usual convention for time travel is that correspondence lies dormant for decades, then appear at a letter date (so the future lawyer should get a letter from She-Hulk with a ‘1991 postmark’) – or can the postal service of 2020 work back through time?

I guess the reason to get mixed up with time was to incorporate Death’s Head. But this guest spot doesn’t really showcase him. The graveyard ambush was a nice touch (and in keeping with his love of surprise tactics), but the fight dragged on for a page too many. After that, he doesn’t have do too much other than appear in She-Hulk’s era, make a grab for the vase and join a half-hearted battle with some already-beaten bad guys.

He doesn’t really interact much with She-Hulk, probably because their common ground is tenuous. Time-travellers like Doctor Who and the Fantastic Four have a good excuse to adventure with him; mercenaries like Iron Man 2020 and Big Shot have motivation to butt heads. It might have been better to make Death’s Head a straightforward enemy of She-Hulk (working for future Bono perhaps) and just let them go at each other.

Another odd point is how little the character of Death’s Head comes across. There’s not much evidence of his humour or cynicism here. Even his stealing of the TVA cycle seems an out-of-character move: though he’s not averse to bullying free stuff (whether three quarts of oil or half of Keepsake’s gold), he doesn’t usually stoop to outright theft.

Hitch’s artwork seems to have evolved into a more rounded, cartoonish style that I think would have benefited from heavier inks (the splash page close-up of the antique vase looks especially bland). The movement and rendering of the characters is good, although the action scenes feel a bit light: as if some of the punches aren’t really connecting. There is some nice detail work: I particularly liked the reflection of She-Hulk leaping towards Death’s Head’s chrome face.

Next week: Death’s Head finds himself at the business end of a hunt in Marvel Comics Presents #76: “The Deadliest Game”

I still remember the first issue of She-Hulk! John Byrne was/is always great at grabbing the audience's attention. I remember this series as being completely tongue-in-cheek all the time, kind of like a super-hero sitcom.

I didn't realize Furman wrote for this too?

Didn't this issue and a whole load of others get wiped out of continuity by John Byrne?

Now if only we could Byrne other weak stories away...

That’s right, Tim. John Byrne left Sensational She-Hulk at Issue #8, picked it up again at #31 and retconned everything in between as a ‘dream’ (so technically, this Death's Head adventure never happened).

It’s one way of cutting through a Gordian Knot of continuity, but it doesn’t seem fair to the writers who worked on those 23 issues (or, for that matter, the readers who bought them).

kind of fits that it actually was a dream, since if these were the "lamest" villains Marvel had to offer, why were former big leaguers like Radioactive Man included? and didn't Light master almost kill Spider-man?

it could still be considered canon for death's head if you consider his reality jumping could have included the dream scape...

though actually it's probably for the best this was forgotten, since it leaves a big open gap for someone to write more stories with death's head working for the time variance authority otherwise.

Even Byrne used second stringer villains in his own story's truth be told, which may be where Furman got the original idea to do it. I didn't realize he'd retconned the continuity though, but it makes sense knowing Byrne's history. He tended to do that with almost everything he worked on.

i inked all but 2 1/2 issues of Bryan's she hulk run: the first issue he did,which Bob Wiacek inked, the hercules issue that John Beatty inked, and on Bryan's last issue i forget who,but the last 5 or 6 pages were either co-inked or completely inked at the bullpen at Marvel-so the "light inking" on this story was my fault
best
jim sandersIII