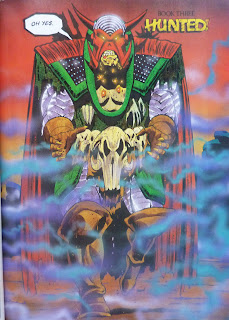 The third and final part of the Death’s Head graphic novel was written by Simon Furman, art by Geoff Senior, letters by Helen Stone and Steve White was editor.

The setting is the strange dimension of Styrakos, but not where we left off. Death’s Head is staggering through a rocky wasteland as the captions narrate his dire straits. Unsurprisingly, Furman’s description of robotic life is first-rate, “A circuit fuses. A hydraulic muscle stiffens and locks. A servo motor sputters and dies. A final reserve system ebbs and fades…”

The mechanoid is babbling to himself and, in a nice touch, repeating punchlines from his earlier adventures: “Excellent party superb food, but must fly...”(4), “Your mothers never teach you to knock...”(6), “Your interior designer...” (9). Before he can regain his senses, the hunter catches up with him.

We get a splash page of Lupex stalking out from the mist. After the teaser of the previous book, this full portrait is magnificent. Both decayed and menacing, his armour reminiscent of Death’s Head, yet decorated with the claws, teeth and skulls of his former kills. Eyes glowing with magic, skin rotting off his bones, Lupex really is the stuff of nightmares (one of the reasons I didn’t think much of the cover was that it didn’t do justice to this antagonist).
Lupex uses his magic to topple Death’s Head, and reaches out to the limp body – only to be surprised by a desperate strike of his mace. By the time Lupex recovers, the mechanoid has gone. Apparently a ‘zone turn’ has occurred, switching from ‘majik’ to ‘techno’, which has given Death’s Head enough of a boost to escape.

As Lupex stalks across the bizarre landscape, he examines his decaying flesh. Time is running out for him, but that very danger gives this hunt more thrill. He flips out a number of ‘techno’ weapons and annihilates the scenery, repeating “The body. The body.” as an obsessed mantra.

Crawling from his hiding place beneath a pile of rubble, a battered Death’s Head concluded that this twisted hunter is a dark side of his own predatory nature, and must be conquered. We flashback to end of Book 2: after the mechanoid has just been transported to Styrakos. Lupex is explaining that Pyra believes he has possessed Death’s Head, which explains the attacks on him. Now thwarted, she will take out her vengeance on Spratt and the vulture. Death’s Head expresses regret about the vulture.

He goes on to talk about Styrakos, and how he is the ‘Ty Rejutka’, wielding the power of majik and techno. Such power is too much for mortal flesh to contain (which explains the decay) and Lupex has been repeatedly transferring his soul/essence to a new body (hence the victims of his hunts), ditching the previous worn-out one. As a solution, he created a metal body to contain his power forever: Death’s Head.

Playing for time, Death’s Head asks why he was given a personality, and Lupex claims that he was given thought and taken away by someone else. He had originally assumed it was Pyra, although her assumption that Lupex had possessed Death’s Head refutes this. He also remembers how Pyra seduced him for the secrets to his power and how he repaid that betrayal (we don’t see how, but Lupex is revealing the face beneath his mask, which is horrifying Pyra).

Death’s Head springs his attack – and his axe is vapourised by Lupex’s eye-beams, who then angrily zaps him against a wall. Undeterred, Death’s Head attaches his shottblaster – which fires a dud. The zones have changed from techno to majik. Lupex marvels at their randomness, before flinging Death’s Head out, declaring the hunt has begun!

Back in the present, Death’s Head is working on a plan. His complete rebuild in 8162 has given him a technological advantage over Lupex, whose arrogant superiority could prove a weakness. He is caught again by Lupex, who challenges him to stand and fight for his body. Unwilling to accept such a disadvantage, Death’s Head flees.

Following him across a twisted road through a boiling lake, Lupex gloats at his greatest achievement – to have broken such a proud hunter. Circuits dying, Death’s Head staggers up the stairwell of a tower. Lupex is in close pursuit, his taunts booming up the stairs.

Finally catching Death’s Head, Lupex holds him by the throat and prepares to possess his body. Lupex suddenly stalls when he realises that his majiks are not working – whereas Death’s Head’s retractable blade works perfectly. He stabs Lupex through the heart, causing him to disintegrate in a cascade of energy. 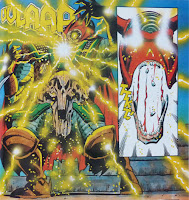 Lupex falls from the tower, as Death’s Head explains that his onboard computers were able to track the pattern of the zones, allowing him to lure Lupex into a zone change. He considers leaving Lupex to suffer an agonising death, but realises that would make him a sadistic hunter, just like his father. With an executioner’s strike, he completes his personal triumph – killing only for profit or survival.

He is teleported back to 2020 by Pyra, whose previous wrath has been replaced with beaming pride. She explains that her ‘mistake’ that Death’s Head was her husband had been a ploy to trick Lupex into summoning the mechanoid into his own dimension.

Pyra adds her side of the origin story: she did come to Lupex to steal his secrets but, repulsed by his decaying form, took her own consort that she eventually came to love. When Lupex found out, he not only killed her lover, but possessed his body (we see the moment of shock from the earlier flashback, this time from Pyra’s perspective).

Wanting revenge, Pyra sabotaged the metal body – making it a hunter, but with a mercenary personality that would fight back against being possessed and kill Lupex. Before that could happen, someone else stole the mechanoid, forcing Pyra to conduct this entire charade. She departs, warmly congratulating Death’s Head, and telling him to enjoy his well-earned freedom. Spratt, who has just recovered his senses, entreats Death’s Head to kill her. But not only is there no profit in doing so, but Death’s Head admits that he admires her. He shrugs his shoulders, “Huh! Parents, yes!”

A magnificent final chapter to this fantastic graphic novel. After building up for two-thirds of the story, Furman saves the best for last, delivering an exciting, interesting and satisfying finale.

We finally learn about Death’s Head’s origins: not a true robot, but a hybrid of magic and technology, given a hunter’s shape and a calculating soul by two parents at war with each other. Though none of this is mentioned in earlier issues, his subsequent theft by ‘persons unknown’ allows it to fit into Death’s Head’s early memories of a ‘programmer’. Personally, I’m happy to accept that a good story can overrule continuity problems.

We only get hints in the first two books, so this is where the whole story of Lupex and Pyra comes out. The story is a deliciously Shakespearean one of power, double revenge and murdered lovers. Although the notion of a ‘hunter’s dimension’ is a common one (Dr Who’s Survival and Generation 2’s Primal Fear spring to mind), Styrakos is a nice conceit. The vacillations between magic and technology are interesting, as is the idea that to wield both requires a physical sacrifice.

As for the Ty Rejutka himself, Lupex makes a great villain. The idea that he has been constantly swapping bodies to survive gives a great twist to the ‘remorseless hunter’ archetype (unlike say, The Predator, who seems to just collect skulls). It also nicely erodes any humanity, explaining his strange speech pattern (moving it beyond a mere gimmick to link him to Death’s Head) and the constant obsession with hunting and ‘the body’.

This issue also rounds off Pyra, although it was always hinted that she was more than a one-note vengeance character. Her scheme is a complicated one – although it does makes sense in order to dupe Lupex into lowering his guard. Less clear is why she would need to make Death’s Head a ‘businessman’ in the first place (to defeat Lupex, surely an independent personality would have sufficed?). Although her wish to make Death’s Head an opposite to the wanton Lupex just about justifies it. The maternal pride she displays is fun, and there could have been more mileage in further stories with her and Death’s Head.

And Death’s Head gets to face his own extinction and triumph. I like the idea that his ‘dark side’ is to hunt for pleasure – and it’s something that’s alluded to as far back as his encounter with Doctor Who. At a stretch, you could even say it’s why he insists on being a ‘freelance peacekeeping agent’, rather than the more predatory title of ‘bounty hunter’.

The entire issue is basically one long hunt, and it does a nice job of cranking up the tension – Lupex getting ever-closer as Death’s Head gets weaker. It’s a little jarring to begin in media res when none of the other chapters have used it. I think I would have preferred to continue events in sequence, so we would begin unsure of Lupex’s intentions, or how totally outmatched Death’s Head is. But the opening is atmospheric and, taken as a serial rather than a graphic novel, works very well.

It’s good that the confrontation with Lupex didn’t end in a titanic battle (since we already had that with Big Shot in the last book). I liked the twist that Death’s Head is able to outsmart Lupex because of the 8162 upgrade – in the idiom of the hero’s journey, he has returned stronger from his adventures to defeat the evil tyrant. 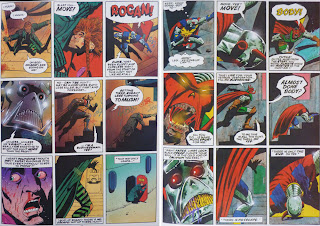 There’s no further praise I can heap upon Senior’s artwork – it really is sublime and probably the best I’ve seen him produce. Lupex gets the most attention here, and the imagery really gets across the power of the hunter, as well as neatly mimicking Death’s Head’s silhouette. From smoke to lava to magical energy, there is some great work with line and colour here.

One page I especially liked was Lupex’s pursuit of Death’s Head up the stairs – a frame-by-frame match of Death’s Head pursuit of Rogan in Book 1, mirroring the two hunters. It’s the kind of device that only works in the medium of comics and it’s done here to great effect.

Next week: Back in business, Death’s Head teams up with the Fantastic Four, Iron Man and Thor as they take on the Council of Cross-Time Kangs!

The Body In Question, Part 3 was republished ‘Death’s Head Volume 2’, and in a larger format in the original graphic novel.

I didn't pick up on the fact that his rambling was taken from earlier adventures! Clever, Furman, clever!