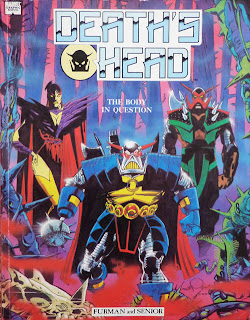 At last we get to the Death’s Head graphic novel. Published about a year after the series folded, it was also serialised in Strip, a large-format UK anthology magazine, from #13-20. As you’d expect, Simon Furman was the writer. Geoff Senior is credited as ‘artist’ (which here encapsulates pencils, inks and colours), Helen Stone was letterer and Steve White editor.

The cover is another by Walter Simonson: Death’s Head is front and centre, advancing through an alien jungle with eyes burning and mace attached. Two others stand behind him: a woman in an outlandish cape and a man in green armour and a horned and tusked helmet (that’s as far as I’ll go to analyse them, since their very presence on the cover is a bit of a spoiler). It’s a moody cover, but not a terribly exciting one. Death’s Head’s proportions are too beefy, the mace too large, and there's no sense of the characters doing anything other than posing for the picture. It would have been a passable cover for the series, but falls short compared to what’s inside.

We begin in the same alien landscape, poetically described as, “A place that is not a place. A time where time has no meaning.” An exhausted man is fighting his way through the tough vegetation, desperately trying to escape an unseen foe. He takes an unexpected fall into a pool of red goo and is caught by his pursuer: we only have a glimpse of a clawed gauntlet as he gloats, “Good hunt. Oh yes. Not great. Good.”

Angered, the man turns to fight, but his wrist-mounted blaster fails to ignite. As his pursuer lifts him by the throat, he declares that the day is not ‘techno’, but ‘majik’ and engulfs both of them in white light. When finished, the pursuer adjusts his gauntlet (we catch sight of a red cape, metal-banded arm and back-mounted axe), declaring, “Good fit.” He walks away, leaving a desiccated corpse in his wake. "Oh yes."

Back in New York 2020, a man named Rogan is also trying to escape pursuit. He tries to boost a car, but is caught and dragged through the windscreen by Death’s Head. We get a lovely splash page as the mechanoid beats up on Rogan, accompanying it with a number of car-based puns. Rogan fights back with some energised brass knuckles (a ‘lectronux’ - I did enjoy that name) and flees, accusing Death’s Head of dragging out the hunt for his own pleasure.

This accusation actually stings the business-orientated mechanoid, but he pursues Rogan up a stairway, shouting taunts at the exhausted man. Reaching the roof, Death’s Head finds himself at gunpoint from an airborne policeman who Rogan has deceived into protecting him. With a raised eyebrow and a weary “tk”, Death’s Head coolly explains the situation. Using the distraction, Rogan fells the cop, steals his hoverpod and scoots away, swearing vengeance on the bounty hunter. 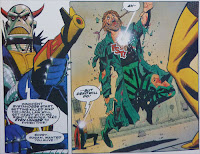 He has barely travelled any distance before his mistake becomes evident: “I am not a bounty hunter, right?” Powered by boot-jets, Death’s Head pounces on him and the two tumble to the ground. Rogan recovers first, running towards a woman who has come out of her home to investigate the commotion. Wanting to avoid a hostage situation, Death’s Head chooses the most expedient method, attaches his shottblaster, and shoots Rogan dead.

Standing over his prey, Death’s Head tries to reassure the would-be hostage, only to receive a tirade of abuse. The woman was Acid Alice, an accomplice that Rogan had been fleeing to, and she also claims that Death’s Head was hunting Rogan for sport.

As the cops come to arrest Alice and collect Rogan, they commend the mechanoid on his good day’s work. But Death’s Head wanders off alone and glum, wondering if Alice may have been right about him. He does cheer up, however, when he remembers the best thing 2020 has over 8162: no Spratt.

On cue, we see Spratt down at the waterfront of the Los Angeles Resettlement 8162, holding a bunch of flowers, ready to keep the date he made in Issue #9. He recaps what has happened, and wonders what he is doing here: curiosity as to what kind of woman would fall for Death’s Head? Or is he jealously hoping to woo her himself? He concludes that this was a huge mistake, but just as he begins to squabble with the intruding vulture, his date shows up.

Pyra, a statuesque woman in a shimmering cape, demands to see Death’s Head – her husband! Spratt recovers his speech enough to apologise, but Pyra is out for vengeance and uses magic to summon shadow-tendrils to seize and choke Spratt. She repeats her demand in two languages, “Ska jiytska Lupex? Where is Death’s Head?”

Realising Spratt knows nothing, Pyra is about to dispose of him when a laser blast narrowly misses her. She again calls out, “Lupex?”, but in leaps Big Shot, fully recovered from his injuries and twice as deranged. He’s also out for revenge and sees Spratt as his way to Death’s Head.

As Big Shot drools to himself about his vengeance, Pyra decides to manipulate him for her own ends. She points out that Spratt – having remotely summoned the DHII spacecraft – is escaping. Bundling inside with the vulture, with Big Shot clinging to the outside, Spratt wonders aloud if Death’s Head has travelled through time again.

Hearing this, Pyra correctly deduces that Death’s Head has indeed skipped through time and quickly whips up a portal. The spacecraft vanishes through it, as Pyra commands Big Shot to find Death’s Head, and kill him!

As the first of the three-part story, this is all about moving the pieces into position. And appropriate to the title, all the sub-plots involve hunters. The prologue hunt is a complete mystery, but atmospheric and interesting – giving us a taste of a character who looks and sounds intriguingly similar to Death’s Head.

The main part of the story is the ‘business as usual’ hunting of Rogan, and it’s very well done. Unlike some of the goons Death’s Head has captured in the past, Rogan is nicely fleshed-out. While not exactly a pleasant character, his vicious desperation to escape feels very real and the clinical way he is executed is something of a jolt.

There are very clear parallels between Rogan and the unnamed quarry of the prologue – both panting for breath, hoping they have lost their pursuer, both found and seized by the throat (in a nice visual touch, they even have a similar hats). The main difference is that one is caught by someone who enjoyed the hunt, the other by a mechanoid who rejects hunting for pleasure – a theme that gets developed through the story.

As an aside, Acid Alice’s accusation that Death’s Head hunted for sport seemed a touch too on-the-nose. She’s understandably angry, but it’s an odd line to take – especially as it conveniently preys upon his own doubts. Surely she’d just keep spitting nonspecific curses at him?

However, it does make for a nice character point for Death’s Head: killing Rogan when he meant to capture him is a nice way for him to win-but-lose, and questioning his business ethics is perhaps the best way of finding some angst beneath the usually-cool exterior. I like the fact that, in this story and the previous one, he seems to have been pretty well-received by the people of 2020, but it is understandable that he is getting tired of having no roots (or at least having to constantly purchase new offices and spacecraft). Though nothing important has yet happened to him plot-wise, dramatically he is ready for a change.

The final part of the story explains the epilogue that ended Issue #10. Spratt’s curious-jealous reaction to Death’s Head's supposed ‘girlfriend’ is entirely characteristic, given his almost hero-worship of the mechanoid. Big Shot’s return is also a welcome one, although despite his physical threat, he looks more likely to be a spanner in the works, rather than a main antagonist.

Pyra is probably the most mysterious element in the story – her motives are difficult to comprehend, and her thoughts indicate that she’s playing a hidden agenda. She also seems to be the most powerful and manipulative player in the game, with an unclear connection to Death’s Head (unless you accept that he is really her ‘husband’).

Senior’s artwork is breathtakingly good, some of the best I’ve seen. Handling every aspect of the art, and presumably given more time to produce it, every page is a feast for the eyes. From the dream-like iridescence of the prologue, to the polluted waterfront of 8162, the shades and colours used for these settings are magnificent.

I’d always liked Senior’s action scenes – and there are plenty of them – but there is also some excellent detail work: the close-up blood and sweat on Rogan, water dripping from the emerging spacecraft, glints of light on the metallic skin.

The Strip magazine was aimed at more mature readers (a sort of 2000AD for Marvel), and it shows here – the violence is a little harsh, the language a little stronger and the overall mood somewhat less comical (though the jokes and character humour is still there). This is not a bad direction for Death’s Head, and entirely suitable for the less-cartoony artwork.

The Body In Question, Part 1 was republished ‘Death’s Head Volume 2’, although it's worth looking for the original graphic novel (a larger print and slightly better reproduction).

There's lots of continuity issues with this series, many wind up being fairly spoilerish so sorry if anyone is waiting for part two to learn what happens next.

Death's head is meant to be a replacement body... but he's a mechanoid not a cyborg right? ok ignoring that, he was also originally a giant robot, yet the creature who he was supposed to be the replacement body for is human sized... ok that could also be an intended upgrade that was upset slightly be the events of 8162, but here is the real fly in the ointment. He was originally from 2005 of the transformers future, yet here he is in 2020 of the Marvel universe future and meeting his creators...? sorry not getting that one.

it was also a bit of a "huh?" moment for me when I discovered what was happening with Sprat and the vulture, or rather didn't. big gap in continuity there, huge in fact.

I suspect body in question was intended to cement Death's head into the Marvel universe and as such ignored his previous time / reality jumping. shame as that means he never really did meet the doctor or face off against Galvatron.

Regarding the above, isn't it mentioned in the Incomplete Death's Head framing stories that the Doctor enlarged Death's Head and transported him to the Transformers Universe (for whatever reason)?