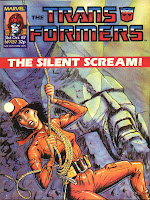 art 1 was written by Simon Furman, illustrated by Dan Reed, lettered by Annie Halfacree and newcoming colourist Euan Peters who went on to have a long relationship with the UK Transformers stories.

The cover is by Lee Sullivan and is quite a nice idea. It's unusual to see a human so prominently on a Transformers cover so it's unfortunate that she looks so awkward. I know comic books tend to portray an "idealised" view of anatomy but there's nothing ideal about Dr Hoffman here. Rather than athletically climbing a rope she looks like she's about to pass out from malnutrition and that's if her weirdly tight belt doesn't snap her in half first. Ultra Magnus "silent scream" is pretty well done, however, and rather evocative. It's just a shame the rest of the cover doesn't measure up.

We start on the slopes of a familiar looking mountain and are reunited with a familiar face. Dr Susan Hoffman, fresh from her clash with Megatron beneath the city of London is now investigating a new phenomenon - a volcano in Oregon, thought dormant, that has recently erupted. While there are metal fragments of unknown origin surrounding the site, I'm not convinced this really comes under the purview of archeaology, but it's nice to see the character wasn't a one off.

She descends intrepidly into the volcano and discovers, to her shock, that there are two giant robots trapped within the rock. Galvatron and Ultra Magnus, far from being destroyed by their tumble into the lava back in Vicious Circle! appear to be intact and merely frozen in place.

Meanwhile, Goldbug (who is still on the run from Grimlock's "justice" during this period of the comic), Rollbar, and Blaster are watching TV in a shop window while in their vehicle (and tape deck) forms. In a moment of cuteness that seems almost inevitable, Bumblebee is extremely taken with the story of Herbie.

Their enjoyment is cut short, however, when they see a news report about the volcano, fronted by Joy Meadows (Sludge's friend from Dinobot Hunt!). She is talking to Hoffman about the find and the Autobots are shocked to see the stricken, pained visage of Ultra Magnus, trapped within the volcano wall.

Elsewhere, Cindy Newell, Ultra Magnus' friend from the Burning Sky! storyline, dreams fitfully about that last fateful battle. She wakes from her fitful sleep to see the same news report, now hovering over the terrifying snarl of Galvatron!

In the Decepticons' island hideaway, Shockwave struggles to contain his composure at seeing at the news that the future Decepticon commander might still function. He immediately orders Soundwave to gather a squad of Decepticons and travel to the volcano, not to free Galvatron, but to destroy him 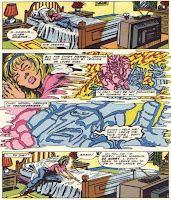 Back at the volcano, Joy Meadows and Susan Hoffman are talking about the broadcast and the military attention it has drawn when they see another woman being manhandled as she tries to get to the crater - Cindy.

Joy orders the soldiers to release Cindy and the newcomer explains that she has to help Ultra Magnus somehow. Before she can explain further an explosion goes off close by and the threatening helicopter form of Vortex appears in the sky.

The other Combaticons also charge and engage the US troops around the crater. It's a slaughter. The humans can make no headway against the Decepticons at all.

After the army withdraws, the Combaticons are discussing their task to destroy Galvatron. Goldbug and Rollbar are listening in, concealed behind a boulder. They decide that this is one victory they can give the Decepticons and decide to leave, before a tiny determined figure appears and begs to differ.

Cindy is angry that they have decided to abandon Ultra Magnus to his fate in the interests of finishing off Galvatron. Goldbug points out that if Galvatron lives, Magnus' sacrifice would be in vain, but Cindy won't hear of it. While the Autobots retreat she determines to stay, assuring Goldbug that it isn't over yet! 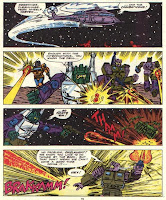 Those who know Furman's later work might recall that he sometimes betrays a slightly awkward relationship with gender politics on these Transformers books but most of that will actually come later and be connected to the idea of female transformers, rather than humans. However, the Ladies Night! title of this issue is a little unnecessary as it seems to say: "That's right boys, this one has girls in! Deal with it!"

That aside, these three characters are some of the more interesting supporting characters from Furman's Transformers UK stories and it really is great to see them all again, especially after Susan Hoffman just fell out of the Action Force story with no explanation. It should also be noted that all three women are strong, independent professionals: archaeologist, reporter, geologist, and have no romantic subplot that would necessitate them being female. This is a far cry from The Girl Who Loved Powerglide. Okay, one could argue that Sludge's relationship with Joy Meadows was based on her gender's traditional role as a caregiver, but that is hardly worth mentioning, given that she was also portrayed as an intrepid, monster-hunting reporter.

It is undoubtedly contrived to group these three characters together but the connections do at least make sense beyond the simple fact of their gender. Certainly there is more interest here for a regular reader than in creating a new set of characters for this story so I think trading believability for an emotional connection is a good choice, although not one that should be made too often.

e always a welcome addition to the story and I particularly like the idea that Galvatron is too much of a threat to Shockwave's authority to be allowed to live. Coupled with this is an unusually pragmatic approach from the Autobots. This is understandable as this particular group are on the run from their own side and cannot rely on getting any support against the Combaticons, let alone if Galvatron were to get loose. That said, it is surprising that Goldbug appears to be calling the shots at the crater as I might have expected to have seen something of Blaster's action-hero persona come to the fore as the Decepticons attacked.

Unfortunately Dan Reed seems to be in danger of becoming the next Will Simpson for this column as once again I find his art lets down an otherwise pretty good issue. The problem this time is not so much his style, which is generally serviceable, if out of the ordinary, but his sense of scale. Granted, Transformers and scale is not a subject that can be entered into lightly and the generally accepted response is to accept the inconsistencies and move on. However, this becomes increasingly difficult when you have images such as Swindle - a robot who turns into a jeep, picking up a jeep in one hand and shaking the humans out of it like bugs. Obviously the Marvel comic does include some size-changing (mass shifting if you want the generally ac

cepted fan term) when it comes to characters like Soundwave or Starscream but in general the more mundane vehicles have tended to transform into a vaguely plausible upright version of their size, give or take a little artistic licence. To ignore this, as Reed does, ups the giant stompy robot quotient, certainly, but takes away a good part of the appeal of Transformers - the seamless shifting between one mode and another.

It's great to see the comic revisiting some of it's human characters as well as the robots. The Marvel Transformers universe really begins to feel like it has a life of its own as the cast expands and characters develop. And that's without even considering the possible threat of a Galvatron revival if our heroines don't stop it! Definitely a recommended issue, with a review of Part 2 coming next week.
Posted by Bishbot at 10:43 AM

This story more than any other so far really shows up the mess of completing the earlier Galvatron saga in the annual. Ladies' Night was printed a couple of months before Christmas so a significant portion of the readership would not yet have been given a copy of the annual, to say nothing of those who never had one. Whereas with Grudge Match you can understand the story without having read the prequel, here you pretty much need to have read the annual already for the flow of the story.

Did Furman ever actually get a grip on Budiansky's take on Blaster? In Blaster's UK appearances he's pretty much a generic sub-commander lacking his more Batmanesque leanings.

One surprise is that this story directly ties into the Throttlebots/Combaticons conflict coming up in Used Autobots in the US strips - a rare case at this stage of a UK story slotting directly into US events, rather than the by now more normal practice of focusing on background or unused characters instead.

Except that in the UK story the Throttlebots have got guns from somewhere (though Ratbat didn't give them any in the Scraplets story), which they've clearly lost again by the time Vortex starts chasing them in 'Used Autobots'.

That’s a good point about the Throttlebots’ guns. If you wanted to explain it away, you could say that the Autobots made facsimile weapons from the surrounding military debris (they only threatened the Combaticons with them, and never actually fired them). Once they had escaped, the Decepticons realise their mistake, and give chase.

I thought this was a really neat tie-in between the UK/US plotlines (reading only the US comics, it seems as if Vortex just found the Throttlebots by chance – not impossible, but not satisfactory). Until much later in the series, the additional stories usually added to the universe, rather than setting up continuity clashes.

again art was my biggest gripe here, other than that it was ok. I never picked up on the tie-in to the US issues as I wasn't collecting the series in order at this point - I took a break from the UK magazine and was forced to trawl through back issue boxes for most of the 1985-1987 issues.