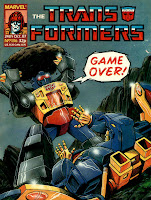 th provided the cover, which depicts a moment from the story where Grimlock nearly brains Divebomb with a boulder. It gets the job done but isn't an especially inspiring image. Grimlock is rather squat and rounded. I understand this is for perspective purposes, so we can have a dramatic angle, but I think Smith takes it too far. Divebomb, what we can see of him, seems nicely detailed however, even done to screws on the backs of his wings. Certainly not the worst cover but hardly memorable either.

Part 2 opens with Swoop being kicked around by the Predacons. They aren't really interested in killing him. They clearly have the upper hand so are just enjoying his anguish for now. Just as Razorclaw goes to to pick his sword up a massive metal foot comes down on it and he turns, in surprise, to see Grimlock's hulking dinosaur mode. The Dinobots have arrived!

Swoop is dismayed, knowing that if the battle goes on too long, the truth about his past with Divebomb will come out. Of course, Grimlock is only too happy to help his team-mate and the Dinobots go about their work with gusto.

Divebomb knows what Swoop is thinking and, smiling, taunts him with the possibility of revealing all. This goads Swoop into attacking him, restarting their battle and giving Divebomb the action he craves.

Grimlock, knocking Razorclaw about almost casually, mocks the Predacon leader and his team as Sludge, Slag and Snarl begin to get the better of their opponents.

Meanwhile, Swoop finds himself once again outclassed by Divebomb. Seeing Grimlock has bested Razorclaw he comes up with a plan. Choosing the angle carefully he dodges Divebomb's missile so that it strikes the ground near the Dinobot leader.

As Swoop correctly predicted, this enrages Grimlock who transforms to robot mode and cuts the low-flying Divebomb out of the air with his energo-sword. Swoop wants to be pleased that the Predacon is al 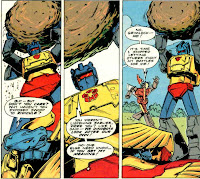 most certainly going to die and therefore won't be able to reveal his secret but part of him is overwhelmed by the guilt of once again getting someone else to fight his battles for him.

Divebomb tries to spare his own life by spilling the beans to Grimlock but the Dinobot leader is unmoved. He reveals that he has known Swoop's secret for months, as since taking over the Autobot leadership he has had access to all of Optimus Prime's unlogged reports. Divebomb doesn't understand why Grimlock hasn't confronted Swoop about his lies but Grimlock simply tells him that Dinobots look after their own and threatens to smash him with a boulder.

Swoop runs over and stops him at the last minute saying that it's time he stopped letting others fight his battles for him.

In the end, the Dinobots let the Predacons go, with Swoop determined to fight the battle on even terms next time. The Predacons are battered and cross, all except for Divebomb, who cannot contain his glee that his old rival, and playmate is back!

I wrote last time about the nostalgia I have for this story and to be fair I think the story itself holds up but there are a couple of issues with it: 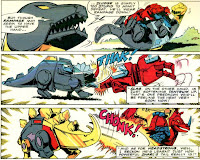 Primarily it's a very straightforward and well-written fleshing out of Swoop and his relationship both with Divebomb and the other Dinobots and on this basis I cannot recommend it highly enough. The twenty-two pages, the length of only one of the US issues, tell a clear arc with some decent action and solid character development.

On the other hand, there are some oddities that I find hard to ignore when it comes to the bigger picture. The biggest one is that Grimlock doesn't really feel like the character from the US comics. Which characterisation is preferable is certainly up for debate, in fact, I'd lean rather more towards Furman's version, but it is an inescapable fact that they do not read like the same individual, which is a problem in an ongoing comic, and, in all fairness, Budiansky got there first. It can perhaps be rationalised by suggesting that Grimlock is a good leader of the Dinobots but a terrible leader of the Autobots because he treats them like Dinobots who didn't make the grade, but there are still clashes when you compare their speech patterns and level of intellect.

Another somewhat questionable moment is the decision to let the Predacons go at the end of the issue. Thematically it makes sense but, much like observing their deprivations but not actually stopping them in Part 1 it seems like an odd move. If the Autobots are willing to do this sort of thing perhaps it's no wonder the war has gone on for so long. Then again, savage as they are, the Dinobots are perhaps the most willing group to do something like this over a matter of honour.
Another disappointment is that despite Divebomb's joy at the end of the story, this theme would never actually be revisited. That isn't a slight on this story, of course, but it feels like a shame, because the stage seems set for future conflicts between these two. Perhaps Furman couldn't make it work, or just found that he had too many balls in the air by the end of the comic.

Anderson's work continues to delight. He struggles a little to keep Grimlock's rather awkward dinosaur mode anatomically correct in the fight scenes but can be forgiven for that as almost no other artists can do it properly. The Dinobot leader just fundamentally lacks the articulation to fight properly and more modern versions of the character have tended to redesign this mode quite considerably to get over this problem. Other than that the whole issue is cri 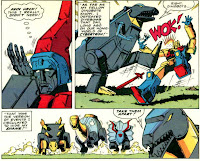 sp and high quality. Divebomb is a very good design, particularly the sunglasses look of his optics, and there are a number of good panels of him. Due to the frenetic production time it is actually quite unusual to see two consecutive issues by the same art team in this comic and the consistency definitely enhances this particular story.

(Interesting sidenote: the backup strip in these issues was still the ongoing saga of the Headmasters mini-series, ultimately a much more important story for the future of the book.)

Apologies for the lateness of this review. In an attempt to get back on schedule I will be reviewing another issue this Friday. Stand by for Ladies Night!
Posted by Bishbot at 1:30 PM

What was the difference in Grimlock's personality compared with Furman's work and someone else?