Apologies for the absence of this column in recent weeks. I spent ten days in Los Angeles for Botcon and had a lot to catch up with when I returned. I figure you'll all forgive me as it's Botcon...

sistence on publishing annuals means that the story of Galvatron and the Volcano was not, in fact, concluded in the weekly comic book but in the 1988 Annual (published August 1987). It's a shameless marketing tactic of course but also something of a British tradition - although August is an odd time - usually annuals are printed around Christmas time to give confused aunts and uncles something to buy for their young relations.

Anyway, this strange publishing tactic means that we can continue with the saga without deviating too much from the chronology of the main book, so without further ado:

Vicious Circle! picks up from the great cliffhanger from Transformers #120. It was written, of course, by Simon Furman, pencilled by Jeff Anderson and inked by Dave Harwood. This being an annual story rather than a regular book one meant that the credits are laid out differently and there are no credits for letterer or colourist, which is actually a shame, because I could pick out Anderson's artwork and Furman's writing anywhere, but both the lettering and colouring in this story are pretty different from the norm and it would be nice to know who was responsible.

As for the cover of the annual, I'm not sure who drew it, but I'm trying to find out. It seems like a promotional image I've seen a lot of variations of and... well.. look at it. I'm 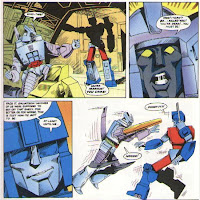 not going to waste my time and yours pointing out all the ways it's just dreadful. It's not surprising the artist is anonymous.

Perhaps not unexpectedly Ultra Magnus turns out to have survived his plunge into the volcano crater by clinging onto a narrow ledge and is now recapping the story for those readers who have not read the previous parts while laboriously clambering up the rock wall (this being an annual there were probably a LOT of those readers). Goldbug is there to help him out. No explanation is given as to how he escaped Galvatron last issue. He gets Ultra Magnus (and the reader, again) up to speed and says that they have to try to stop Galvatron.

To Goldbug's shock Ultra Magnus sinks to his knees and wants no part of it. His endless battle with Galvatron has left him emotionally drained. It has become a "vicious circle" if you will. Goldbug is disgusted and goes off to face Galvatron alone, even though he has no chance.

Back at the power siphon, Galvatron is monologuing about the raw energy he is about to absorb when he is interrupted by the little yellow Autobot. Goldbug gets in a few good shots but is soon overcome. Just as Galvatron is about to deliver the coup de grace who should appear but... (no prizes for guessing)... Ultra Magnus!

Galvatron is furious, sure that he had managed to kill the Autobot, and leaps at him, leaving them both wrestling in a tangle of limbs. Too close for blasters, this hand to hand struggle goes on for a couple of pages before we cut away to see Goldbug discovering a dangerous looking rent in the side of the power siphon. He realises that an unlucky blaster shot has rendered the power siphon non-functional - the eruption will not be absorbed!

He rushes to warn Ultra Magnus who is still battling valiantly but Magnus orders him to get out of the way of the blast. He has seen an opportunity to break the circle. Magnus distracts Galvatron long enough for the eruption to explode around them. Ultra Magnus' last words are to claim victory.

Goldbug is left alone. There is no sign of either Magnus or Galvatron and the power siphon has collapsed into the crater, plugging it and preventing a more dangerous eruption. The day has been saved but the cost has been too high.

The story of Galvatron's second rampage around Earth has finally come to a conclusion and it was probably about the right time. This is an action-packed issue but there are few surprises here and a few too many coincidences. I have no problem, for example, with Ultra Magnus surviving his death plunge but it would not have hurt to have had a more inventive explanation - the fact that Galvatron did not watch his hated enemy's demise does not really ring true.

Similarly, while Galvatron letting Goldbug go because he was "beneath [his] notice" is totally in character it does feel rather cheap after the great cliffhanger of the last part.

Lastly, I am not sure that I like the idea that the power siphon is destroyed by collateral damage. This feels like something of a cop-out after all the failed strategising of the last few issues.

The meat of the story, however - Ultra Magnus facing Galvatron - is very well done. You really feel for the determined Autobot and I love his smile when he tells the Decepticon that "Neither of [them] were supposed to get off that easily." It's hard to tell if it's calm acceptance or if Magnus has realised he needs to go a little crazy to fight back but both are equally valid interpretations, and the truth would probably be somewhere in the middle.

His initial refusal to fight is a little less successful though as it shows up the limitations of such a small page-count per issue. After factoring in all the recaps and a one-page establishing splash there are only eight pages of story, so Magnus' turnaround happens artificially quickly, despite having great dramatic potential.

Galvatron is the same as ever: an insane, power-crazy force of nature. This is not a bad thing, as he is a very effective enemy for our heroes, but I have to admit I won't be sorry to go back to a world where the Decepticons have as much characterisation as the Autobots. 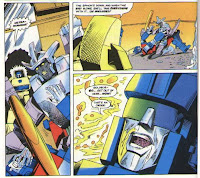 art is as good as ever (just look at the unnecessary, but very cool, mechanical detail in Magnus's mouth there) but as I previously mentioned the colouring is rather off. Everything seems a little pale and shaded much differently to normal. Goldbug's head should also not be blue (although www.tfwiki.net informs me that the Titan reprint colour-corrected this).

Ultimately, then, a good conclusion to a good arc. As a sequel to Target:2006 it is not quite on the same level but it is probably still the second best arc the UK comic has produced up to this point. I would go as far as to say that the whole saga is pretty much obligatory reading for any fan of the Marvel Transformers comics and you should do your level best to pick it up if you can. Need more convincing? It introduced the world to Death's Head and showed us more of the horrible situation in one possible future. Can you really ask for any more?

Next week - more Annual stories, probably.
Posted by Bishbot at 10:32 AM

Wouldn't a blue Goldbug head technically be more accurate? At least to the toy?

It was a good story, but I've been trying to work out why it felt a bit anticlimactic for me. Possibly the sudden removal of all the future robots – especially Death's Head – after so much build-up and not really achieving much.

For me, this tale was more about the ongoing struggle with Ultra Magnus and Galvatron and finding resolution (albeit temporary). It might have worked better if the story had begun with 'Burning Sky' (#115-116), and then back-tracked (it is time-travel, after all) to introduce the future mechanoids (#113-114) as complications to the Magnus-Galvatron clash. By starting with Death's Head and Rodimus Prime, there is an expectation that theirs is the main arc, and it really isn't. Prime is more of a spectator and Deaths' Head is a (very good) subplot.

Maybe that was why it couldn't recapture the magic of Target: 2006 – this whole plot seemed more linear and was the weaker for it. Each event happened one after the other and all came together in the end (rather than, say, Death's Head looking at a wanted poster on one page, Magus fighting Galvatron in the next). Still, Target: 2006 is a tough yardstick, and it was an enjoyable story for all that.

Thanks Nytetrayn:
Yeah the blue head is toy-accurate but we've had several comic issues with the gold head and that's how he was always coloured in the cartoon - no reason to change that at this late stage.

Chuffer:
Your thoughts mirror mine fairly well - I've got no problem with Magnus' personal story with Galvatron but because Furman introduced all the other elements, future Autobots, and Death's Head and then whisked them away, when read weekly the story manages to feel simultaneously rather slight and rather padded.

One proviso though - this is a VERY quick read when all collected in one volume and really shows its merits when experienced that way.

The cover made me chuckle at least.

@Chuffer: The Future autobots versus Galvatron, occupying 4 issues, seems abit anticlimatic, but this seems kinda the trend with Furman stories.

In Legacy of Unicron, the Chaos Bringer was more or less defeated from the start- the moment Wreck-Gar popped explosives under him. all the other subplots of Roddy and DH are kinda unneccesary- they don't achieve much and again, Wreck-Gar had already won- he could havenjust waltzed out and Unicron would blow up in a few hours utterly oblivious to his fate. DH and the autobots only served to allow 'cron to bury Wreck-Gar under rocks and complicate his plan.

Even in Target 2006, Galvy was doomed from the start- once the future autobots popped in and instructed Magnus, his planned would have failed. So in some ways Megatron and the present day Autobots were not really neccesary.

So Wanted Galvatron isn't really the only one to utlise this form of storytelling. Just my $0.02.

Regarding the publication time, Christmas has been starting rather early in the shops for quite some years now and a lot of annuals would come out around August so they'd be on shelves for a good while, allowing more time for children to see them and tell relatives they wanted them. (I remember quite a few Christmas gifts being brought for me in October or even late August.)

That said it was a rather sneakey move for the comic to do this. Even if someone brought the annual when it immediately came out they had to wait seven weeks to see the resolution of the storyline - quite a wait for those used to cliffhangers being resolved the next week. If they didn't get it until Christmas it would be a twenty-five weeks wait! (And in the meantime some of the weekly comic stories would assume the annual had already been read...) Plus the annual cost c£3.75 when the regular comic was only 32p whilst not every child would necessarily be given one or be able to find a copy off their own back (of the later annuals I recall only seeing the 1990/1 annual on sale once at the time and *never* saw the 1991/2 annual until many years later). All in all it was a dubious decision to run essential stories here and you can see why they cut back to the equivalent of soap bubble videos the following year.

(The other mess in all this is that issue #121 of the regular comic started reprinting "Mechanical Difficulties!" featuring Goldbug and rather giving the game away that he had survived.)

The cover art for the annual is almost certainly by Robin Smith. He did some stellar work for 2000AD around this time, but his Transformers work always left me a bit cold.