The Ark Addendum - Desertion of the Dinobots (part 1) 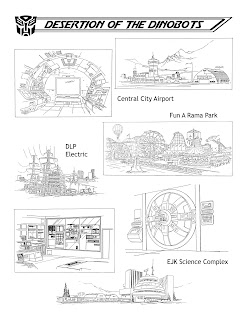 Well, look at that.  It's coming up on time for another Ark Addendum.  We did some Japanese material last week, so I figured I'd bounce back to Sunbow.  This week, it's Desertion of the Dinobots, Part 1.

Usually on multipart episodes I just mix up the models, as they tend to be pretty similar thematically.  Not this time though, no.  Part one gives us a nice variety of Earthen backgrounds.  We start out at the EJK Science Complex - I love the vault there.  When the Decepticon attack on that is foiled, Spike relaxes at the Fun A Rama amusement park before heading to the Central City Airport to pick up his dad.  Finally, after the Decepticon base there is rooted out, they go to recharge at the DLP Electric plant.  One thing that's interesting to me is how each of the places they visit has a name, at least on the model sheet.  I wonder what that's about.

Next week, I'll bring you Desertion of the Dinobots, Part 2, where it's all Cybertron, all the time.
Posted by Jimtron at 12:07 AM

If the places are mentioned in the script (with names that is) then it might just be for easy labeling/collating? I mean they had to have a ton of pre-production art so it only makes sense they'd want to be able to easily page through it. It's a thought anyway.

I'm still wondering whereabouts this Central City is, also it's never stated what the purpose of Sparkplug's traveling was for. I suppose you could argue he was looking to relocate since we don't really see him after season 2.

Oh I see, I didn't catch what you meant I guess. None of these make any sense:
http://en.wikipedia.org/wiki/DLP

so DLP Electric might stand for 3 people's last names? No idea.

I'm guessing someone in Mr. Kress's life, but that's just me.