The Ark Addendum - Desertion of the Dinobots (part 2) 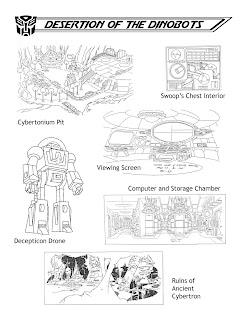 Last week, I uploaded the models I had from Desertion of the Dinobots, Part 1. This week, I finish out part two.

Part one gave us a nice survey of some Earthly structures.  This time, we had to Cybertron!  We'd previously seen the surface of Cybertron, in episodes like More than Meets the Eye and Divide and Conquer.  This time, we go much deeper, seeing some mining pits and computer screens.

Two models that almost made it into the books were an interior shot of Swoop's chest, which looks somewhat primitive to me, and a Decepticon Drone.  Not sure why he didn't make it in, probably just not enough room to squeeze him in.

Actually, this is one that I dearly wish I had the full model pack for.  We get to see some of the history of Ancient Cybertron, and get models to match.  There were also other type of drones employed by Shockwave, and I wish I had their model sheets too. Perhaps some day, I'll find it!  Till then, wish me luck, and I'll continue to seek.  (Also to strive, to find, and not to yield.)


On a semi-related note, one of my all-time favorite authors, Peter David, has asked a question on his blog that I think is worth repeating.  In a nutshell, Crazy 8 Press is going to be going live soon, with e-books as well as possibly print-on-demand.  It's a way for authors and readers to directly connect, and it's definitely worthy of support.

The question, though, is how much is an original novel of some 100K words by Peter David worth in this format.  The broader question, I suppose, is how much is an ebook worth as compared to a printed edition.  Feel free to chime in here, or to head over to his blog to weigh in.
Posted by Jimtron at 9:55 AM

Kudos for these. The model-sheets definitely match the quality of the episodes arc. So very many incidental characters in these episodes (especially the history lesson) that I'd gladly give my right arm to see in sheet form.

I love the way ancient Cybertron looks in this episode. I wonder if there are also models for the cities in their "prime"... the flashbacks of ancient Cybertron in the viewing chamber are some of my most favourite scenes in the TF cartoon period :)

Have you seen Trecathlus's Deviantart page? He has a whole gallery devoted to 'The Art of Cybertron' which is basically screen-caps of Cybertron backgrounds. Considering the monumental (and epic) number, the man is nothing if not devoted. All 3.5 of the American seasons and the Movie are here.

I beileve this page has the 'History Lesson' backgrounds on it:

There's an interesting point Trecathlus makes about the ruins of ancient Cybertron, btw.
I simply figured that where Spike, Carly and Swoop end up is the sun-turned side of Cybertron (hence the red skies), and in the viewing chamber we get to see those cities as they used to be. Trecathlus makes the point that the group was already deep underground at that point, and that those ruins would be an "older layer" of Cybertron (pretty much like ruins of ancient Rome still forming the foundations for present-day Rome, or streets from Victorian-era London still being found underground). Thus, the cities seen in the viewing chamber are, in fact, underground these days. The coloring is off (the animators still show the red sky above the ruins), but that is indeed what the script would seem to imply, I guess.

Does anyone have more info on this? And what do you guys think?

Metrodome's (Region 2) Season 2 Part 2 has the original script dialogue for the episodes. Earl Kress is interviewed in the Season 2 Part 1 DVD set from Rihno and he discusses some background of the episode and of Cybertron.

Other then that the only people who may have any more information are those directly associated with making the episodes. Also this is assuming they even remember anything else since this was 1984 or 1985... so educated guesses and observations like the ones you and Trecathlus have made are just as likely to be right.

I think the idea that the older cities are layered beneath present day Cybertron makes allot of sense. It could very well have been a conscious consideration in the design.

I agree, the original Cybertron design is very unique, in the sense that it makes clear the entire planet is "hollow", made up of many layers. After all, in the big "central shaft" you can see right through it, almost to it's core (where Vector Sigma would be).
It would be logical to assume the deeper layers are also much older, I guess.

The coolest thing about the design, I think, is that although Cybertron is descibed as a "small planet" in the cartoon (unlike the Cybertron in the comics, which is Saturn-sized, or in the Michael Bay movies), it's "surface area" is much larger, as there are many surfaces within Cybertron. So although the planet may seem smaller, it's actually quite a bit larger than Earth because Earth only has "one level", where Cybertron has many, many more "levels" :)

The Decepticon Drone does appear in quite a lot of the episode, leading Shockwave's Sentinel robots, and has a few spoken lines (and, seemingly, more personality than we'd expect from a drone). He's melted down by the Dinobots towards the end of the episode. His model is later used for the Sentinels in The Revenge of Bruticus.