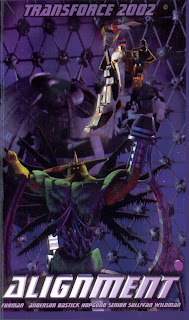 Well, I wasn't planning on doing this, but the feedback seemed pretty clear that it was desired.  This will be the review of Simon Furman's novella, Alignment, produced for two Transforce conventions unofficially.  It tells the story of the Liege Maximo, and also bridges the gap between the Marvel Comics continuity and the Beast Wars series.  After keeping it off-line for years, the convention organizers eventually decided to share an on-line version, which is available for download here making it by far the easiest of all my comic reviews for you to follow.  I'm going to be reviewing the 2002 printed edition, though, which features a different cover.

Alignment was written by Simon Furman, with artwork interspersed between by Jeff Anderson, Kev Hopgood, Geoff Senior, Lew Stringer, Lee Sullivan, and Andrew Wildman.  The cover of the 2002 print edition is a piece by Sean Bastick.  (The cover of the on-line edition is by Lee Sullivan, and is reproduced in black & white in the back of the print edition.  It was originally used in the magazine edition that covered part one of the story.)

The print cover by Bastick is a CG piece, featuring an attack by Grimlock on the Liege Maximo.  It's just a bit flat, a bit too regular.  The web of planets that make up the Hub seem to be merely a large room.  Obviously scales such as expressed in the book are hard to convey visually, so I might be inclined to give that a pass.  However, there is a sort of regularity to the image that is unappealing.  The Liege Maximo's cannon, for instance, looks like a tool you'd buy at Sears rather than a weapon that seemed to be powered by a 'small sun.'  Note that I actually am a fan of Bastick's work, but in this particular piece he falls short of the mark.  (The other cover, Sullivan's Optimus versus Megatron, is much stronger as a visual, though thematically a bit odd to focus on a one-sentence line of backstory.)

The book itself is broken into two parts.  In part 1, a critical but horribly dull expedition by Grimlock, Swoop, Blaster, Springer, and Perceptor to hunt for energon accidentally uncovers a massive threat to the existence of Autobot and Decepticon alike, a mind-shatteringly gargantuan web of little Cybertrons linked together into a galaxy-spanning Hub.  At the center of this web sits the Liege Maximo, who is preparing for a once-in-the-lifetime-of-the-universe Alignment of certain stars that will allow him to become a god.  As this event is happening quite soon, he unleashes massive forces against Grimlock & co, then sends about a quarter of his forces each against the Autobot and Decepticon camps.  Their ship is destroyed, but they've managed to find some measure of safety by abandoning it and hiding in the Hub.

The Autobots are licking their wounds after their last massive battle with the Decepticons.  The Autobots emerged on top, but are critically low on energon and are considering severe options such as downsizing.  The Decepticons are holed up in their fortress, desperately attempting to formulate a new strategy.  The Autobots get a bit of warning about what is coming in the form of a log from Grimlock, but the Decepticons have nothing and are soon being razed to the ground of New Cybertron.  They have a slender strand of hope, though, in the form of Soundwave's machinations.  He and a cadre of misfits and loyalists have resurrected Megatron!

Thus ends book one.  I hate the idea of coincidence, and here we get two.  Not only does Grimlock just stumble upon the bad guys, but he does it practically on the eve of the Liege Maximo's ascendance.  I might forgive the first one.  Grimlock intentionally plots a search trajectory through realms of space rumored to harbor monsters and devils, and he finds them.  But the timing of it all seems lazy. 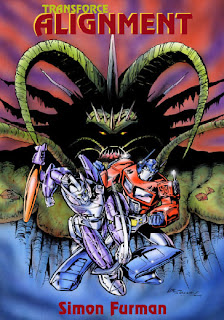 What is of more interest to me is the casual backstory hinted at in the book.  It's a technique that Roche and Roberts would later expand upon to great effect in the superb Last Stand of the Wreckers.  A list of epic threats not quite as big as Unicron includes Jhiaxus, the Swarm, Mogahn the Mass, Praetorian, the Ebon Knights, and Pinea Omicron, the site of the final confrontation between Optimus Prime and Galvatron II.  We also get a bunch of new Decepticon high-commanders name-checked, guys like Direwolf and Mantissa, Saberjaw and Mindgame.  I also like that Furman has given Cybertron's solar system a name, and that New Cybertron has a prior name (Pyrovar.)  These sort of universe-building details are very appealing to me.

The big ending of the book, the return of Megatron, felt a bit overdone.  How many times can Optimus and Megatron come back, I wonder? It's the sort of thing that, in theory, SHOULD make a good climax, but in practice it feels like we're retreading over well-worn ground.

Part II features three plot threads that converge.  Ultra Magnus lures the Liege Maximo's forces close to Cybertron with an energy field, then sets off an ambush from the asteroid belt that destroys them all.  Megatron, meanwhile, fakes a desperate last stand on New Cybertron and blows it up, annihilating most of the fleet set against him.  And Grimlock's band tries and fails to blow up a substantial portion of the Hub by messing with a critical energy juncture, J654.  It would destroy 0.5643 percent of the Hub, leaving a hole 'the size of a small galaxy.'  Guh, really?  Half a percent of the Hub is a small galaxy?  Maybe he meant 56% instead.  The scales are hard to imagine, and I think Furman had some difficulty with it himself. 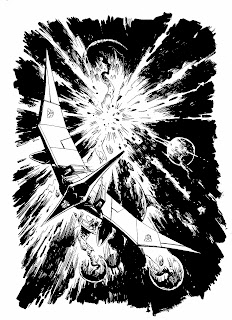 The Autobots and Decepticons, victorious, launch what fleets they have at the Hub and manage to do some damage.  Meanwhile, Grimlock engages the Liege Maximo head-on and actually distracts him for a moment before being blown away.  This points to the other guerrilla fighters a strategy, cause any distraction they can.  With all Autobot and Decepticon ships coordinating for a moment, Megatron manages to engage the Liege Maximo's physical body and win.  Swoop, meanwhile, completes the original mission and blows up J654, destroying the Alignment and all that remains of their foe.

This latest burst of cooperation heralds the rise of the Predacons, downsizing, and hope for enduring peace.  "With hindsight, they really should have known better."  Cute.  Oh, and three pages later, "It never ends..."

Chapter two is definitely the stronger of the two chapters.  The desperate cunning of Ultra Magnus and Megatron seem to be about right.  Grimlock's long trek to J654 is described as boring and desolate, which brought to mind to me the journey of Samwise and Frodo.  Perhaps he was going for that, though he didn't really have the space to summon those kinds of emotions.  Swoop gets to be the hero, which was a bit surprising.  I suppose Furman was setting him up as The Veteran, who he would eventually evolve into. There is a sort of weird symmetry to Swoop's future name change, since as Bish covered yesterday he used to be called Divebomb.  How odd that Swoop would become a lens through which Furman would view the entirety of his run on the Marvel US / Marvel UK / Beast Wars / Transforce / 3H BotCon continuity. 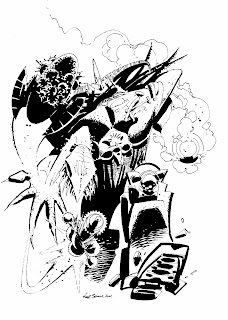 The artwork was decidedly mixed, though that final image of Swoop by Jeff Anderson is absolutely lovely.  The Wildman piece I posted above is decent, and Senior does a lovely Liege Maximo that is indeed the stuff of nightmares and legends.  Many of the other pieces, though, fail to elicit much of an emotional response.  The prose, though, is consistently fresh and easy to read.  Furman invokes some nice imagery from time to time, especially when he gets more technologically inclined.

How does the book work, as a story on its own?  Not wonderfully, I'm forced to admit.  It's not nearly as strong a conclusion as the final issue of G2 is, or even the last issue of G1.  It seems large for the sake of being large, but doesn't go deep enough into any one character to make you really care.  It's more like the outline of a six-issue comic series than like a novella.  What it does do very well, thanks to things like Sparks and downsizing, is to be an effective bridge between the G2 comics and the Beast Wars. As such, it isn't so necessary for it to be a massive climax itself.  Furman had already written that, and Bob Skir had added a new finale on top of that for Beast Machines.

So, final verdict: worth reading, if only for the expanded universe building, but you'll be better off picking an earlier or later climax for the continuity depending on where you want to draw the line.  Interesting to see the ideas, but not emotionally satisfying.

Next week (or so), I'll review some of the ways that this continuity has been reprinted.  Then, one more big-picture post, and I'll turn the comic review space over to a new feature.  I won't say what it is, but I think you'll enjoy it, yes?
Posted by Jimtron at 9:26 AM

Email ThisBlogThis!Share to TwitterShare to FacebookShare to Pinterest
Labels: review, US Marvel Review

Hey thanks, Jim. :) I always enjoy your reviews, learning all the little analytical stuff I probably missed on my own, and I'm glad you included Alignment. Hadn't read it in a couple years and the details were foggy, but I remember the strange blank feeling I had after finishing it. I attributed it to the change in medium, but maybe I subconsciously didn't want to believe it wasn't very good. Ha. Maybe if I give it another read that'll be clearer now.

I remember when I first picked up Alignment (the novella version). It was at OTFCC 2003 (I believe). Having a dealer table that year, I was able to sift through some things a bit earlier than most people and went through my usual rounds of looking for UK issues to complete my full run collection when I came across the Alignment book. Suddenly, a hand fell upon my shoulder from behind and a british voice declared to me, "Ah... the Holy Grail." It was Furman himself and he was more than happy to share a few minutes to talk. I had been looking for 'Alignment' for a couple years, wanting dearly to read Furman's ideas on how he decided to tie up loose ends in G2 (probably my favourite fiction of Transformers). I can say that upon first reading it, I recall being clearly satisfied with the fiction and even further elated when I grasped the concepts that would bridge the untold gap between G2 and Beast Wars (regardless of the inherent discontinuities between the two, the ideas were there and I found them to be exciting). Years later, I decided to pick up the book again and re-read it. Unlike many fans, I still think that it holds up quite nicely. There's some obvious flubs here and there, but there was that to be taken with a general suspension of disbelief in any of the Transformers fiction I've ever come across. The unique description of Perceptor's death has always haunted me and still serves to remind me of how cleverly Furman can craft his descriptions if he sets his mind to it; a comic panel could never have done such a scene justice and his wording to describe such an awkward scene is proof that the man can be the master of his craft. I know a lot of people dislike Alignment (probably because a lot of people disliked G2), but to this day I still enjoy it and think that it did its job of completing the G2 story quite nicely. But obviously, this could be just me.