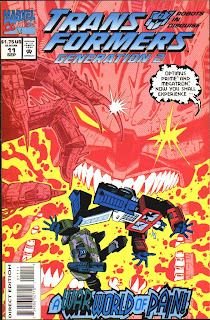 We're almost done!  The penultimate issue of the US G2 Marvel Comics run of transformers was, once again, split into two parts.  The creative line-up is unchanged.  Both stories are penned by Furman, lettered by Starkings (w/ Comicraft), and colored by Mossoff.  The main story, Dark Shadows!, is drawn by Manny Galan and inked by Jim Amash.  Tales of Earth, part 8, the final in the series, is drawn by Geoff Senior.   They played with their titles (writerbot, inkerbot, etc), with editors Tokar and DeFalco listed as busybot and deactivated.  Oh, and the cover, as every, is a Yaniger piece.

Yaniger's piece is a striking image, with a gigantic Starscream veiled in red willing cackling yellow energy into Optimus Prime and Megatron.  The actual rendering is fairly simple, except for a beautifully rendered oversized hand.  To me it's the color that really sells the image.  Slightly marring it is some dialogue, "Optimus Prime (tm) and Megatron (tm), now you shall experience --" "A WARWORLD of PAIN!"  I don't think it adds much, and it's repeated almost verbatim inside.

And inside we go, picking up exactly where last issue left off.  Starscream's gloating conveys some nice exposition, tormenting Op & Meg with words before he gets down to it with action even as he directs the warworld against Jhiaxus' forces.  On Earth (but not Tales of Earth yet), Jhiaxus is disbelieving when informed that the Warworld has gone rogue.  It doesn't take him long to figure out that Starscream is to blame.  Furious, he rockets up to the Twilight, leaving a concerned subordinate calling The Hub (no, not Hasbro's new channel!) with urgent news for the Liege Maximo.  Hmmm... heard that name before. It feels like Jhiaxus is approaching his character's apex.  While Optimus and Megatron seem to have grown, the leader of the G2 Decepticons is regressing back to the state he was in back in ancient times.  It's fun to see this kind of convergence.

Op & Megatron face the interior of the Warworld, an ever-twisting maze of spikes and fusion energy and twisting metal.  They're quite a force when fighting together, but Starscream seems to be more than a match.  However, occasionally the environment seems to alter to their favor, such as a corridor that brings Optimus where he needs to go, or a cable that's lower than it seems.  Hmmm....   The pounding that the Cybertronian Empire is dishing out provides a welcome distraction.  Optimus contacts Jhiaxus from the control room of the ship, attempting to convince him that an even GREATER threat is nearly upon them.  Jhiaxus hears these words, and decides to blow up a large piece of the Earth!


It's a pretty straightforward tale, a moody piece mostly focused around the Warworld.  Optimus, even at this late point in the game, seeks rapprochement.  Jhiaxus, having devolved into a tyrant worse than the likes of Straxus, has no place for it.  It's ironic that Optimus and Megatron are able to work so well together this issue, and yet they are the ones he considers to be evolutionary throwbacks.  Starscream remains the big unkown, with his matrix-infused Warworld.  I find it funny that, in a way, his ambition is so much greater than Jhiaxus' or Megatrons'.  They seek to mold the galaxy to their liking, Starscream seeks godhood. 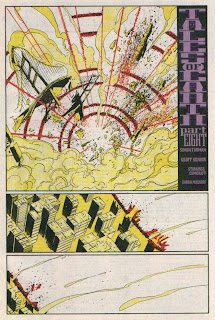 We're not done yet!  Senior seems to take a sadistic artistic glee in depicting the destruction of San Fransisco, matched by some pleasantly contrasting text from Furman.  "Clear skies, with a cool breeze rolling in across the bay to keep temperatures in the balmy mid-seventies.  It's hard not to smile at total strangers."

Optimus is besides himself.  The guilt is clearly overbearing.  Grimlock and Razorclaw are awed by a mushroom cloud topping the horizon.  The end seems nigh.  Jhiaxus is elated, ordering more strikes even though, as an underling points out, some of his own troops are down there.

But salvation comes from an unexpected quarter... Starscream engages the Twilight.  Optimus questions the conniving 'Con's actions, but Starscream has no explanation.  Prime does, figuring out that the Matrix, ever willful, is rewriting Starscream into a suitable host.  This is not the dark energy that possessed Thunderwing, no, this is the Matrix purified and noble and good.  For a moment, there is hope.

And just like that, it is gone.  The Twilight and the Warworld together are engaged by the Swarm, and we are all set for the final confrontation of the Marvel Comics Transformers continuity.

Despite the final Tales of Earth (which only half takes place on Earth) being much shorter than the main story, it seems much meatier somehow.  While there's plenty of Indiana Jones style action in Dark Shadows!, Tales of Earth is all payoff.  The destruction of San Fransisco is a level of devastation never before seen in the Transformers, and I struggle to think of a comparable example since.  I mean, sure, Unicron has destroyed some worlds, I'll grant, but this is Earth!  This is HOME!  I've been to San Fransisco.  Destroying it takes balls.  This in and of itself would be enough to make this a stand-out issue, but Furman throws two more curve balls thrown at us in rapid succession.  Starscream, becoming good!  And then the arrival of the Swarm, which had of course been telegraphed way in advance, still manages to catch my by surprise thanks to the many metaphoric blows Furman rained upon my head.

After reading this issue, I feel certain that the final issue will be larger than life and probably far better structured.  The elements seem to be gathering together, and I want to see how the tapestry is woven together.  Dark Shadows! and Tales of Earth (part 8) are available for purchase in the Transformers Rage in Heaven book, published by Titan, and they come highly recommended by this not-so-humble Transformers scribe.
Posted by Jimtron at 4:21 PM