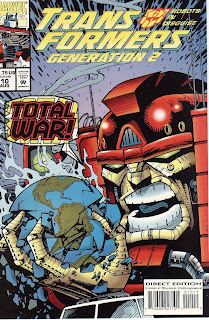 The tenth issue of the US G2 Marvel Comics run of Transformers. [Note, I'm being only slightly redundant when I write out all of that.  There is in fact a UK G2 series (by Fleetway) as well as a US G2 comic not done by Marvel (done instead by Fun Publications as a part of last years BotCon... see how I worked BotCon in?).  I suppose I could have dropped the country and just gone with publisher, since there is no UK G2 Marvel Comics by this point, but in the interests of uniformity with my G1 reviews I figured I'd keep it.] It is told in two parts, though they mesh somewhat seamlessly.  Both are written by Simon Furman, colored by Sarra Mossof, and lettered by Richard Starkings with Comicraft.  Pencils on the main story, Total War!, is by Manny Galan with Jim Amash on inks.  The incomparable Goeff Senior returns for Tales of Earth.  The cover is all that Derek Yaniger contributed to this issue.

Perhaps it is enough.  We get a symbolic cover this time, with a giant Jhiaxus crushing the Earth like a cheap ceramics.  TOTAL WAR! it boldly proclaims.  It's simple but very effective.  Our heroes have run out of places to hide, and all of Earth will suffer for it.  It certainly makes me want to keep reading. 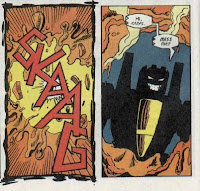 Inside, we start exactly where we left off, with incoming forces buffeting the Autobase.  I find the narration rather forced.  "Autobase Earth.  A safe haven, far from the eyes and reach of Commander Jhiaxus and his second generation Transformer army.  NOT!"  Ugh.  Trying too hard, you are, Furman.  At first things seem bleak, with constant firepower knocking Megatron and Optimus off balance and killing Joyride.   Up above on the Warworld, things are faring no better.  System after system is knocked off-line, and a boarding party is forcing their way in.  The Combatacons move to repel, but it's worse than they thought.  Starscream is leading the way.  Great artwork here, especially on Starscream.  It's almost Sin City-esque.   Furman also writes desperation well.  This is starting to look like a last stand.

However, when we flash back to Earth, our heroes are already rallying.  We get three pages of a counteroffensive that seems pretty darned effective.  Furman hangs a lampshade on this a bit, with Jhiaxus incredulous at how badly his forces are doing.  Frankly, so am I.  Hard to imagine the hundred or so G1 Transformers, backed into a corner and still managing to win.  Jhiaxus does the sensible thing, though, and summons EVERYONE to Earth.  One way or another, the fight ends here. 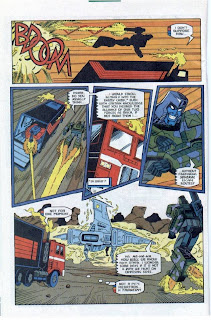 It's space, though, where the interesting things are happening.  Soundwave and the crew of the Warworld have abandoned ship, leaving it in the hands of the G2 forces... and Starscream.  The G2 forces eagerly pursue the escape craft, leaving Starscream unattended.  He quickly makes his way to the Matrix, still wired into the ship.  This can't be good.  Starscream isn't the only G1 Transformer making his way to the Matrix, though.  Optimus presses Megatron, and the latter admits that he has a cloaked ship nearby.  Up they go, though who or what will greet them is yet to be determined.  I rather like the idea that Megatron would NEVER walk into the Autobase without several means of escape nearby, and further that Optimus would know that.  It feels right.  That the G2 Decepticons would leave Starscream alone in such a pivotal position seems less likely, but I can accept it during the fog of war. And hey, it looks like Roller makes an appearance, amped up for G2 of course.  I like the top panel on this page as well, what with the urgency of Optimus and th casual backwards blast that Megatron uses to shrug off pursuers.

This story isn't quite over.  A battalion of G2 Cybertronians, en route to Earth, encounter a mysterious force.  It is, of course, the swarm, and it rips them to shreds in short order.  However, the order logged in their systems, make haste to Earth, enters what passes for consciousness in the Swarm, inexorably setting up the REAL climax of the series.

Of course, while Total War! is over, Tales from Earth (part 7) have just begun.  Starscream, apparently in complete control of the Warworld, savors the confusion on the part of Jhiaxus' forces as he refuses to answer hails.  Eventually, he gives them an answer... guns blazing, of course.  Artwork, by Geoff Senior, is of course amazingly lovely.  Starscream's sadism is a delight.  He goes from craven coward to brutal bringer of death at the drop of a hat.  After hurling the gauntlet at Jhiaxus, he waits patiently as Optimus and Megatron come aboard. The Autobot and Decepticon leaders are, understandably, nervous.  They aren't being fired upon, but neither are their hails being answered.  SOMETHING is certainly afoot. 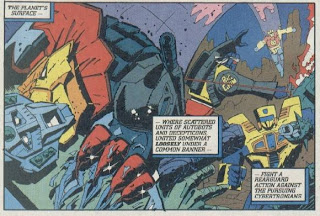 There's a bit of a subplot down on Earth.  (Imagine that, in a story called 'Tales of Earth')
Megatron's latter-generation Transformers, given life between issues 6 and 7, are playing a part in the seemingly neverending battle.  Some of them, Manta Ray in particular, seems to be getting on quite well with Grimlock.  Razorclaw doesn't take too kindly to this.  There's a great full-panel of his face as his stews on this, but I decided to instead go with him ripping the throat oout of a G2 Cybertronian.  He's looking damn scary!  We also see Grimlock in headband, with 'Big Grim' written on his shoulder.  Why?  I have no idea.  This feels like a set-up for some later plotlines, nice to see in a book so close to the end of its run. 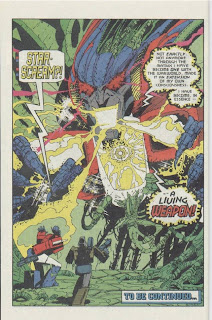 Inside the Warworld, the environment seems bizarre, unfamiliar.  Corridors twist and turn almost organically, with crackling energy everywhere.  The wall twists and turns and swallows them whole, depositing them in the realms of nightmares.  Starscream, with the Matrix, seems to have merged with the ship!  He's huge and glowing, an immense creature blurring matter and energy.  It's actually quite familiar - Issue #50 of the G1 run, Dark Star, featured the same image more-or-less.  It's still rather effective.  We now have three major plot points to resolve, and only two issues to do it in.  Starscream and the Matrix; Jhiaxus and his forces; and, of course, the Swarm.  One can't help but wonder how these three antagonists will interact in the short time left to us.

As for the specifics of THIS plot point, I'm a bit ambivalent.  After all, we HAVE seen Starscream overclock himself on mystical energy sources before, so that doesn't feel very new.  His treachery did feel like it needed a climax, but then that could have been his team-up with Jhiaxus and not this additional outrage.  This marks yet another Starscream-based cliffhanger.  I'm starting to feel like the latter half of G2 has a bit too many of them.

Ending aside, it's a strong issue.  Geoff Senior artwork is very welcome, though actually the Starscream-Warworld material would have been perfect for José Delbo.  I feel like I can almost, but not quite, see where the finale will go, which is a good thing.  Furman is playing fair but not over-telegraphing anything.    While I do think it a bit silly that the Autobot/Decepticon alliance was able to shrug off Jhiaxus' initial assault, I'm willing to accept that for the sake of the story.

Only two issues left!  Total War! and Tales of Earth (part 7) are available for purchase in  Transformers Rage in Heaven  book, published by Titan.
Posted by Jimtron at 11:59 AM

During the "G1" era, I wasn't the biggest fan of Senior's art. This is the issue where I became a huge fan, especially the Warworld page shown here. Now I'm such a big fan I even have some of his original art from issue # 75 :)

yes, great to see Senior after Galan's horror efforts in the preceding pages. I think "big grim" (and the bandana!) is st another sign that Hasbro are off everybody's backs and they can play about a bit in a 2000AD style.

Also, I feel Mr Furman's "not" is a tip of the hat to Waynes World, which was HUGE when this comic was first published...

Senior's most impressive artowrk is still from his UK days, IMO.

I figured "Big Grim" was some sort of implementation of everyone in G2 having their names written on them in some form or fashion.

I remember reading this issue and feeling like I'd read it before. The "god" starscream, evil getting the Matrix, and the autobots and decepticons teaming up to face an "all consuming foe". It just felt like Furman rewrote all the major plots from the g1 comic from the Underbase saga, through Matrix quest and including the final show down with Unicron.

At least the artwork in this one was improved (for half the issue) but overall Yaniger's influence still dominated and infuriated me.