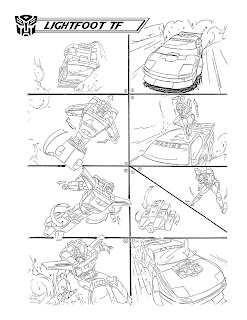 Hail and well met, loyal blogosphere!  It's time for another edition of The Ark Addendum.  Since I've been hitting the US cartoon for the past few weeks, I thought I'd bounce over to Japan for another nifty Transformation.  This week, it's Lightfoot!

Lightfoot, the Japanese version of Getaway, was one of the Godmasters of Masterforce.  Light Foot, son of Left Foot (get it?  To the Japanese, L and R sound the same, so... ugh) is the heir to the British Motor Company, which is naturally based in Canada.  When I was putting together The Ark II, Hydra helped me get as much funny trivia like this as possible to help contextualize all these guys.

As far as the image goes, it's pretty lovely.  As usual, more effort than strictly necessary seems to have been put into this purely internal document.  I do find it slightly awkward that the Godmaster controlling the Transtector winds up on his back, though.  Not a problem with the transform, a problem with the toy, but still something that bugs me a bit.
Posted by Jimtron at 11:48 AM