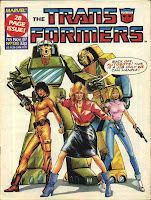 The cover, which is really striking, was by Barry Kitson. It doesn't really accurately represent what happens in the story, but it's hardly the first comic to sacrifice that in favour of an eye-catching image and this is very eye-catching to say the least. Both robots and humans are well-rendered and Joy, Cindy and Susan are actually attractive this time and posed in a great Charlie's Angels style homage, particularly around the haircuts (and automatic weaponry).

Swindle is in the middle of wiring up an explosive charge when he is shocked to discover a flaming jeep heading right for him! His attempt to dodge fails and he is left stunned when, to his horror, he sees a human-controlled tank driving towards him.

Before he can raise his own weapon the tank fires. He is hit in the torso by an explosive shell and goes down in flames (Senior's artwork makes this look really painful - especially if you're a man - I think this

might be a subtle reference to the "women fight back" theme).

It turns out that Joy Meadows has some experience in tank driving from a special she did on her news programme, so we'll go with that.

Cindy thanks the other two women for helping her when they had no reason to but Susan Hoffman explains that she could hardly turn down the find of the century - Ultra Magnus and Galvatron - still sealed within the crater. This prompts Cindy to recount what happened at the end of their battle which, since this year's annual which contained the story hadn't come out yet, must have been both really helpful and an incredibly lame way to find out to a reader in 1987.

Joy just uses the reason that she is a newswoman and this is good copy. This is slightl

y odd because her connection to the Dinobots was actually pretty strong and she built up a good relationship with them but perhaps Furman just couldn't more exposition into this fairly lean story.

Nearby, Soundwave finishes laying his charges. Onslaught asks him why they want to destroy a fellow Decepticon and Soundwave explains that Galvatron is too powerful and dangerous to be contained and would destroy all of their plans. He prepares to detonate the charges but Onslaught informs him that Swindle has not yet returned. He orders them to find their team mate and goes to guard the detonator.

A little way away the Autobots are worried. Blaster suggests that Goldbug goes to make sure the humans haven't got themselves into trouble. Goldbug is only too glad to go against his original decision as he agrees that they cannot leave the humans in danger and he hadn't liked leaving Ultra Magnus to die, despite it being the logical choice. At Goldbug's order, the Throttlebots roll out!

Onslaught and the Combaticons are puzzled by Swindle's unconscious condition. Their musings are interrupted when another driverless jeep comes hurtling towards them. Onslaught stops it easily before noticing that it is full of the explosives that Swindle had been laying! 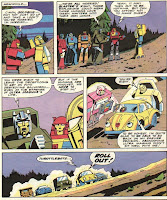 The Combaticons scatter but Joy Meadows is ready with her tank. She blasts the jeep and the explosion throws the Decepticons in all directions and wrecks the tank. Battered, she crawls out of the wreckage and finds Cindy, similarly shaken up. They remember that Susan was closer to the explosion and turn to look for her, only to find Onslaught still standing, the unconscious archaeologist clasped in one hand.

Joy makes a determined last stand with an assault rifle but Onslaught laughs it off until he hears a voice from off-panel and turns to see the Autobots with guns in hand. Realising he is beaten he transforms and drives off but not before swearing revenge on the Throttlebots (this theme would be continued in the Used Autobots originating in the US comic).

The Autobots are surprised that the Combaticons have all retreated before Goldbug realises that the volcano is still wired up as one huge bomb!

Elsewhere, Soundwave transforms into tapedeck mode and prepares to send the detonation signal. Unfortunately for him, Blaster has anticipated this and also sits in ghetto blaster mode, jamming the signal.

The Autobots disarm the charges and all is well. Goldbug is grateful for the humans' help but tells that they they shouldn't have got involved. He does say they've done prett 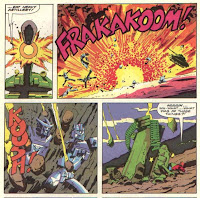 y well for mere... but is cut off before he can say "humans" by a furious Joy Meadows, who assumes he was going to say "women". Goldbug, predictably, is utterly confused by the ways of women. (just like all of us, am I right lads?). In all seriousness, this joke is pretty lame way to end a decent story and really dates the comic.

Luckily the real ending is much more interesting as we cut back inside the volcano to see that some of the rock has been shaken loose. Could Galvatron be escaping? But that, as the text informs us, is a story for another time.

Ladies' Night, while hardly essential, has been an entertaining dip into a slightly different kind of story. The innovative ways that the humans are able to hold their own with the Decepticons are a lot of fun, and believeable enough for a comic book world.
I could see there being a valid debate over whether the Autobots' riding to the rescue is a good ending or a cop-out but I am inclined towards the former. The Autobots are the stars of the comic, in theory, and it's better for believability to show the titular ladies holding the Decepticons off, but ultimately needing giant robot help at the end than for three squishy humans (and non-combatants at that) to actually defeat some of the fiercest Decepticons out there unaided.

Furman avoids a last minute deus ex machina by setting up the Autobots' dilemma believably and intertwining the two plots in a logical fashion. I especially like the characterisation of Goldbug, looking for any excuse to go back and help Ultra Magnus after making the decision to leave him. Obviously the Autobots cannot leave humans in danger but they have no real evidence that Joy, Cindy and Susan haven't simply slipped away after realising how dangerous the Decepticons are. It makes perfect sense that Goldbug, formally Bumblebee, friend of humans and all round compassionate character is only too eager to go back on his logical, but cold, decision, despite the probable consequences. It marks him out as one of the more "human" characters but also demonstrates that he struggles to be decisive when lives are on the line.

As far as the other characters are concerned Furman does not really portray Goldbug's decision as anything less than the right thing to do but the ominous nature of the last panel indicates that perhaps letting Galvatron go undamaged was a very bad idea indeed. I genuinely cannot remember if it ever is, but it would be very interesting indeed if Goldbug's involvement here is mentioned again when Galvatron does inevitably escape. Even if not, the final panel is enough to make us worried that things are not going to pan out well for our heroes, helping to redeem the story after the final "joke".

The other fun piece of characterisation is Furman's care to make Swindle's few lines all about his mercenary nature. Lines like "There goes my resale value!" after he is blown up are cheesy but almost essential in a comic that has a to juggle an immense number of characters, many of whom appear and disappear with little fanfare.

edictably, a big step up from Reed's. His humans look more human and, amazingly, his robots look more robotic. You would think perhaps one would affect the other, but this is not the case. The action is clear and crisp although the scale problems from last issue are not completely gone - Susan really is awfully small in Onslaught's hand.
Ladies' Night was reprinted in Titan's Legacy Of Unicron collection. It is, like all of their lovely oversized collections, out of print, but easy enough to find. Unfortunately neither Joy Meadows or Cindy Newell were ever featured in the book again but Susan Hoffman does return in issue #215.

We have a long way to go before we hit that, however, so I invite you to check back later in the week when I will have continued my slow, but inexorable, march to the end of the Transformers UK continuity by reviewing a story about Starscream at Christmas... apparently he's not keen on it.
Posted by Bishbot at 10:54 AM

yeah, scale seemed to be a big issue with transformers. Part of the problem was that early issues showed transformers with humans in their hands, while dramatic, it did set a general height for the larger figures at around 30-40 feet tall, sometimes larger. yet they "shrunk" down to vehicles that were under 15 feet long. in both this issue, and the last, this disproportionate scale issue seems to have been in an effort to make the combaticons look much more intimidating than the throttlebots and human military. nothing says out classed than a robot that can crush a jeep with one hand. but it does mean that some characters in both issues are at least twice as tall as they were in the American issues or previous UK ones. you would think an experienced TF artist like Senior would be a little more consistent?