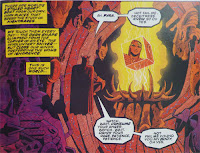 We begin in Styrakos, the same alien dimension that opened the last chapter, with equally atmospheric prose: “There are worlds a stilled heartbeat from our own; dark places that breed the stuff of nightmares…”. The hunter from part 1 is cross-legged and levitating in his sanctum, spying on the events of 8162 via a mystical cube.

The hunter, silhouette resembling the original Death’s Head, comments that Pyra’s wrathful revenge has played into his hands, and she has found his ‘body’. He watches Pyra send Big Shot and the DHII spacecraft through a portal, which opens behind an unsuspecting Death’s Head in 2020. He then claims he will deny Pyra, “…then shall the hunt begin! Oh yes.” 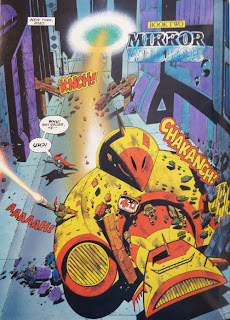 The title splash has the DHII spacecraft bursting from the portal, sending Death’s Head sprawling. It careens down the streets of 2020 New York before crashing into a glass wall. Spratt and the vulture tumble out of the crash, followed by Big Shot, bleeding from dozens of glass fragments and snarling revenge.

Death’s Head seems dumbstruck by their arrival. Despite Spratt’s entreaties, he remains rooted to the spot, unable to compute Big Shot’s drive for revenge. Big Shot blasts him in the shoulder, then follows up with a charge and a severe pounding.

They are interrupted by the arrival of several police on hoverpods, once again on Death’s Head’s side (he really is popular in 2020). Big Shot immediately blasts them from the sky, but the distraction allows Death’s Head to recover and knock his opponent down. While he cannot understand revenge as a motive, he attaches his axe with a look of malicious glee, admitting that, “… I am going to enjoy the next few minutes, yes?”

Despite heckling from Spratt and the vulture in the peanut gallery, Big Shot verbally strikes a nerve when he accuses the mechanoid of enjoying the kill just as much as any bounty hunter. Shocked, Death’s Head stops fighting to deny the claim and Big Shot smashes his cannon over his head. At the cost of his own arm, he stuns Death’s Head (even knocking off a horn) and moves to finish him: gouging his fingers into the optic sensors. 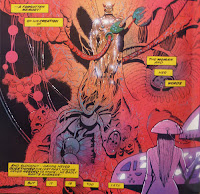 “He is going to die” the captions inform us, reporting on Death’s Head’s inner thoughts. In that moment, a memory surfaces of his creation: a bare mechanoid is surrounded by a number of organic tubes and veins. A woman is standing at a computer terminal, wires connected to her helmet, as we learn that Death’s Head remembers, “The woman and her words”. Having never questioned his origin, he has a sudden desire to know – only to realise it is too late.

Death’s Head is saved as Big Shot is zapped off his feet by a bolt of magic. Pyra appears from the shadows, her magic pinning Big Shot to the wall. The mercenary is confused about why she would stop him from fulfilling her vengeance (as is the hunter, watching from Styrakos) and even Pyra seems lost for an answer. She soon recovers her composure and claims the reason she stopped Big Shot from delivering the killing blow was so she could do it herself.

The mechanoid is ensnared in magic energies as Pyra cries revenge, “…the Ty Rejutka Lupex – has hunted his last hunt!” Death’s Head registers the name and protests that he is not Lupex. Before he can finish speaking, he is vanished away. Pyra screams frustration at being denied, before allowing herself a private smile.

Death’s Head reappears in the Styrakos dimension, still protesting that he is not Lupex. He gets his answer, “Is so, but I – I am! Oh yes.” We see the hunter in full: a man wearing green body armour, metal-banded arms and legs, leather gauntlets and boots, red cape and horned/tusked helmet. Death’s Head response is a bemused, “Dad?”

At half the length of the previous story, this book is basically a knock-down, drag-out fight between Death’s Head and Big Shot. In between the violence, the story moves along smoothly to the final act. Both Pyra and Lupex put their promised schemes into action, Big Shot gets his confrontation, and Death’s Head is transported to the final stage, sufficiently damaged to make his last stand a desperate one.

There even develops a motive to learn about Death’s Head’s origin (very convenient, for sure, but the ‘life flashing before his eyes’ device is a good way of raising the issue without making it too contrived) and the brief glimpse at his creation scene is intriguing.

Given that he was minding his own business before people started leaping out of portals to kill him, Death’s Head is more of a bystander in this chapter. As with previous stories, the mechanoid is not at his best when he’s reacting to events, but the numbed response is still surprising (why does revenge surprise him - does he not remember High Noon Tex?). 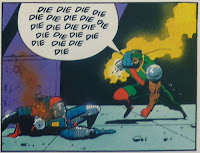 Getting beat up for three pages without even throwing a punch is most unlike the character who can usually adapt to any threat, in any era, at a moment’s notice, and I was shouting along with Spratt for him to do something. But in the context of his malaise from the first chapter, this passivity seems appropriate. It not only tells the reader that something is wrong with the protagonist, but sets up Big Shot as a threat so credible, Death’s Head may not live to put it right.

Big Shot is at his psychotic best here. His single-minded pursuit of revenge – even destroying his own arm to do so – shows up Death’s Head’s troubled hesitancy. They still have a great rapport, and even in the throes of combat there is a contrast between Big Shot’s furious rhetoric and Death’s Head’s unflappable cool, “I am the Avenger, the Instrument of her Vengelust! I AM DEATH!” “You’re a loony, yes?”

Apart from a background appearance in the next chapter, it’s the last we see of Big Shot. He was a great antagonist, probably the best of the series, although having come as close as possible to killing each other, I’m not sure where the enmity could have gone from here (although both being mercenaries, it would have been fun to see them forced to cooperate on a case). 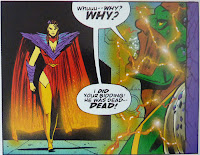 The final reveal of Lupex is a brilliant cliffhanger. While his appearance had been alluded to, the full-length image of a precursor to Death’s Head is a powerful one. Clearly Pyra’s plan has worked out, but it seems to be what Lupex wanted too. Either way, it doesn’t look good for the mechanoid.

Senior’s artwork remains of an exceptionally high standard. The cocoon of Death’s Head’s creation looks wonderfully techno-organic and some of the magical energy really crackles with the light and colour.

I prefer the depiction of Pyra’s entrance in this chapter – striding forward purposefully – to her previous one, where she just stands a little awkwardly. Like her character, Senior’s rendering of Pyra appears to be developing throughout the story, and for the better.

The actual fighting scenes are a little flatter than I would have expected from Senior. I think this may be a consequence of the less cartoony artwork – there are hardly any movement lines or small, quick-fire panels, which he can use to good effect. Even so, some of the ‘static’ fight panels are magnificent – the image of Death’s Head clipping on his axe is one of my all-time favourites.

Next week: In the best traditions of epic science fiction, Death’s Head confronts his father: chapter 3 is Hunted!

The Body In Question, Part 2 was republished ‘Death’s Head Volume 2’, and in a larger format in the original graphic novel.

The art for this, not just the line-work but the whole completed page, looks fantastic.