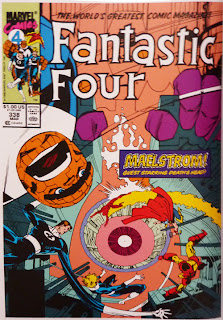 Series over, Death’s Head begins his brief career as a guest star in Fantastic Four #334. The writing and drawing was by Walt Simonson (who apparently had a liking for the character), lettering by Todd Klein, colouring by Max Scheele and editing by Ralph Macchio.

The cover, by Simonson, depicts the Fantastic Four and their allies for this issue (She-Thing, Thor and Iron Man) falling into some kind of spiralling vortex. The perspective is dramatic, and She-Thing’s fearful expression adds to the peril. The huge pink fingers on the edge of the picture might give too much away about the final villain, but it just about works as foreshadowing. “Maelstrom!” the caption reads, “Guest starring Death’s Head!” (although I can’t imagine there were many who bought this comic for the guest star – myself excepted).

This issue is actually the second part of what will be a long-running saga, and the splash page shows the ‘Rosebud II’ time-sled, with all the aforementioned passengers (Ben Grimm in human form this time). The sled is entering a Time Bubble that has disrupted the flow of normal time, prompting this investigation.

Riding the wake of the sled are three Kangs (from the Council of Cross-Time Kangs, a collection of alternative universe Kang the Conquerors and their successors). Also caught in the time stream are Dr Druid and Terminatrix. They are too far behind to follow, but Dr Druid is able to mentally propel Terminatrix into one of the passengers. 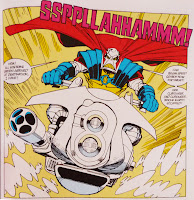 At that moment, Human Torch screams (giving a clue as to who Terminatrix has possessed) and the sled arrives in a city of the future, where time as slowed to a crawl. As Reed locates the source of the anomaly, another time portal opens and out pops Death’s Head on a rocket-cycle!

In the traditional style, the two groups mistake each other for hostile and skirmish for a page or two until Ben recognises Death’s Head from their earlier encounter and a truce is called to compare notes.

Death’s Head has been hired by the Time Variance Authority to investigate and fix the Time Bubble. He assumes that the Fantastic Four are that anomaly, but an attack from one of the Kangs (specifically Kang of Earth-Mesozoic 24) forces him to reconsider and team up with the superheroes. Kang’s defences are quickly subdued by Death’s Head's photon cannon, who then catches him in a big net that swings out from his cycle.

The lizard-Kang is defiant to Reed’s questions, and Death’s Head takes over the interrogation, “Richards is human and feels kinship with all living beings, even scum like you. But I am a mechanoid and nothing would please me more than to rip out your eyes with my bright shiny teeth and feed them to you one at a time. Speak, yes?” Kang spills everything he knows.

Ignoring Johnny’s uncharacteristic suggestion that they kill the helpless Kang, the Fantastic Four join forces with Death’s Head and Thor teleports them all to outer space - the source of the anomaly. There they discover a galaxy-sized construct that is pulling in the whole universe.

Before they can go further, the remaining two Kangs (Chairman Kang and Kang of Earth 123488.2349) attack. Iron Man distracts Chairman Kang, Death’s Head neutralises his defences, Thor's hammer clobbers him and Reed hauls him in. The other Kang identifies the mechanoid as the main threat and shoots his time-cycle. The blast damages the cycle’s probability generator, which means Death’s Head is forced return to his own time. He disappears with a resigned, “This probably means no fee, huh?”

While the Kang is still firing at Death’s Head, Human Torch hits him with a nova blast, killing him instantly and without pity. Chairman Kang recognises Terminatrix and leaps off the sled to save himself. Human Torch/Terminatrix pursue him into the core of the construct – which is a black hole. The sled races after Torch, as Chairman Kang is sucked into the black hole and killed.

Looking around, Sue realises that the construct was actually Galactus, intent on devouring the whole universe. To make matters worse, the black hole is pulling them in… 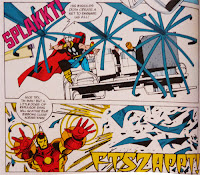 Not perhaps the best of stories for the casual reader. There’s lots of action, and it tears along at a ripping pace, but there’s not much else. Since it’s part of a bigger story arc, the characters don’t noticeably develop (I assume there will be some ramifications from Johnny’s possession), and the villains don’t really add much tension, since their schemes are either far-reaching (like whatever Terminatrix has planned) or immediate (the succession of Kang attacks).

But I doubt this was intended to draw in Death’s Head’s fanbase to the Fantastic Four title, and he is serving the comic more than it is serving him. Indeed, he does make a pretty good guest star: his motives are clear and in-character, and he adds something to the group (Kang-busting weapons and a mean interrogation technique) without hogging the limelight. Even his rather-convenient departure from the story is useful to the plot, allowing Torch to ‘overreact’ and kill the Kang.

Simonson’s characterisation of the mechanoid is very good. Death’s Head is competent, adaptive and always businesslike (he remembers that Reed betrayed him in their original deal, but quickly dismisses revenge as unproductive). His interrogation of the lizard-Kang is a nice character moment, and wins the approval of the similarly no-nonsense Grimm (it somehow fits that those two would find common ground).

Simonson does a good job with Death’s Head’s verbal style, although it’s a pity that his first appearance has a somewhat clumsy, “All systems green! Arrived at destination, I have!” which makes him sound like Yoda. But for that, and maybe lacking a few dry witticisms, the character is barely discernible from Furman’s version. It’s a testament to the strength of the character (and the writing) that it can be passed around so easily.

The artwork is a little disappointing, particularly after the excellent Simonson cover to issue 9. There is some nice movement in there, but the line work seems a little rushed and some panels could have really benefited from a dedicated inker. The colouring seems uninspired, even taking into account the more limited number of colours on US comics, and sometimes the sense of scale can’t match the rhetoric (such as trying to depict a machine the size of a galaxy.) Perhaps this was in keeping with the style of the title, but it didn’t encourage me to buy more issues to find out.

A housekeeping note about the order of the reviews: chronologically, and in the collected works, the She-Hulk story came before this one. But it makes better narrative sense to have the Fantastic Four issue first, and so…

Next week: Death’s Head takes on She-Hulk and a host of bargain-basement bad guys in Sensational She-Hulk 24: “Priceless!”

That's a GREAT initial shot of DH riding in on the rocket-cycle!

curiously enough I was reading both She-hulk and FF at the time and I picked this issue up first, so this matches the reading order I remember.

It is a shame Simmonson gave him more of a Yoda like speech pattern instead of his more usual one, and Simmonson did indeed fumble the ball when it came to the one liners. But I guess his intention was not to detract from the drama of the larger threat.

I have to admit I like Simmonson's era on the FF but his art is so stylised that it's an acquired taste.