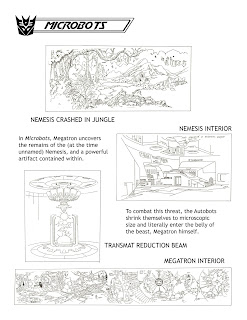 This week in The Ark Addendum... MICROBOTS!  Part 1.  No, it's not a two-part episode, I just have some more designs from the episode.  Unusual ones... but we'll get to that next week.

This week's installment is the backgrounds and props from the episode.  As we all remember, the Decepticons discover the remains of their as-yet-unnamed starship, which Beast Wars would dub Nemesis.  Inside is the Heart of Cybertron, which powers up Megatron and prompts the Autobots to shrink down, Fantastic Voyage style, and infiltrate Megatron's body.

To me, the stand-out models here are Floro Dery's take on Megatron's insides.  He reused some of this imagery for the inside of Unicron a little later.  It's just a lovely alien landscape, bizarre and compelling.  Hats off to you, sir, hats off.
Posted by Jimtron at 11:57 AM

Eat your heart out Jack Kirby.

For some reason it bothers me when people call it the Nemesis in G1. It wasn’t called that yet, and I don’t want G1 contaminated with Beast Wars terminology. :-)