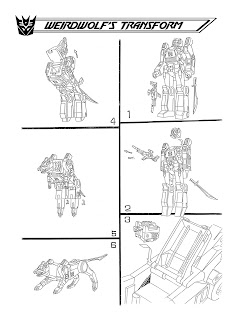 And, we're back!  This week's Ark Addendum bounces back to the Headmasters!  Yup, it's another extended transformation sequence: Weirdwolf!

As an aside, I really liked how all of the smaller Headmasters from 1987 had head-based names.  Brainstorm, Chormedome, Hardhead, Highbrow, Mindwipe, Skullcruncher... very clever.  And then there's this guy.  I'm betting he originally had a name like Snapjaw or something, and it failed to clear, making him the odd man out.  Shame, though.  I guess it was hard to keep up, because by 1988 only one of the six new Headmasters had a 'head' name.
Posted by Jimtron at 7:56 AM

The style of this looks very different, less dynamic, then the other Headmaster's Transform sequences. For that matter the drawings seem more detail oriented. Was this made for a commercial I wonder?

Possible.
Speaking of details, weird how they appear out of nowhere while he transforms and when he's done transforming -POOF! Additional details vanish.