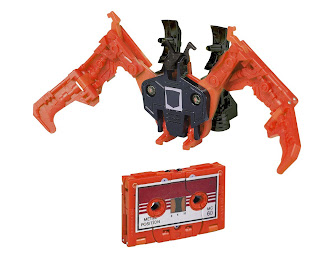 So, I'm perusing the news section of Seibertron.com, as I often do, and what do I spy but some listings for upcoming Sounblaster / Twincast Encore releases.  Ho hum, already got em... wait a moment!  What's this?  They come with new cassettes?  Sweet!  Twincast gets redecos of Ravage and Steeljaw, with weapons swapped, kinda neat.  And Soundblaster... Wowzes!  Soundblaster comes with redecos of Frenzy in all red as 'Enemy' and Ratbat gets an orange redeco as 'Wingthing!' 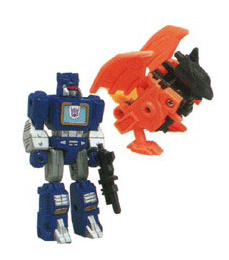 Let me explain.  Wingthing, if you don't know, was the little animal companion that came with Action Master Soundwave.   He was an orange and black little winged demon thing that turned into a gun.  Not bad, but nothing special either.  Still, Soundwave has always had a menagerie of animals, so why not one more.


Flashback to me working on The AllSpark Almanac II.  Derrick Wyatt gave me some of his late sketches, drawings, and brainstorming.  One of them is a pretty neat drawing of three Laserbeak repaints: one in blue, one in black and gold, one in orange.  Well, nifty!  I could do a page with them.  I came up with a story for them, ran it by Derrick, added his notes
(Originally I had it explicit that they didn't have sparks, unlike Laserbeak and Ratbat.  Derrick rightly pointed out that it was better to leave that ambiguous.)  Still, one page with three of the same image and nothing else seemed off to me.  So, I looked at Ratbat.  What could I repaint him as that would make sense?  There hadn't ever been a redeco of the Ratbat toy, nor a generic based on him.  Hmmm... Ah, yes, of course!  My old pal Wingthing!  So, colored her, wrote up a bio, and we get another piece of canon to enjoy.

So, when I see that TakaraTomy is running with my idea, I get a warm and gushy feeling inside.  Might they have done it anyway?  Of course, I'm not that big an ego maniac.  But I can't help but feel that I had a big part to play in this deco.
Naturally, I'll be picking up a copy.
(BTW, Wiki folks, yes, I know that a lot of you guys are pretty stoked about Enemy.  I'm happy for you, but it's not my thing.)
Posted by Jimtron at 8:43 AM

They probably would have done Wingthing anyway, but who was it that leaked that TF:TM draft script a year ago? Without that, you can be damn sure that no one would have ever heard of Stripes the tiger, whom the orange Ravage is supposed to be, so someone's ego deserves to be stroked for that.

And yet, he will make the absence of a passable Stinger in everyone's cassette collection all the more glaring. Say, that 3rd party company that made the Gear of War set with Autoscout has a scorpion in their logo, right? Perfect match! Get on it guys. Your Autoscout was a better toy than iGear's anyway, despite being less show-accurate.

And as awesome as it is for Nightstalker to finally get a toy, it's a shame he fell into the same trap as RoadHauler and wound up being inaccurate to how he's described in the story because he was too similar to another character's toy. How much you wanna' bet he becomes the scarcest and priciest on the secondary market because of fans repainting the head to match Shattered Glass Steeljaw, Walky's Black Lion homage in Recordicons?

Oh, and thanks for making Wingthing female, since she needed to be more distinct from Ratbat, what with their deco patterns being too similar except for the head.

Soundblaster now also has a show-acurate purple cassettehatch instead of a red one. Not to be missed, that re-issue :)

CHMS is also releasing knock-offs of two dinocassette-combiners, Dairu and Zauru, who combine into Legout. These are extremely rare and expensive (so in this case KO's aren't that much of a problem, right? It's not as if Takara was ever going to re-issue them anyway...), but the KO's seem to be extremely high quality and exactly identical to the originals (including the boxes).

So it seems to be a good year for cassette fans!

Not to downplay anything you're saying, Bumblevivisector, but we've actually known about Stripes for over ten years.

I really wish people would stop saying "Diaru" and "Zauru".

back when the action masters came out, I was seriously disappointed that Soundwave didn't come with a recognisable minion. it wouldn't have been that difficult to create a target master like figure companion that resembled say ratbat or laserbeak and would have gotten a far less luke warm reaction from fans. yet curiously this obscure and unloved little chunk of nostalgia has actually come full circle and BECOME recognisable. My only real complaint with the updated version is that ir isn't different enough from rat bat to warrant a different name. but I can't knock takaratomy for trying.

as for "stripes" I'm very unsure about that figure even from an obscure beast wars inference. surely with more well known repaints of ravage out there creating a brand new character was redundant. besides if I was to pick up twincast I'd want him with steeljaw or ramhorn, not ravage regardless of him getting a new name.