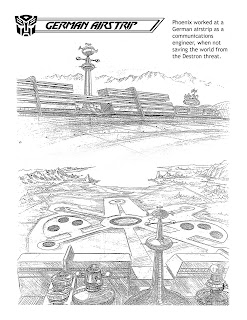 The Ark Addendum for this week is once again drawn from the Masterforce era.  This time, some of the backgrounds: a German airstrip, where Phoenix spends his time when he's pretending to be human.  While most of the vehicles from Masterforce seem to be late 20th century, the architecture certainly is somewhat futuristic.  I'll post a few more over the next few weeks, but this one is pretty representative.
Posted by Jimtron at 6:56 PM