War of the Worlds, Season Two, coming out on DVD! 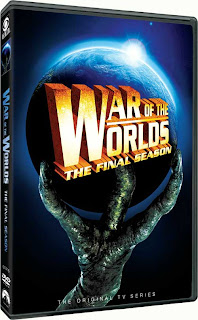 I suppose it was bound to happen sooner or later.   War of the Worlds: The Final Season

, is to be released in DVD format.  It'll be out in October, and is available for pre-order now.

I've been reviewing them, episode by episode, on the blog.  I'm still relatively early in the season.  I think I have to say that it doesn't deserve the horrible reputation it has.  Its biggest sin is deviating from the format of season one, but it still manages to tell some interesting stories, many of which really couldn't have happened with the old format.  That said, neither season one nor season two can really properly be considered good.  Interesting, sure.  Campy fun, especially season one, yeah.  But they're not actually quality.  I'm going to be picking up season two, but I'd really only recommend that you the reader do so if you've already got some kind of nostalgia connection to the series.
Posted by Jimtron at 9:50 AM

And as you know I definitely have a nostalgia connection to the series. :)