Deviations from the Norm 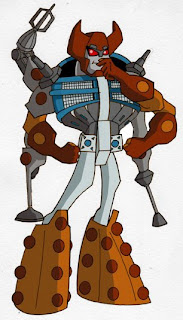 It's that time again; my esteemed colleague Bill Forster has updated his Deviant Art gallery with yet more of his original artwork from  The AllSpark Almanac II

This time around, he's uploaded our Reverse-Pretender alter-egos, Octus and Megadeath, some heads from the Great War like Moonradar and Gigatron (a.k.a. RID Megatron, Animated style), some Maccadam's heads like the adorable Clipper, and more.

I think my favorite might be Skids.  While, obviously, it was movie-style Skids that inspired the design, the idea that he'd be infested with brain parasites came from G1 Skids, where he spent well over 100 UK issues in limbo after Galvatron time-displaced him there.  I thought it funny to include this element, but with the much uglier RotF Skids.

Swing by, let Bill know what you think of his work!
Posted by Jimtron at 1:46 PM