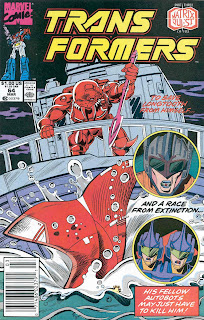 Deadly Obsession is the sixty-forth issue of the US G1 Marvel Comics run of Transformers, and the third chapter of the Matrix Quest.  It was written, as always, by Simon Furman.  Pencils are by José Delbo, with inks by Dan Reed (along with Al Williamson for the first four pages.)  Massara and Yomtov provide lettering and coloring.  The cover is by Ian Akin.

The cover is very comic-booky.  Longtooth stands on a ship, spear in hand, as the tail of a techno-organic whale splashes away from him.  They're block-colored, which actually makes them stand out fairly dramatically from he background.  In two circles on the right hand side, Longtooth's fellow Autobot Pretenders look on in shock.  The cover narration explains the action: to save Longtooth from himself... and a race from extinction... his fellow Autobots may just have to kill him!  I think the Longtooth cover would have worked well enough without the words or his Autobot brethren.  With them, the whole thing seems a bit too busy.  The shame is, I rather like both Longtooth and the whale (technically a Klud) in this rendering. 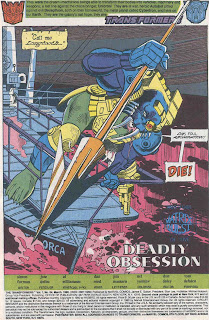 Once we move into the issue, we're confronted with an odd morass of flashbacks.  We open well enough, with a one-legged Longtooth hunting the whale-like Klud, overlaid with Melvillian narration, beautifully rendered by Massara as a scroll.  "Call me Longthooth..." perfectly sets the tone of what is to follow.

Before he can pull the trigger, we slip to a point a few minutes earlier in the story, where we see Pincher and Doubleheader zipping along the surface of one of Pequod's mercury seas in their modified shuttle craft.  Their goal is to save Longtooth from himself, we find, before they shift into a nested flashback sequence where they start with some exposition about the Matrix Quest and go on to explain the interest in the Klud in the first place.  This race, long thought extinct, seems to have made a comeback, and the Autobots suspect Matrix involvement. The narrative structure is clumsy, though, with a flashback within a flashback, and is therefor more confusing than it had to be.  One can certainly follow along, but it seems like a long way to go to open on the image and the phrase that Simon chose to go with. 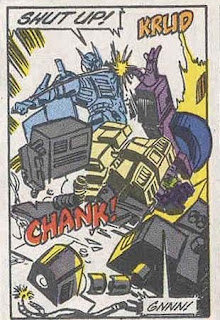 Back in the present, both the Autobots and the Decepticons act to safeguard the Klud from Longtooth.  Thunderwing wants to mindlink with the beast to find out where it encountered the Matrix, the Autobots just want to save Longtooth's spark.  Echoing the theme of obsession that Longtooth exhibits, Thunderwing too seems to be going over the edge, though in his case it's with Matrix-fever.  His backhanding of Ruckus is rather nice.


The Autobots show up in time to save Longtooth from the 'Cons, though not before Longtooth is dumped into the drink.  We go to the rest of the flashback, where we see Longtooth loose his leg to the beast in the course of their investigation.  This, combined with the vision of the creature sends him over the edge. Again, there's not much reason to have this part of the story be in the middle, rather than the beginning, but at least the artwork is especially gorgeous.  (More on that later.)

All that's left is the shouting.  Needlenose and Windsweeper engage the Autobots, while Thunderwing learns what he can from the beast.  It's enough; he's to go to the third moon of the fourth planet, VsQs, where the Matrix awaits!  Pincher convinces Longtooth that it's his sacred duty to allow the Klud to live, though he has to leave Doubleheader all alone in the sky to do so.  Sadly for the Decepticons, they're unable to exploit this vulnerability due to Thunderwing's own deadly obsession; he yanks their leash and they abandon this briny world.  Pincher doesn't see it as a defeat, though the Decepticons apparently got what they wanted.  In his mind, the real victory was Longtooth's choice. The climax feels rushed and somewhat perfunctory.  One or two more pages might have helped.  I'd posit that a more linear plot might have given Furman some extra room to play with.  It also hurts that we never really see Longtooth make his choice, or indeed the aftermath of that choice.  For a story ostensibly about him, this seems like a big oversight. 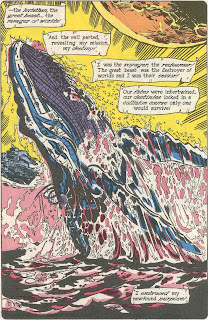 Overall, a somewhat odd middle chapter.  After the strong start the Matrix Quest got itself off to, I'm finding myself less and less interested.  The genre-straddling narration seems to divide rather than unify the five-part story.  It almost seems self-indulgent.  Keep in mind, Furman hasn't been on the book all that long at this point.  This is only his ninth issue in the US, so it seems odd that so soon into his run he'd shift the book into this sort of experimental phase.  (As it turns out, I needn't worry; from issue 65 on he'll return to more traditional comic-book storytelling.)  It's not a bad story, it just seems like there's a bit too much going on.  On the plus side, unlike last issue it seems like the story is legitimately advancing now.  We know where the Matrix is, and we have two whole issues to go.

The art of the issue is a bit mixed.  Reed's organic inking and Delbo's mechanical drawings don't always mesh well.  However, there is an absolutely gorgeous splash page that's well worth the price of admission all by itself.  It's a BEAUTIFUL piece of Delbo / Reed / Yomtov / Furman / Massara collaboration, absolutely gorgeous.  The colors, the inks, the pencil, the prose, the lettering... this one page is what this whole book was about.

Next issue, we're promised Bumblebee, Jazz and Grimlock, along with Thunderwing's Decepticons, in an all-out war with the DARK CREATION.  That sounds fairly exciting.  Deadly Obsession is available in IDW Publishing's Classic Transformers, Vol. 5