Review: War of the Worlds, the series ep 30 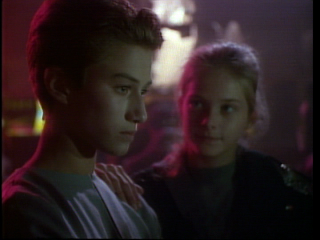 The thirtieth episode of War of the Worlds, the series is titled Loving the Alien.  Debi, tired of living in a sewer underground, rebels and heads to the city alone.  There, she encounters Ceeto, an alien youth who has done the same thing.  They befriend each other, which survives the revelation of his otherness.  However, their friendship puts them on a collision course with an alien mission to retrieve a missing weapon, precipitating a confrontation between the Morthren and the Blackwood project.  The weapon is destroyed, some newly introduced human allies of the Blackwood Project get killed, and the adolescents are returned to their respective societies.

The Good: Quite a lot, actually.  The episode is very well structured, directed and paced.  Each part flows logically into the next. I like the symmetry between Debi and Ceeto, though there's also an issue with that that I'll get to. 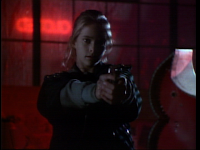 When Debi first realizes what Ceeto is, thanks to a cut on his arm, she immediatly levels a gun at him.  Kincaid has trained her well.

There's a bit of nice continuity with Debi's use of pepper spray.  We saw her armed with this last week when she headed to the market.

I rather like the idea that a cut to the aliens is quite dangerous, due to infection.  It carries on the theme from season one about Earth's bacteria being dangerous to them.  Even with these new, better-adapted bodies, there is still some risk. 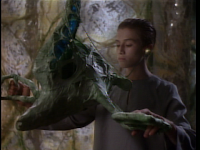 Alien teaching tech is fun too; the episode opens with some alien youths learning about both Earth and the wider galaxy.  "In the battle of Meanties in the fourth quadrant of the Lor galaxy, how would you have deployed your troops to defeat the rebels?" is a great question.

It's also cool to see other fighters against the aliens besides the Blackwood project.  It seems like the team would have a hard time going it alone; apparently, they don't have to.  However, I'd have liked to have seen this idea set up earlier with some recruiting.  Marcus and Joe Crane meet bad ends, but now I'm wondering if there are other allies out there we haven't seen yet.

Good acting.  Ceeto, especially, as played by Keram Malicki-Sánchez, pulls his weight.  He looks great when wandering around the city, very much capturing a kind of tourist feel.  He's got the stoicism of the Morthren down, but brings with it an earnest youthfulness that works well.  Forest's Malzor is also strong this episode.  He has more to do here than he sometimes does.

The Bad: Coincidence.  Debi runs away from home on the same night that an alien does, and then they just happen to run into each other.  The episode is strong enough that you don't notice, but this is definitely a flaw.

Timing.  Last week, Harrison fell in love with an alien woman.  This week, Debi finds one.  These episodes would have worked better if spaced further apart.

"You are the only species that kills its own kind."  Umm... really?  Do you not remember The Second Wave, when the Morthren executed all of the first season aliens? 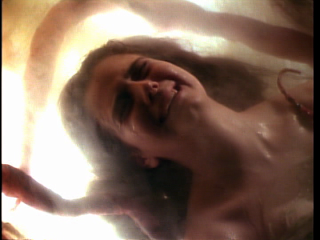 The Ugly: Again, it's not as horrific as anything we used during the first season, but after the aliens are done with the original Joe Crane (played by a very young Mia Kirshner) they have no use for her.  She gets cooked on the cloning bed rather painfully as Ceeto looks on.

Overall, a very strong offering.  If only it wasn't immediately after Seft of Emon, I'd have almost no complaints.  By the way, now we've had two members of the team make peaceful contact with an alien.  This meeting, in particular, will have payoff later in the series.
Posted by Jimtron at 10:30 AM

"Loving the Alien" is a mixed bag for me. I did enjoy:

- The fact that the Morthren were using mercenaries to do their dirty work, which spares their own people from being killed. A very clever move on Malzor's part if I do say so.

- I enjoyed Ardix stepping out of the shadows to capture Jo. Very well done.

- It was nice seeing a young Mia Kirshner (this was her first role to the best of my knowledge) before she gained fame later on in Exotica, "24" and "The L Word". Unfortunately, her character Jo, died a pretty cruel death but it was still great to watch.

- I enjoyed Mana's snarkiness towards Malzor. It's always great when Mana delivers the criticism to Malzor, it makes things very tense.

- I also enjoyed the direction of this episode.

Now, all of those positives being said, I don't like the idea of the Morthren being stereotypical invaders who are human on the inside. It sort of lessens the threat of the Mothren as a whole, if we see that their cruelty has to be learned, not ingrained.

excellent review and comments. dead on. i've only noted Karim Maliki Sanchez in two other shows (which i've seen) and he was good both times (24 is one of those, ironically).

oh yeah, i think Blanchard stated that not only was this her "first on-screen kiss" ... it was also her first kiss.

it's neat to see that WOTW took a character that was just "the daughter of a main character" and grew her as much as it did. with some exception, they grew Debi into a tough and smart fighter with a heart. it's ultimately sad what she loses overall, but it makes for a great development process for an otherwise "pointless" character. this is one of the primary ways in which S2 actually manages to outshine S1: both Debi and Suzanne were expanded and far more active than in S1. i don't think it was necessary to kill off Ironhorse to accomplish this but hey we all pretty much already agree with that... (especially since Kincaid is the fighter character brought in to fill the place of Ironhorse... filling the space of the hole made by replacing the character he was created to eliminate... !!??). it would have been far more interesting to see Ironhorse adapt to being shut out of the military/government instead of seeing Kincaid already comfortably attached to the seedy underbelly of the "scary new world..." such wasted opportunity...

I Just rewatched this one. There's a scene in which Ceeto is wondering around the Alien's compound and sees a human-like person in a tube, much like Seft and her son were in the previous episode. I'm wondering if that person was also supposed to be yet another Alien that the Morthren "collected" after destroying it's world. The idea of them being parasites ( to quote Katara from Qar'to) that drain worlds of their resources then move on was a very interesting concept I wish could have been explored more fully.

That can a weird question: was Mia Kirchner naked?!

Ok. Naked but covered. But that was polemical in these years.

Why had Jo Crane died?

She did appear to be fully nude or at least in something very strategically covering, bodywrapped or mummified in a rubbery cocoon and covered in slime. Nowadays somebody would probably whine that she was somehow being exploited since she was about 15 at the time but the 80's were different.