The Ark Addendum - The Destron Base of Masterforce (part 2) 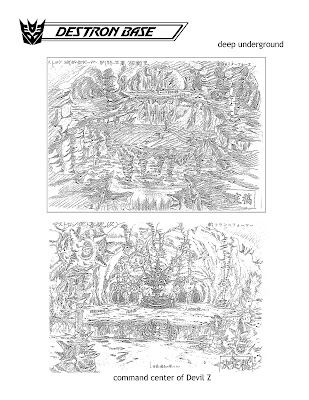 The Ark Addendum, like a thuggish brute shouldering aside all in its path, continues! This week, it's part two of the Destron base from Masterforce.

After seeing the outside of the base, we now go deep underground, to the caverns beneath the base, and a long shot of the command center of Devil Z.  Once again, this touches on material in  Transformers: The Complete Ark

(order it today!), where we featured a zoomed-in view of the bottom picture as well as a nice close-up of Devil Z itself.  I think it's very interesting that the Cybertrons lived amid technological splendor, whereas the Destrons lived in the natural caverns of this base, with organic trappings all about.  Transformers often explored this sort of juxtaposition; in Beast Wars II, the good guys were the animals facing off against technological foes.  Beast Machines explored a similar dynamic.  Car Robots / Robots In Disguise reversed that, with the heroes as vehicles and the bad guys as technoorganisms, at least to start.
Posted by Jimtron at 10:29 AM