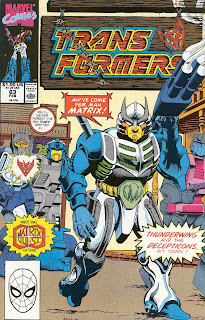 Kings of the Wild Frontier. is the sixty-third issue of the US G1 Marvel Comics run of Transformers.  Yes, there's a period in the title.  No, I don't really know why.  Furman stays on as the writer, and indeed will do so through the end of the run, and for all of the G2 run.  In fact, the only stories I'll be reviewing in this series not by the esteemed Simon Furman are Larry Hama's G.I. Joe issues guest starring Megatron.  José Delbo returns to penciling duties, with David Hunt as inker.  Jim Massara and Nel Yomtov remain as letterer and colorist, respectively. Ian Akin, who had done inks on many previous issues, does the cover.

Sadly, it's not a great cover.  Thunderwing and his Decepticons stand amid the backdrop of a old west-style town.  "Ah've come fer mah MATRIX!" he proclaims, rather amusingly.  The idea is great, but the exection is lacking.  Thunderwing has some kind of bizarre contrapposto going on, and his gun is off-balanced to his fist.  There's a strange off-model Decepticon symbol floating above Needlenose, and there are serious perspective issues.  Jim Massara, though, does some amazing stuff with the logo.  It looks fantastic.  The cover gets the job done, just not very well.  (EDIT: That's a branding iron - I totally didn't get that, thanks to a coloring flub and the incorrect perspective on the symbol.)

Inside the book, we open on a lovely sight, the Autobots coming in out of the sun with sand sweeping by.  Furman cleverly juxtaposes a bombastic, western-style narration with deliberately pedestrian dialogue for the characters.  To wit: Narration: "They came with purpose! They came on a mission! They came with dual phase concussion blasters on their hips!"  Override: "Nng.  Got sand in my optical sensors!"  Funny stuff.

The comedy ends soon enough, when some  rapscallions nearly bowl the Autobots over in their pursuit of a harmless-looking alien child.  Wearily, the Autobots spring to the rescue of the child, ignoring some subtle warning signs that there may be more than meets the eye going on here.  Nevertheless, they drive off the lizard-riding banditos and are soon enjoying the rather insistent hospitality of the family.  Furman does a good job making us believe that the Autobots would pick this fight, while planting little textual and visual clues that there's some kind of deception going on here.

Up in space, the Decepticons approach Cheyne, the western world, while interrogating Hosehead, Nightbeat and Siren.  I love the visual of the interrogation chamber, and Thunderwing's status as a majorly cool Decepticon leader continues to grow.

Planetside, things keep getting weirder in the little alien homestead.  Every time the Autobots try to leave, they're gently but firmly rebuked.  Soon they're hoeing away on the farm, wondering what it was that seemed so important that they've forgotten.  Ironically, it's Thunderwing who saves Dogfight from his raptured statue.  The Decepticon leader and his posse show up and question Dogfight while he's escorting the seemingly docile alien around town.  Dogfight thinks that Thunderwing his here for the alien, prompting Thunderwing to conclude that the Autobot is under mental control.  The cruel Decepticon abandons the Autobot to his fate, though fortunately the distraction has given the townsfolk time to drive off the alien.  Dogfight realizes he's been befuddled and goes to rescue his fellows.  After Thunderwing's surprise introduction at the end of last issue, this confrontation is a little unsatisfying.  True, the real climax of the book is yet to come, but he almost can't be bothered with the Autobot.  It works for the character quite well, but it doesn't service the story  as well as it might have. 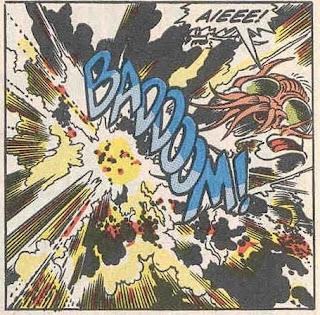 In the climax, the aliens reveal themselves to be psychic vampires who have molded the Autobots into passive food sources.  They're far less friendly looking in their true forms, with tentacled mouths and huge eyes.  The Autobots kill them off, which is something we don't often see in the G1 comic, though the one death that occurs on-screen is really initiated by the alien firing a bent weapon.  They wax philisophical for a moment, lamenting having their brief peaceful interlude snatched away, though it never quite rings true.

I see what Furman was going for, but I don't think he quite achieves it.   He doesn't quite make their life on the farm idyllic enough for their sacrifice of it to have the resonance that he wants.  It's also clear that the Matrix Quest is something of an excuse for Furman to play with different genres of storytelling; last time it was detective novels, this time it's the western.  It's an interesting experiment, but it sort of undercuts the idea of this being a mini-series within the main series.  The Matrix hardly seems to be Germain to the plot here at all.  Overall, a somewhat weak issue, especially following last month's much stronger offering.

Next issue, we learn that Longtooth, Doubleheader and Pincher are facing the last of the techno-organic whales in DEADLY OBSESSION!, which sounds Moby Dickish.  We'll have to see how it turns out.  Kings of the Wild Frontier is available in IDW Publishing's Classic Transformers, Vol. 5

Not quiet sure what you mean by "a strange off-model Decepticon symbol floating above Windsweeper". Windsweeper's not on the cover. That's Needlenose, Ruckus, Crankcase, Thunderwing, and Spinister, left to right.

Well, I guess I do know what you mean, but that's pretty obviously an (admittedly off-model) Decepticon branding iron being held by Needlenose, the source of the branding mark over the Autobot symbol on the logo.

Ah, so it is. The coloring on the cover made the handle of the iron look like another ray of light. I don't think Yomtov quite got what the artist was going for. I'll fix the Needlenose / Windsweeper gaffe, though.