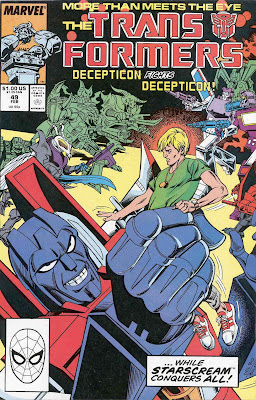 Cold War! is the forty-ninth issue of the US G1 Marvel run of Transformers.  The creative line-up is unchanged from the prior issue, meaning that the tale is brought to us by Budiansky (script), Delbo (pencils), Bulandi (inks), Yomtov (colors) and Oakley (letters.)  The cover is by José Delbo.

The cover feels like it should be better than it is.  Starscream looks diabolical while clutching Buster, with two factions of Decepticons going at it in the background. Thematically, it's perfect and the idea seems like a winner.  However, the execution leaves much to be desired.  The Cons in the backtround, rather than looking like they're about to kick some ass, seem static and lifeless.  Starscream looks diabolical but his anatomy, especially the positioning of his arms, seems way off.  the background guys have a weird mix of block coloring and standard coloring.  Either way might have worked, but the hybrid thing sure doesn't.

Thankfully, the issue itself lives up to the promise only hinted at by the cover.  Things start strong, with Ratbat leading a posse of Decepticons into battle against an incoming spacecraft.  Budiansky's prose is back in top form.  "On Cybertron, Ratbat was an Accountant.  He used to count fuel stockpiles [...] Today he prepares to count Autobot casualties. To Ratbat, it's all the same job ... just a different inventory." We get several pages of the Decepticons preparing for battle, including the introduction of the Seacons' combined form.  As "the prodigious powerhouse called Piranacon" prepares to smash a spacecraft that so blatantly landed right outside Ratbat's position, Starscream calls for things to halt. Ratbat reluctantly confirms the order, given how much about the 'attack' fails to add up.  As it turns out, this is Scorponok's crew, come to pay a visit. They even announced their intentions ahead of time, which Starscream 'forgot' to pass along in the haste of relocating away from the Caribbean. Ratbat chides Starscream for inviting Scorponok to visit now, on the eve of Ratbat's triumph, but Starscream argues that not only was it their duty, but that to put off these new Decepticons may arouse suspicion.  It's a terrific opening, full of barely-contained energy and tension.  The fact that not a single shot is fired only whets the appetite for what is surely coming.

After a token scene of the Autobots searching for the Decepticons, we head back to the main thrust of the action.  Starscream is giving Scorpnok and his fellow Headmasters a tour of the base, talking about everything but the Autobots.  Scorpnok is starting to get irritated by his dissembling, when Starscream gets to their prisoner, Buster.  Starscream gives the human plenty of time to talk, and he doesn't disappoint.  Buster quickly spills the beans about the Underbase, prompting Scorponok to angrily accuse Starscream of hiding something, which of course he was. When Starscream thanks Buster for his help, you just know he's up to something.  There's great facial work from Delbo here.

When Scorpnok confronts Ratbat, tempers immediately flare up. Scorpnok orders his troops back to the ship, but Ratbat doesn't want to risk letting him go.  He sends the Predacons to stop him even as Starscream flies off to 'execute' Buster. Naturally, Scorpnok doesn't care for being restrained and knocks the Predacons out of the way.  Seeing the disturbance, the rest of Scorponok's men pour out of the ship and Ratbat has little choice but to counterattack.  Events are playing out exactly as Starscream planned for them to, and we the audience get to thrill to some great Decepticon-on-Decepticon action.  Blitzwing evicerates Horri-Bull, Astrotrain steamrolls over Snapdragon, Bugly outsmarts Skywarp and so on.  Tantrum and Apeface have a spectacular little rumble, wherein Tantrum rips off Apeface's arm and spits it at him ... only to have Apeface bludgeon the Predacon WITH HIS OWN SEVERED ARM! Now, that's hardcore. 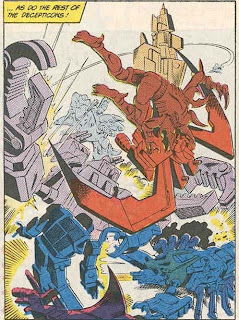 Meanshile, Starscream reveals the next phase of his plan.  He deposits poor Buster in an arctic wasteland with no special thermal gear, leaving him to freeze to death.  However, he also gives him a transmitter, set to the Autobot priority code alert.  He can save his life, if he so chooses.  But, with two factions of Decepticons already fully prepared for battle, Buster worries that it would be a slaughter.  Starscream isn't quite through yet, though. With all sides distracted, Starscream boards Scorponok's ship and takes off.  Ratbat, Buster and Scorponok all realize what's going on, and Buster decides that summoning the Autobots is necessary to stop Starscream.  He presses the button, and the issue comes to a close.

This is the strongest offering we've had in a long time.  Starscream shines more brightly than he ever has before, pitting allies and enemies alike against each other with aplomb.  The artwork gets the job done, and that job is showing off robots kicking other robots' asses.  It's also another rare Decepticon-focused issue, which is nice. Budiansky seems to have found his groove again, writing a tight and intriguing plot while also keeping his dialogue and narration fresh.  It's a real winner of an issue on all fronts.

Next issue, we are promised the giant-sized cataclysmic conclusion of the Underbase Sage, Dark Star! Sounds like a must-read! Cold War! is included in IDW's  Classic Transformers Volume 4

This issue was great but would have been better if not for the rampant block colouring of Decepticons found in this issue. It drove me nuts to see Delbo make an effort to display whole armies go to waste with such block colouring.

A reprint of this issue with faithful recoloring would be great. In fact, all 80 Marvel U.S. issues would also benefit from it.

There should be a ban on the words "block colouring".

I agree. A lot of fine art has been wasted by this type of coloring :)

Couple of funny things about the art. First of all, the credits for inking this issue go to Danny Bulanadi. And while he certainly did the cover (his autograph is on it), I'm almost 100% certain that the interiors were inked by Dave Hunt. Putting this issue and the previous one side by side should be sufficient proof :)

Also, while I always thought Delbo did a great job drawing the individual bots, it's pretty clear he only ever used the character models (and never looked at the actual toys). And Starscreams character model has his head tilted to one side. Which means you only get to see one of his two side head-airvents. And because of this, Delbo must have believed he only had one, and has therefore always drawn his head asymmetrically.

This has never been clearer than with this cover, just look at his head... :)

This is my favourite Budiansky story (and certainly top among the entire G1 run). A great build-up of tension and realistic (unlike many other occasions, when it seemed to be used as a gimmick – see Time Wars) escalation into faction-on-faction war. The unexpected guests are brushed off, then insulted - Ratbat panics and tries to stop them leaving – Scorponok’s crew view the knockabout and see it as an attack – the Earth Decepticons have to respond in kind.

Then follows some great fighting scenes. From Cutthroat getting his arm ripped off in the first panel, you can tell things are going to get rough (and seemingly much more violent than the fight on the Moon - either Delbo was getting into his stride or you could really cut loose when it was only bad guys in the mix).

Some great little touches too, like Ratbat’s evident disgust at the binary-bonding process (screaming at Scorponok’s ‘fleshy face’) – maybe his experience with Wash ‘n Roll soured him on partnership with humans (I don’t know if prejudice against nebulan/transformers has ever been explored, but it would make an interesting story) . Unlike Megatron-Shockwave contests, there was a real disparity in power levels between the two commanders, which only added to the tension: even if there had been no Underbase to fight over, you got the impression that Ratbat wasn’t going to stay commander for long – and he knew it.

My only request would have been for more pages (I would have gladly skipped the Autobot aside) of Decepticon carnage (I don’t think the Coneheads, Insecticons, Stunticons, Combaticons, Constructicons or Targetmasters made a foreground appearance).

You know, Chuffer, that's an interesting idea. I actually had the opposite idea, that Ratbat is in fact over-confident. He's clearly one of the weakest Decepticons on Earth, and yet he's the uncontested leader. Even Starscream doesn't feel like a trial-by-combat will likely get him anywhere, and he could surely take out Ratbat. Basically, wimp though he may be, he's charismatic and intelligent enough that the others follow him willingly.

I think that he's so confident in his position that he more-or-less forgets his relative power level, even in the face of these new Decepticons. This, in turn, allows Scorponok to take him out with a single shot to the back. I wonder how well that would have gone over had not most of Ratbat's troops been off-lined. Not well, I'd wager.

That’s a thought. Ratbat’s downfall being caused by hubris (starting with letting Starscream watch the Realvision message) makes a lot of sense. I suppose I always thought of him as a more panicky character because of the way he withdrew from the Moon battle (a smart accountant-like move, perhaps, but a more battle-orientated commander like Megatron, might have fully committed and taken the chance for total victory).

But Ratbat certainly held the loyalty of his Deceptions (unsurprising given their run of success with him). I also liked the suggestion (perhaps just in my head) that he was using the Predacons as some kind of bodyguard – setting them against his rival commander (he also took them hunting for Throttlebots earlier). It would certainly tally with his using intelligence/charisma to compensate for his lack of power.

An interesting character, and if I remember rightly, one of the few ‘permanent’ casualties from the Underbase saga.