Review: War of the Worlds, the series ep 19 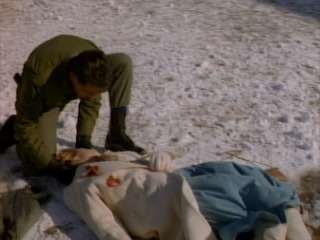 Vengeance Is Mine is the nineteenth episode of War of the Worlds, the series. It is a very intimate tale, about Ironhorse accidentally shooting a human hostage in the course of stopping an alien plot. Two lives are deeply impacted, Ironhorse and the victim's fiancee, Martin Cole. Ironhorse is breaking down a bit, reliving the moment over and over, whereas Cole (played by the late, great Denis Forest, who would go on to play the primary villain of the second season) develops an unhealthy obsession with Ironhorse, culminating in the kidnapping and planned execution of the soldier.

The aliens, meanwhile, have developed a laser weapon using human technology. In order to mass produce it, they need costly rubies, so they go on a crime spree to get the money. It's a rather elaborate plot, almost Pinky & the Brain-esque. Ultimately, Ironhorse frees himself and hauls Cole with him to Sacramento. Together, they foil the aliens with a remote-controlled helicopter laden with explosives. They day is saved, and the two men put aside their differences. 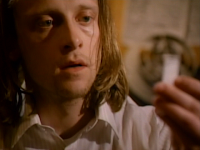 The Good: It's a very human episode, delving deeply into Ironhorse's seemingly impregnable exterior. Chaves does a great job with it, never overplaying it but trusting in the audience to identify with his struggles. It's nice to see him freeze up immediately afterward and allow an alien to escape. Next, he holds the team back when they want to head off to follow up on a warm lead, only to later want to rush off to deal with a cold one. His lack of balance is disconcerting, but in a good way.

Forest, too, turns in a great performance. He's does a wonderfully creepy, not-quite-right fellow. He wears his pain on his sleeve, and you can really believe that this man has been pushed too far and snapped. I can see why they brought him in in the second season. 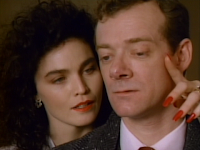 I rather like the all-too-human saleswoman trying to throw a dash of seduction into her sales pitch for the rubies. The aliens, of course, are somewhat baffled by it.

During the end, while aliens with an armored car full of money flee from Omega Force, they radio to the Advocacy for advice. Their council was simple: 'survive.' Sometimes, over-thinking a problem is the wrong course of action.

Blackwood, Drake and McCullough each try their best to engage with Ironhorse over the white elephant in the room. Ultimately, Harrison contacts General Wilson (DRINK!) and forces Ironhorse to take some time off.  He clearly needed it.

Ironhorse does a great job of rattling Cole. He describes, with increasing urgency, the certainty with which Cole will be found out, prompting his captor to slip up and allow Ironhorse to turn the tables on him. Even as a captive, don't count Ironhorse out. The scene is really well directed too, with the camera tracking Cole as he circles his captive.

The Bad: At the end, Cole and Ironhorse make their peace with each other. Then what, they just let him go? He's clearly a very unstable individual. Then again, maybe he will be locked up, but the story doesn't suggest anything like that. For that matter, why did Ironhorse bring Cole upstate after slipping free from his bonds? 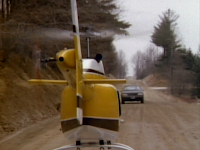 What's with the remote controlled helicopters? It seems like a silly way to wage battle, and not really in keeping with the tone of the show.

Omega Force is driving around in an early 80s American sedan. Could they really not afford to rent a jeep? It's a subtle detail, but it annoyed me so I list it here. I don't think I'm being petty, either. When I first saw the scene, I assumed that they were alien soldiers specifically because of the makeshift look to the vehicle.

What's with the alien plot? They want lasers, so they need optical equipment (which they apparently get effortlessly) and rubies. Rather than steal rubies, which 'humans value' and will be guarded, they decide they need large quantities of cash. What, cash isn't heavily guarded? And after their soldiers are killed by a helicopter piloted by Cole, what's stopping them from trying again? Our heroes never even found out what there plan was. They noticed the lenses, but that's about it. 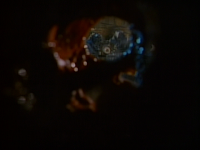 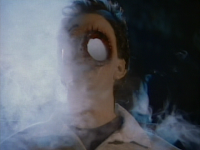 The Ugly: The aliens test their laser by boring through the heads of a living prisoner. Grotesque! Not only that, but they choose to shoot part of the scene right through the head of their victim. It doesn't get uglier than that.

So, that's Vengence Is Mine. It's a decent episode with some big plot holes. I'm willing to overlook those flaws, though, in the face of generally strong directing and acting. The emotional core of the episode is completely solid, and I think that's more important than the logic. Still, it'd be great if we could have both as we sometimes manage. War of the Worlds - The Complete First Season

is available for sale on DVD.
Posted by Jimtron at 4:52 PM

Trivia on this episode: Denis Forest and Carolyn Dunn also played opposite each other the year previous in the Friday The 13th: The Series episode "Cupid's Quiver", in which Forest was a mentally unbalanced college student obsessed with a co-ed who wanted nothing to do with him.