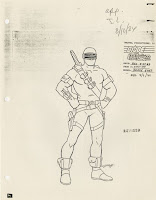 Yo Joe!  The time has come for much rejoicing and cavorting.  I can now officially announce what many of you have guessed... my next book is going to be an Ark-style book of G.I. Joe animation models, out this summer.

(Nice Snake Eyes model courtesy of a frequent contributor to the model book, Tim Finn of A Real American Book.) 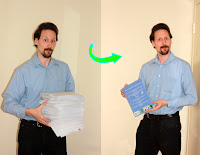 It's going to be pretty spectacular.  For some reason I've been able to find WAY more material than I have for Transformers.  As the illustration to the right jokingly illustrates, I'm going to be taking a few thousand model sheets and condensing the very best and most interesting of them down into one volume of a few hundred pages. I'm really stoked at my first work in this new and glorious arena.  I've come across some amazingly cool rare stuff, plus most of what you'd expect for a book about the Sunbow animation models. I'm still looking for more material, too, so if you're a collector of such things drop me a line.  I'm especially interested in material from the movie and the commercials beyond, as well as incidental characters.

So you see, my Roll Out Roll Call appearance is doubly fortuitous!  I can show off some early sneak-peaks of the book there.  Definitely swing by if you're in the UK. 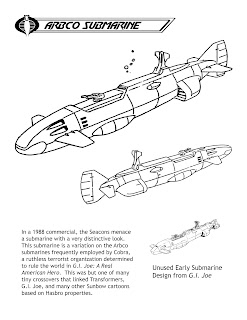 In honor of my new announcement, a very special edition of The Ark Addendum: the Arbco Submarine from the Seacons commercial.

What's Arbco, you ask?  Why, it's an anagram of Cobra, of course, one of the many legitimate fronts of that ruthless terrorist organization from G.I. Joe.  But what does that have to do with Transformers, you ask? 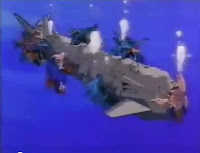 Well, you see, while I was going through Bob Budiansky's big box o' models, I came across today's addendum, a really cool looking sub.  It took me a while to figure out where it came from, the aforementioned Seacon commercial. I loved the design, but didn't have a good spot for it in any of my Ark books, so I mentally filed it away. 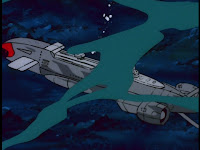 While putting together the Joe book, I cam across a very similar model, an early unused version of a Cobra submarine.  (The actual model was revised a bit, most prominently to include a giant cobra head painted on the front of the sub, and will almost certainly be in the Joe model book.)  Sure enough, the Seacons were menacing a sub from the same class of vessels that Cobra uses, seen here.  I think it's kind of neat to uncover yet another connection between the Joe-verse and Transformers-verse.

In other news, I just sent FunPub the 2nd of our Collectors' Club magazine AllSpark Almanac articles.  Derrick, Bill, and I met for dinner and hammered out what this one will be, and it should dovetail nicely with this year's BotCon theme.  I think you'll all get a kick out of it.

Here is the Seacon commercial in its entirety.

6/12/12 update - by the way, rewatching The Synthoid Conspiracy, the episode that introduces this submarine, and Destro makes a point of how shoddy the sub is compared to something he'd manufacture, so I'm calling it an Arbco Submarine instead of a MARS Industry sub.
Posted by Jimtron at 1:13 PM

This is so great Jim. I'll definitely be picking up a copy. Even though I'm a writer, I look at your books all the time when I'm designing characters for my various stories. Can't wait. Thanks!

AWESOME! :D
Might there eventually also be one for TMNT model sheets? :)

I don't know how easy it will be to find the model sheets from the 1987 Turtles series, but I adored the 2003 Turtles show and I know that they still have all their models.

I was hoping for this. Being just as popular, it stands to reason the ARAH series would get the same treatment. Any speculation on the time frame or is it too early to ask?

It'll be out this summer!

Thanks for discerning a G1-ARAH connection that post-dates the cancellation of both 'toons! Not only was '88 my favorite year of TF, but the more connections between their cartoons are uncovered, the less important "Prime Target" becomes to continuity; sweet Primus, how I hate that episode...if only the Seacons were eating that Oktober Guard sub...

And I think I'd only ever seen the version of that Seacons commercial that tacked the Triggerbots/-cons on the end. The version you embedded is better because it was essentially adapted into "Enemy Action" in the UK comics.

Can't wait to see if you found any models for the masked Joe characters' faces. An un-ski-masked Beachhead made it into an ep, and he can't have been the only one!

So what's the date for books to be on sale?

Haven't set a date yet, but definitely out this summer.

I hope this be a good book at reference.