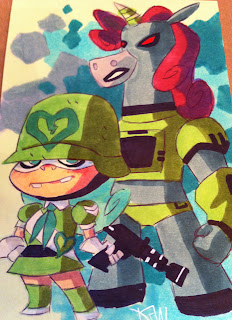 G.I. Joe sure gets around, don'tcha know!  Of all the work I've done, the stuff that gets the most love is certainly The AllSpark Almanacs, so I thought I'd do a little post showcasing all of the G.I. Joe that found its way into Animated.

First off, we've got a lovely drawing of Shattered Glass Professor Princess.  Yes, in the mirror universe, Penny Princess does use girls toys to enact her agenda, no.  There, Private Princess dresses up in boys toys, namely G.I. Joe.  Oh, and her mount is not My Little Ponies based... it draws from Battle Beasts.  Awesome.  It's drawn up by the main man Derrick Wyatt himself, and it's just barely possible that we'll be hearing more about Private Princess in the pages of the Transformers Collectors' Club Magazine.

Next up, Snake Eyes!  This model featured in Where Is Thy Sting, a third season episode of Animated, and is one of the characters in the Ninja Gladiator game.  It featured in the The AllSpark Almanac II

(order it today!) book, along with some awesome new pixilated designs from the always hilarious Walky.  One of them was another Joe model, based on the creature that lives under Castle Destro in Sins of our Fathers, though it was identified as an Inhumanoid.  Funny, that.  (Miles Mayhem, from M.A.S.K., also showed up, and I suppose technically he's a Joe villain in that V.E.N.O.M. was retroactively made a part of Cobra, but I won't count him.)

We worked some other Joe references into the book, including putting Cobra Commander on Mount Rushmore.  Mostly just name drops, such as the Mobat as an answer to a crossword question, Brekhov as a drink, the Lunartix as a threat from space, or Shockblast's serial number fit in there. 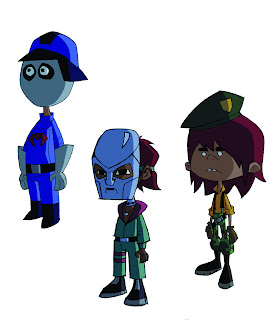 Finally, a bit of holiday cheer.  In the episode Along Came a Spider, we see many of the children of Animated dressed up for trick-or-treating.  We did a two-page spread of the costumes in the first Allspark Almanac

(order it today!), including these three familiar ones.

(Other Joe name drops in the first Almanac include Extensive Enterprises and Cold Slither, and the names of both the power plant and the prison.)

So, there you go, a brief overview of G.I. Joe in Animated.  More than you thought, eh?
Posted by Jimtron at 3:19 PM