Review: War of the Worlds, the series ep 38 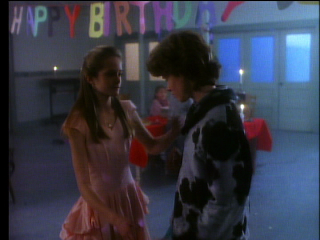 Candle in the Night is the thirty-eighth episode of War of the Worlds, the series. When the bleakness of their current situation threatens to destroy Debi's birthday, the gang scrambles to put together a last minute surprise party.  The aliens, meanwhile, deal with a runaway probe, the random wanderings of which make them destined to (almost) cross paths with the team again.  Despite a few hitches, the party goes off thanks to the Herculean efforts of all involved.

The Good: Directing.  This episode is extremely well paced, with the problem presented early and then a struggle along the way gradually being introduced to us.  While staying true to the notion of 'Almost Tomorrow', the team and some friends nevertheless manage to pull together a great party, complete with a chocolate cake, music, decorations, and presents.  The premise is so saccharin that it'd have been VERY easy for this episode to slide into self indulgence, but somehow the plot manages to rise above it.  The tone moves from despair to optimism so gradually that you almost don't notice.  Using the photo album to contrast the past to the present, and then later adding back the happy picture of this event was a shrewd move.  Overall, just a great execution on a lot of little things that make the episode a joy to watch. 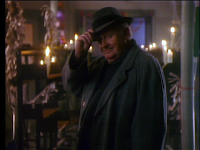 Gunther, as played by Sandy Webster.  Of all the guest stars in this episode, he shined the brightest.  His simple optimism and genuine goodness felt like a breath of fresh air amid this bleak and normally pessimistic series.  That contrast worked well here. It was ironic to have him look to the sky with hope at the end, when normally that direction leads to nothing but misery in this show.

And speaking of irony, the aliens, completely miss the point.  "What a vain notion, celebrating one's birth," muses Ardix.  "They only think of themselves, don't they," responds Malzor.  After forty minutes of watching Kincaid and all Debi's young friends work their assess off to make a great place for the party, and Harrison and Gunther manage to scrape together a cake, this assessment of the significance of Birthdays effectively underscores the difference in the alien perception of us and the reality.  These lines could easily have been spoken by the Advocacy of season one, which I also appreciated.  This scene felt very much like one of their episode post-mortems. 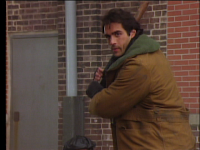 There are plenty of other great character moments in the show, especially for Kincaid.  He allows his ego to get him roped into a baseball game, a nice little vignette. Kincaid saving the twine from Debi's present was also a nice moment; they're on austerity here.  It's amusing that everyone predicted the starter motor on the Battle Wagon failing.  Oh, and there are limits to what he'll do.  When a street merchant asked five ("Hundred?" "No, thousand.") for some jewelery , Kincaid walks away.  When Nat later despairs that he doesn't have a gift for Debi, he remarks that he doesn't either.  Aside from Kincaid moments, Debi dancing with her mom was sweet, as was the general level of tension that Debi exhibited. 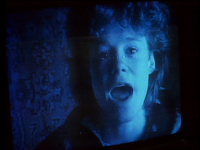 Nate, Debi's potential beau, has a nice arc himself.  He starts out the episode effortlessly lying to her over a video monitor about living in a big house, with servants and a pool.  When it starts to look like he'll be meeting her in person, he becomes visibly uncomfortable with this lie.  By the end, when the van breaks down in front of the library where he was living, he faces his fear and tells her the truth.  Naturally, she forgives him.  Ah, young puppy love.

Oh, and the idea of living your social life primarily through an online presence seems very ahead of its time for 1990.  Nice to see the series get one right. 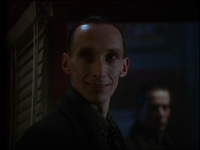 The aliens get in a few good moments as well, naturally.  Mana's casual arrogance about the success of the probe turns quickly to panic when it malfunctions.  Forest give a great understated reaction to that.  Ardix, later, is out of breath chasing the probe, an amusing bit.  Finally, when Gunther observes that Ardix isn't from around here, his "No.  Not quite." and plastic smile is priceless.

The Bad: Coincidence, though absent this coincidence we'd lose our chance to see the alien reaction to the events of the episode that was oh so delightful. 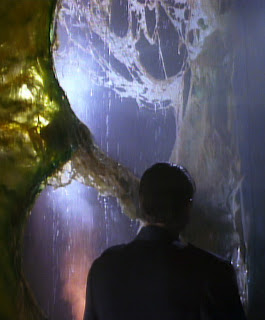 The Ugly: Nothing, really, but why not go with the nicely broken down alien base shot at the end.  The alien organic technology in this season is always a bit ugly.

I'll bet you thought that I'd hate this episode, huh interwebs?  Well, nope, not at all.  It's actually one of my favorites of the season.  After three quarters of a season of misery and hopelessness, it's nice to see our heroes hit a home run.  The pacing is nice, which is important given the almost complete lack of action in this episode.  The characters all feel true to themselves, and I found myself rooting hard for the party to be a success.  All in all, it's a good story, better than the sum of its parts.   War of the Worlds: The Final Season

, is available for purchase on DVD.
Posted by Jimtron at 12:49 PM

This is the only episode I've ever seen, and I often wondered what the series was generally like as this was much more interesting than I expected.

Based on your reviews (which I enjoy) I don't feel I've missed too much and I'm glad you liked this one - I always thought it might be a divisive instalment.

Yeah, I'm one of those who cannot believe you actually enjoyed this episode. I hated it. It didn't feel like War of the Worlds at all. It could've been inserted into any television series really. The only good parts involved the aliens, as usual, and Ardix is of course wonderful. Honestly though, this episode was a total waste of an hour for me, especially since Debbi has never been a particularly strong or appealing character, at least to me. To waste a whole episode on her is very tiresome. This wasn't the first time an episode has been devoted to her, and unfortunately it won't be the last.

I can understand why you liked this episode. I remember it being one of the few episodes that I liked when I first saw the second season as a kid. And upon repeated viewings, I still like what was done with the episode.

I do find it a bit to swallow that Suzanne McCullough, a microbiologist who can follow lab procedures, is unable to bake a cake (or read a recipe). I find that revelation hard to believe.

I think what I enjoy about this episode the most is the fact that there seems to be something worth fighting for. I liked the optimism this episode had. The baseball game with Kincaid was pretty well done as well.

I agree in regards to the character of Gunther. A character like that is a breath of fresh air in this dystopian series. I did worry that he was going to meet his end when he came across Ardix, but thankfully, he did not.

I also did enjoy the scenes with aliens. Ardix's forced smile was probably my favorite moment- although I did enjoy watching Malzor's snide comments to Mana after the probe was lost. He really does love to turn the knife when she screws up.

Speaking of the alien probe, it reminds me (at least visually) of Control, the alien probation officer that appeared on "Hard Time On Planet Earth".

I will confess, I shared a horrible suspicion that Ardix was going to do in Gunther and was quite relieved when that turned out not to be the case. I'm sure that the first season aliens would have ripped them to shreds.

against all expectations for what an episode like this should do to a series like this... it's an absolute stand-out episode... specifically BECAUSE it is what it is within the series it exists in. this is one of the major successes of the Macuso claim to desire to humanize the series and make it more about people than plots.

really, look at the entirety of WOTW seasons one and two and look at this one in comparison for violence content. not only does not one person or alien die, not one is injured. there's zero violence. in a way, the expectations of conflict and violence lead to this story having some palpably tense moments like the one where we all thought Gunther was going to get killed. if this had been The New Outer Limits, it would have been the defacto ending to force us into a sad, miserable "ain't that terrible!" kind of ending where it really was unneccessary (i have a massively detailed hate-review of that series in me if i ever get past my laziness... i wanna tear that thing to shreds for the crimes against story-telling and audience intelligence - and science fiction - that show commits).

this episode was very clearly about the psychological differences between the protagonists and antagonists. it brings "otherness" to the forefront at just the right time and, as mentioned by The Sultan of Sarcasm, a demonstration that there is a reason to go on and that not everyone and everything is lost to bitterness and decay.

lastly, this episode does something that fans of series like Farscape and Stargate SG-1 have actively ASKED for: an episode where the characters just go about an otherwise NORMAL existence instead of some death-defying crisis or conflict. it's a breather and a pause. something totally underdone in such conflict-driven shows as a science fiction drama/horror.

Something to watch for in this episode - when Kincaid is playing baseball with the teenagers, there is a barrel the background that clearly has " Classified 1951-1953" stamped on it. Anyone who is a fan of the 1st season knows that within the barrels with that stamp on it are the Aliens from the 1953 invasion, some of which were revived in S1. If you watch this season closely, those barrels are everywhere. When originally broadcast, I was convinced they would play a role later in the series. Sadly, they did not.

The music in this episode, while not intense like in the Terminal Rock episode, was VERY 1980's sitcom. It's one of the few things in this season that really dates it to a specific era.