Review: War of the Worlds, the series ep 37 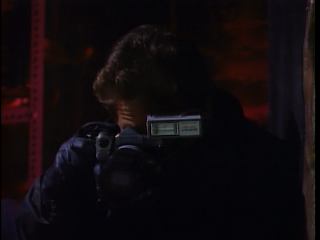 Path of Lies is the thirty-seventh episode of War of the Worlds, the series.  In it, the aliens use their medical tech to buy influence with Mr. Samuals, a frail business and publishing magnate.  At the same time, reporter Mark Trainer has twigged to their existence and becomes their prey.  The team attempts to keep him safe and unravel the web (or path) of lies, but sadly for them the aliens keep their foothold and the reporter has to go on the run.

The Good: Unsurprisingly, the alien interaction remains a high point.  Mana admits to a 'slight miscalculation' in a syrum to keep Mr. Samuals young and healthy, prompting a terrific understated reaction from Malzor.  Later, she chastises him for allowing Samuals to gain the upper hand during negotiations. (I also liked that Samuals first instinct upon figuring out what the aliens were was to cut off contact.  Finally, someone sensible.) 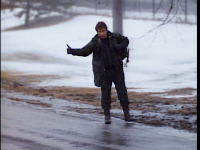 I always like a solid win for the aliens, and this episode certainly counts. The negatives are destroyed, Trainer goes into hiding with his boss and girlfriend dead, and the aliens solidify their influence in the business and political realm.  Oddly, the alien tasked to eliminate Trainer is namechecked, 'Salo.'  That seems familiar; have we heard it before?  (Sultan of Sarcasm, I'm looking at you.)

I enjoy the aliases.  Mr. Malcom is back, and now Ardix (Huzza for his return) is calling himself Dr. Adelson. Kincaid trots out "John Wolf" again, though now Harrison is "Harry Porter."    Little touches like that are fun. 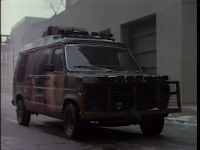 Solid action this episode, with a few good firefights sprinkled in.  Though, I wonder why the aliens are using conventional weapons and not their Brussels sprout cannons.  Naturally, this means we see more of the battle wagon I love so much.

The aliens are leaning on Samuals for, among other things, use of a telecommunication satellite.  We never see what this is all about, and I like that.  Malzor must have some schemes that go off in the background, without a ton of drama.  Maybe this is one of them.

The Bad: The episode suffers from having a few too many characters.  The reporter plot and the Samuals plot are connected, but not as strongly as they could be.  Each one features a small cast of supporting characters, and then there are our main heroes and villains to juggle.  Trainer and Samuals wind up the stars, with everyone else relegated to a secondary role.  I think this one could have been streamlined quite a bit in the outline phase.  Trainer and his girlfriend and editor and publisher, Samuals and his traitorous butler, it's all a bit much. 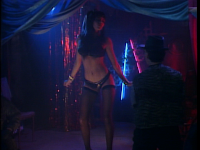 A frequent sin of this show, coincidence, is as bad as ever.  The only reason our heroes get involved is because Trainer walks into Plato's, the gang's favorite strip joint.  I've decided that I like that the gang hangs out here.  Maybe I'm just prurient, I dunno.

The dystopian future seems more ill-defined than usual this time out.  When Trainer shows his editor the photos, he replies "maybe it's just a military robot or security cyborg that got loose."  Excuse me?  We've had no hint of ANYTHING like this before.  Also, The Midtown Herald is called the last surviving newspaper in the state.  That's not as much of a stretch, but it's still a big leap from the journalistic misadventures of Cash McCullough in My Soul to Keep.

Speaking of the McCulloughs, Suzanne has nothing to do in this episode.  I mean, nothing.  And it's been a while since we've seen Debi, though that changes next week. 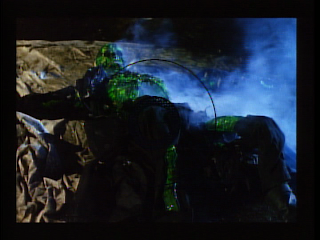 The Ugly: Just an alien corpse, though it winds up on film and becomes the focus of the episode.

This is one of the weaker season two offerings.  Despite the well executed action, it failed to hold my interest.  The alien goal was much less threatening than usual, just keeping their own existence secret, so the stakes felt low.  That wouldn't have been so bad if we cared more about the characters, but the proliferation of them meant that that was difficult. It's a fairly typical plot, perhaps a dash more pessimistic than usual, but the execution could have been much stronger.  War of the Worlds: The Final Season, is available  for purchase on DVD.
Posted by Jimtron at 11:42 AM

Excellent review of the episode. I think this episode had a ton of potential that just never quite came together. It's funny that you mentioned Cash McCullough in your review. I thought it would have been potentially more interesting to have Cash be the one who was interfering with the Morthren operations.

I also enjoyed the alien interaction in this outing, with Malzor being especially snarky towards Mana (the "You were busy" line is a personal favorite). It was also nice to see Ardix back again. I think there is a certain creepiness that Julian Richings brought to the character.

I do agree that the episode suffered from too many characters being thrown in.

Now, I don't remember the character of Sala being mentioned beforehand (I know the first season aliens were referred by rank, and I don't seem to recall this particular alien. There was Sol from "Terminal Rock" who was killed towards the end of the episode).

Not using Cash in this episode was definitely a missed opportunity. It would have tied the episodes more strongly to our heroes emotionally while avoiding coincidence. Perhaps this is just wishful thinking on my part, but my instinct is that it would also focus the episode.

I was probably thinking of Sol. It still seemed slightly odd, in an episode brimming with characters, that a new alien soldier would be named in the episode and billed in the credits.

Also, I wonder why the team keeps returning to Plato's Bar. Why would they keep returning to the source of so many calamities? A better question is, how is that establishment still open? Well, it won't be the last time that Plato's Bar brings chaos this season.

I'm surprised at you Jimtron. You didn't mention the huge glaring inconsistency in this episode that was so prevalent in "My Soul to Keep", which is the fact that once again, no one believes in the existence of aliens!

I do agree with you and Sultan--it was very nice to see Ardix again. Out of all the new aliens, he's my favorite, simply because he is so creepy, and Richings does a wonderful job with him. I don't want to give anything away, but suffice it to say I was really disappointed with Ardix in the series finale. Thankfully you're almost there in your reviews Jimtron, since I, like many other fans I'm sure, have lots to say about that one!

the only thing i have to add is a repeat of the cheapness inherent in not using convincing physical and audio effects for gunfire. the scene in the office where the editor(?) falls unconvincingly forward into the outer office-space through a glass window while being shot by human gunfire at the same exact moment... it's like stage acting with sugar glass to make it look better... it still looks horribly contrived and poorly executed by all parties (that specific gun shot sound is the one i hate the most and tv shows continue to use it over and over... i wish foley and special sound would have expiration dates so we didn't have to be yanked out of our suspension of disbelief by super-familiar sounds that attach themselves to other shows' events entirely...). then again, this seems to be a TALENT of mine, since i've NEVER encountered anyone talking about this topic anywhere in life on on the web.

for example... are there other people out there who recognize a very specific sound effects library for "scifi" and "tech" stuff that has clearly done the rounds in full use from shows like 24, Stargate (not as badly), games like StarCraft (where i first heard many of these sounds like hydraulics and doors and beeps)... the harddrive clickity noises in 24's CTU office are the same ones used on the bridge of the new Battle Star Galactica... etc... i don't know which library it is, but i know it circulates and it IS a library because when i hear one of these sounds, and will and DO hear at least two more associated sounds.

There's a scene in this episode where the reporter is on the street looking at a newspaper. On the front page there is an article about Crevulax profits soaring. With everything else going on in this episode it's nice to see care taken in little background details.

I never noticed that! Could you post a screencapture, or perhaps a time reference?