A conversation on #wiigii! (a Tranformers IRC channel) made me realize that some of the extended biographies, written by Bob Budiansky back in the day, have yet to be published.  Bob generally wrote out long bios for each character, then truncated them for the tech specs.  The longer versions, along with character models, made up the basis of the excellent Transformers Universe profile book.  Personally, I find it a real treat to read these entries for characters who didn't make it into Transformers Universe.

So, by the request of said #wiigii!-ites, here are a few that haven't yet seen the light of day (I don't think, anyway.) The odd parsing of some of the names is from the originals, it's not something I've introduced.  BTW, I had Whirl's extended bio in my hands... but somehow saved over it with Roadbuster's bios.  The original went to Japan, and so far hasn't turned up again.  Sorry, Transfandom.  But at least you can enjoy Swerve, Hubcap, Ransack, Chop Shop, Venom, Barrage. 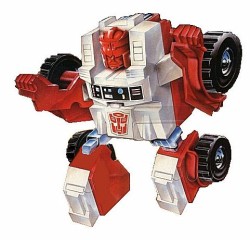 Swerve
Profile: If Autobots needed driver's licenses, Swerve's would have long been revoked. He's a definite menace on the highways. He doesn't mean to be, but he is so easily distracted that he rarely pays attention to where he's going for more than a half-minute at a time. Usually, he's too busy reading roadside billboards, changing his internal radio from the inter-Autobot frequency to a disco station, or looking for vanity license plates. It takes the frenzied honking of a nearby car's horn or the sudden approach of a telephone pole toward his front end to rouse Swerve from his stupor and save him from wrecking himself -- and, often, others as well. Although a loyal and brave Autobot, Swerve exhibits the same lack of concentration when being given orders by a superior. Invariably, his mind wanders and he only hears part of his instructions. It is not uncommon to hear Optimus Prime advising Swerve to "Keep your optical sensors on the road -- and your cerebro-circuitry on the plan!"
Abilities: Sensors in Swerve's hands allow him to determine a multitude of chemical and physical properties of metals: electrical and heat conductivity, melting point, tensile strength, coefficient of elasticity, ductility, brittleness, magnetism, and others. Miniature acetylene torches and lasers in his fingers allow him to fuse metals together into new alloys. Swerve is constantly trying to create stronger and lighter metals for use by the Autobots. In vehicle mode, Swerve can reach speeds of 120 mph and has a range of 500 miles.  Considering his careless driving habits, he luckily is extremely resistant to damage.
Weaknesses: Swerve's frequent lapses of concentration result in many accidents no one of which is usually severe. But the accrued effect of all of them often leaves him a walking (or driving) wreck. 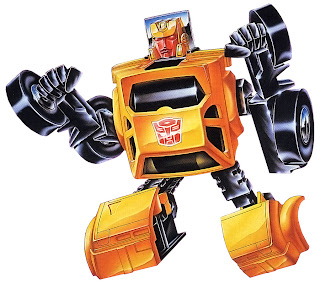 Profile: Hub Cap has everybody's friendship but nobody's trust. He is affable, witty, generous, even charming -- it is no wonder that his fellow Autobots find him such pleasant company. But he's also a con artist. He is likely to enthusiastically accept some work detail one moment and then try to sucker someone else into doing it the next. Or he might try to smooth talk a comrade into trading his weapon for an inferior one. Hub Cap is surprisingly effective at his scams. Perhaps it's the smiling, sincere way he talks or perhaps it's because he looks small and unthreatening. Whatever the case, Hub Cap is living proof of the old Cybertronian adage, "You can't tell an Autobot by it's finish."


Abilities: Not only is Hub Cap adept at speaking, he's even better at listening. Equipment within his head module allows him to receive a broad spectrum of electromagnetic signals -- AM and FM radio, shortwave, UHF and VHF television broadcasts. He uses his phosphorescent windshield as a television screen when receiving TV signals. Amplifying circuits allow him to detect signals as weak as .000001 watts. His audio circuitry can hear a pin drop 500 yards away, and has a frequency range of 5 to 50,000 Hertz. In car mode, he can travel up to 90 mph and has a range of 1000 miles.


Weaknesses: Hub Cap is physically among the weakest of the Autobots. Even low-speed crashes can result in severe damage to his body. 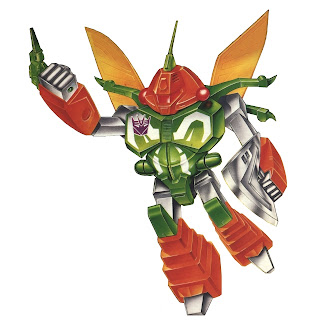 Venom
Profile:  Venom will use his poisonous talents even on his fellow Decepticons at times. This is because Venom trusts no one. least of all his fellow Insecticons, any of whom, he feels, might be tempted to usurp his role as Insecticon Leader. What little self-esteem Venom has he draws from this title. So nervous is he about losing it that his behavior borders on paranoia: he would rather try to eliminate a comrade he barely suspects of coveting his position than risk letting him live. Some Decepticons say disparagingly that Venom would be better off if he were captured by the Autobots -- at least he would no longer have his fellow Decepticons to worry about.
Abilities:  The stinger mounted on Venom's head can discharge a variety of fluids harmful to both mechanical and organic life: acids that break down metal alloys, catalysts that alter molecular structures, toxins that paralyze human nervous systems, and several others. The stinger itself can penetrate ¼-inch steel. In insect form, Venom can fly 15 mph with a range of 300 miles. In robot form, he carries an electric-blaster gun, powerful enough to short-circuit a tank.
Weaknesses:   Being as suspicious as he is, Venom has few friends, and fewer still who will come to his aid in times of trouble. His stinger often gets stuck, in his target, which sometimes leads, to it breaking off. 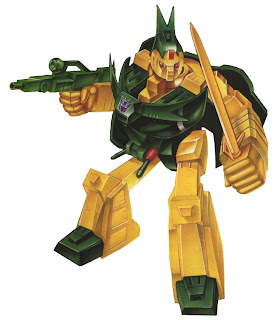 Barrage
Profile:  Only when the ground is scorched and leveled does Barrage cease his onslaught in a battle; merely winning is not enough to satisfy this Insecticon. He wallows joyously in the misery and ruin he causes. Merciless and cruel, he believes kindness only stirs hope in the hearts of the vanquished. So thoroughly rotten is Barrage's mechanical soul that even his fellow Decepticons consider him, on a personal level, very unpleasant company. On performing his function, however, they have nothing but praise and envy: Barrage encompasses all the worst qualities that symbolize the Decepticons.
Abilities:  In insect mode, Barrage can unleash a nearly non-stop torrent of explosive charges from the gun-mounts in his eyes. His antenna module can shoot discreet packets of high-energy photons; each packet can blanket a 100 sq. ft. area with a temperature of 3000 degrees for 30 seconds. He can fly 15 mph with a range of 400 miles. In robot mode he uses a sonic rifle, which can flatten a small brick building at a distance of 600 yards with the vibrations it produces.
Weaknesses:  Being virtually totally offensive-minded,  Barrage often leaves himself exposed to counterattacks. 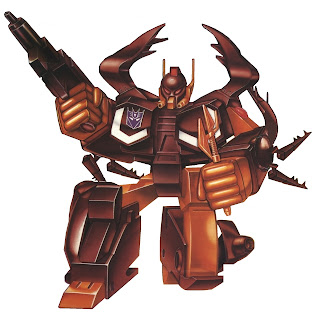 Chop Shop
Profile:  Nothing that isn't bolted to the ground is safe from Chopshop's greedy grasp. He can carve up a moving bus and haul away its engine block before it rolls to a stop. And he can do all this while at his small insect size. Easily the sneakiest of the Insecticons, Chopshop prides himself on his subtle talents. No challenge is too great for him: the more difficult it is to steal something, the more he wants to steal it. Once he targets an object, it's as good as gone. And once he has it he will disassemble and reshape it with the consummate skill of a brain surgeon to fit it to Decepticon needs. Chopshop sums up his philosophy this way: "I take no prisoners, just spare parts."
Abilities:  In insect mode, Chopshop has two small jets on his back that allow him to fly in near silence at 30 mph. His range is 250 miles. His pincer-like antennae can slice through two-inch thick vanadium-steel plate. He can also use twin pinpoint lasers that protrude from his mouth assembly to carve up objects that require more precision. He can lift up to 30 tons with his six clawed legs, even while insect-size.  He can operate as an insect at either insect or normal size. As a robot he carries a high-powered photon cannon which can blind as well as blast opponents.
Weaknesses: His tremendous ego sometimes leads him to taking on a challenge that is too great for him, resulting in his eventual defeat. Frequent mechanical breakdowns in his legs are a result of his carrying off heavy objects during his burglary operations. 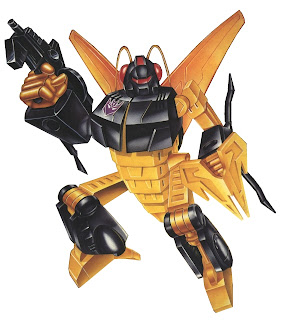 Ransack
Profile:  With a fury unchecked by concern for the safety of innocents, Ransack enters into a battle like a howling tornado. If necessary, he will level an entire town to hunt down an enemy. The destruction and misery he leaves in his wake only serve to spur his manic cravings for more. Truly, he is one Insecticon whose mechanical heart is as cold as his metal hide. Among his fellow Decepticons he is known as a tough-talking, straight-to-the-point soldier who is always looking forward to the next conflagration. His comrades have the utmost confidence in his abilities to wage war--but they know enough to let him lead the way since Ransack won't take the time to shoot around them.
­Abilities:  Ransack can operate at normal size or shrink down to insect size when he's in his insect mode. His abilities are the same either way except he can leap 200 feet at insect size and 1.5 miles at normal size. A kick from his rear legs packs enough power to knock over a bulldozer and shatter a foot-thick steel vault. The vibrations produced by rubbing these legs against his tail assembly can crumble a brick wall. His antennae can shoot 80 Kilovolt electrical charges. In robot mode he carries a high-intensity concussion blaster gun. Each of his arms has two razor-sharp talons mounted on it which he can spin at 300 rpm and use as a buzzsaw.
Weaknesses:  Ransack's rear legs are susceptible to complete mechanical failure if any foreign matter gets into their joints.
Posted by Jimtron at 11:09 AM

Awesome! It's great to get these after so long. I'd love to see extended bios for Reflector (which I think may not exist) and Whirl (which should if RB does).

If you come across any more I'm beggin', ab-so-smurfly beggin' you to post then. Most of the Terrorcons, Scorponok, and Wingspan remain among the missing.

These are really nice, I'd love to see a book with these extended bios and the full box art. That would be a book I'd buy and read with enthusiasm..

This is awesome (still crossing fingers for Whirl's to pop back up).

Along with the ones that MiryClay mentioned, I also remember you posting those of the Omnibots a while back. Were there ever ones for Reflector or Powerdasher(s)?

MiryClay, if I come across more and am at liberty to share them, you can bet I will.

Carcass, I didn't see anything like that in either the Marvel Comics Bible nor in Bob's Big Box, though it's conceivable he had it and I didn't notice. It's possible they don't exist, especially the Powerdasher one.

Thanks so much for sharing these, Jim.

It did indeed seem that only half of the second volume of TFU bios got printed in the back pages of the later Marvel comics. Those that were _not_ printed include Bomb-Burst, Bugly, Cloudburst, Doublecross, Finback, Flywheels, Groundbreaker, Hun-Grrr, Iguanus, Rippersnapper, Scorponok, Sinnertwin, Sky High, Splashdown, Submarauder, Waverider and Wingspan.

These bios almost certainly must have been written, because they _did_ print bios for the likes of Battletrap, Blot, Cutthroat, Fortress Maximus, Grotusque, Landmine, Repugnus and Skullgrin.

So please shout if you find any more of those unpublished ones!

Cool stuff. Now if only we could unearth some animation models from these characters.