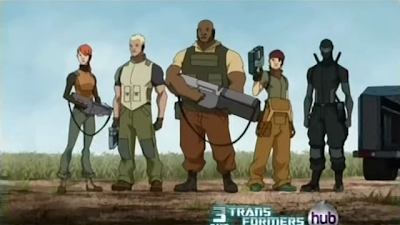 So, Hasbro launched their new network with the Discovery Channel, The Hub.  This means that we get a plethora of new cartoons, and some old favorites mixed back into the broadcast schedule.  Today I wanted to share my thoughts on G.I. Joe: Renegades.

Renegades is a very fresh take on the traditional G.I. Joe mythology.  While keeping many of the same characters and much of the basic imagery of the old Real American Hero version of the Joes, the story has been updated to be, if not more plausible, at least less absurd.  The short version is that a small team of heroes has stumbled onto the fact that Cobra Industries is really quite sinister, and gets branded as outlaws for their trouble.  This removes one of the main issues I've always had with the Joe mythology; namely, it's hard for me to imagine ANY force standing up against the U.S. Army, let alone some kind of non-governmental terrorist organization acting within United States borders.  By re-framing the conflict as they did, we get a more reasonable series of conflicts that's more resonant with 21st century life. Evil corporations are nothing new, in fiction or in real life, but after the wave of bank bailouts and financial scams and oil disasters, it's not so hard to imagine one bent on world domination.  Cobra Industries feels right to me.

That the mythology should be reimagined in this way is not at all surprising.  After all, Marty Isenberg is one of the show developers and story editors.  He was the head writer of Transformers Animated, and one of the key architects who build that brilliantly re-imagined iteration of the Transformers story.  Renegades, too, feels new and updated and modern, and yet not out of step with the emotional core of what went before.  Take a look at this video, the very first thirty seconds or so of the first episode:

Yeah, it's pretty nifty all right.  As someone who grew up with the Real American Hero version of the show, nods like this make me break out in a huge grin.  Renegades airs Saturdays at 3:00 on The Hub.  Check it out; you'll be glad you did.
Posted by Jimtron at 9:56 AM

Nice review of Renegades, Jim. I happened to catch this show (along with Transformers Prime) and I really am enjoying this revamping of the G.I. Joe mythology.

I like the idea of this small group of rogue soldiers that are on the run. And I also think the idea to change Cobra into an evil corporation is the right one. I used to always wonder how Cobra could have possibly survived as an organization (and also I wondered about their funding). Since Cobra controls the world of pharmaceuticals and military defense- means that they already have clear power and influence. It makes the struggle with these renegades all the more compelling.

I know the next episode is a Snake Eyes oriented one, which makes me feel that Storm Shadow will be included in there somewhere. It's very interesting to see these rogue soldiers encounter future members of the G.I. Joe team. And the revamp of Cobra Commander is bad-ass (I like the fact that no one- including the Baroness has seen his true face).