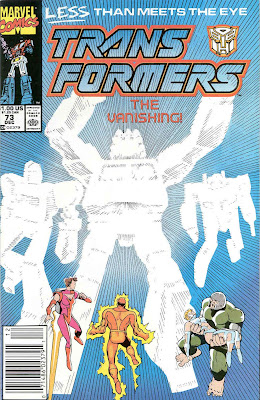 The seventy-third issue of the US G1 Marvel Comics run of Transformers is titled Out of Time!  For the fourth issue in a row, the creative lineup is unchanged, contributing to the strength and momentum of the story.  For those keeping score, that makes this a Furman (writer) / Wildman (penciler) / Baskerville (inker) / Yomtov (colorist) / Parker (letter) production.  The cover, too, is an Andy Wildman.

The cover is rather intriguing.  Optimus Prime, Scorponok and Shockwave appear to be in the process of vanishing, as they stand before the Neo-Knights.  LESS than Meets the Eye is written above the logo, which is itself transparent.  "The Vanishing!" is written.  All of the lines drew your eye inevitably to Optimus Prime, front and center, making it a very effective piece.   The coloring, too, is very effective, with the Neo-Knights popping much more than they would otherwise.  The sum of all these parts is a very strong cover.  If there's a criticism to be had, it's that perhaps it gives away too much, but then the idea of a 'vanishing' is so abruptly different than anything that we've been building to that this serves to pique rather than to spoil.

Once again, the issue manages to live up to the promise of the cover.  We open on a beautiful close-up of Galvatron, barking orders against some lovely Furman prose. I'm just a bit surprised that they put the logo on this page, rather than the next as a part of the narration, though this way works fine too.  It seems that Xaaron and Galvatron have made the journey to Primus' slumbering form, where Xaaron prays and Galvatron rages.  Galvatron worries that Hook, Line, and Sinker will be coming for him soon, and he's right to be concerned.  Unicron is closing in on Cybertron, having ignored the planet Jhi in a fun vignette, and dispatches his minions to find Galvatron and thwart whatever treachery he might be planning.  They stop menacing the Autobot Targetmasters and plunge into Cybertron's core to find their prey...

The opening sequence works well, picking up where the Galvatron/Xaaron plot left off while delaying the expected confrontation between the Neo Knights and the Transformers by just a few more pages.  Galvatron's frustration and mad lashings out are well done, especially him pacing about and smashing the wall.  Meanwhile, Xaaron is beautifully desperate in his supplication.  Meanwhile, Unicron's ambition and greed resulting in him sparing a world was a nice bit of cosmic irony.  By the time we cut back to the main action, all we want is to see Galvatron fight the trio of minions.  The tension continues to build.  Bravo, Furman, bravo. 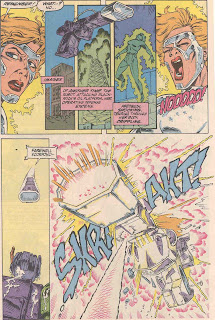 Following a one-page summary of recent events on Earth, we get to see some superhero action as Thunderpunch and Dynamo (Hector Dialonzo), Rapture and Circuit-Breaker, square off against Scorponok.  Optimus realizes that he might have to defend Scorponok from these humans as Shockwave realizes that Circuit-Breaker poses a threat to him and resolves to kill her after she cripples Scorponok. When he shoots her, naturally Nightbeat takes the blame, and things go from bad to worse.  Across the river, Mindwipe manages to hypnotize Soundwave, Scorponok's second in command. He sees victory for his rebel Decepticons for a fleeting instant, before the Autobots put their guns to his head.  They're going to salvage the alliance any way they can.  They'd best hurry, though, as Nightbeat is down and Optimus is rapidly weakening under the ministrations of Circuit-Breaker.  Blackrock begs her to stop, then commands the others to stop her.  Thunderpunch won't side with robots against a human, though, even if they are Autobots.  All seems darkest until Shockwave converts to his space gun mode to destroy Scorponok.  Blackrock instantly recognizes it as the form that crippled Josie way back in issue #6.  He shouts for her to look, and she does.Her reaction is beautiful, and the shot of her unleashing on Shockwave, sixty-seven issues in coming, is priceless.  The coloring, inking, lettering, pencilling... everything just works so well.  Spent, Circuit Breaker plummets to Earth, but Thunderpunch jumps up to catch her.  Contrasting this is Shockwave's fall, a fall which Scorponok watches with grim satisfaction.  He turns back to the humans, but Optimus challenges both sides to stop.  The civil war is over, and the alliance is in tact.  Perhaps things are looking up for our heroes?

On Cybertron, though, things seem dark.  Hook, Line, and Sinker have arrived.  Galvatron is tired of cowering, and squares off against his opponents with savage fury.  He skillfully disarms Line, then dispatches him using Sinker's own weapons.  Sinker, too, he blasts apart, though Hook gets the drop on him.  Before Galvatron can be destroyed, though, Primus has awakened!  Using the body of Emirate Xaaron as an avatar, the god effortlessly destroys the dark creation tainting his presence.  Galvatron pours on the charm, beseaching Primus to bring the scattered children of Cybertron home.  Looking at the Decepticon symbol adorning his supplicant, Primus agrees, leaving a smirking Galvatron to muse that even Gods can be conned.  No doubt he's got some experience in that department.  On Earth, we finally find out what the cover is all about as robot after robot vanishes, summoned home by their creator.  Nightbeat's damaged form is in contact with the helicopter of the Neo Knights, and so they too are teleported away.

We seem to be rapidly approaching the endgame, with the Earth plotlines resolved and the Cybertron plotline about to blossom.  There's one more page, though, and Furman uses it to pull in yet another unresolved thread from the past.  The Creation Matrix has come back online, thirsting for revenge.  It hovers over the mangled form of Thunderwing, and we realize that that tale is not yet fully told.  When I first read it I turned the page, expecting Thunderwing too to vanish, having not quite grasped the mechanics of how Primus' teleport worked.  (As it turns out, he only grabbed the Transformers on Earth.)

And that's it!  20 pages just flies by when the storytelling is this strong.  Furman is knocking down pins set up by Budiansky years earlier, as well as providing payoff for his own stories and weaving in threads like the Matrix Quest that had been lying dormant.  He's supported by consistently strong artwork. Anyone who knows comics must realize that #75 will be a big event, and now we're just one issue away.  Many fans, myself among them, consider this entire storyline to be one of the all-time high points of the Transformers, and it's easy to see why.  The emotional resonance of characters like Optimus and Galvatron, Scorponok and Shockwave and Circuit Breaker, is so strong that each of their intertwined fates looms so much larger in the imagination than they have any right to.

No teasers for next month.  Maybe Furman didn't think they were needed.  Maybe he was right.  Out of Time! is available in IDW Publishing's  Classic Transformers, Vol. 5

(As it turns out, he only grabbed the Transformers on Earth.)

This is, perhaps, my only complaint with this issue (I also remember fondly how Furman used the continuity of issue #6 re: Shockwave and Circuit Breaker). Not only were the "mechanics" of Furman's Transformer-transport unclear in this issue, but it really doesn't make any sense why only the Transformers on Earth (and only those gathered in a single large group, at that) should be gathered.

(If one wanted to bring in future continuity on this, we'd also have to come up with an explanation as to why the Generation Two Cybertronians seem not to be affected.)

It's definitely a weakness. You can paper over it with fan explanations, but it remains a flaw.

As an exercise, let's fansplain:

As for missing guys on Earth... only Spike was missed, and I can pretty easily imagine that he didn't qualify as a Transformer to Primus.

For the rest... hmmm... bodies in stasis didn't have an active life essence in any meaningful sense, so they got left behind. Grimlock and the Dinobots, corrupted by nucleon. Thunderwing, tainted by the evil matrix and offline to boot. The G2 Cybertronians (and the swarm as well), perhaps too far mutated away from what constitutes being a Transformer, their life essence too diluted.

Or, alternatively, Primus just didn't know about them. His senses didn't extend that far. Galvatron presumably pointed the way to Earth, so perhaps with limited senses that's all Primus saw.

You mentioning the G2 Cybertronians brings up an old thought I had. When reading 75, the assembled might of all the Cybertronians seemed kind of pathetic against Unicron. However... imagine the vast fleets of Jhiaxius' Empire going to war with the Chaos Bringer! That seems like it might actually be a fair fight.

This is perhaps Transformers at its very best, rivaling anything before or since.

As for the teleportation thing, it seems as though they hinted in the later issues-- I think after Xaaron is blasted, or with the Neo Knights' presence-- that Primus had some idea of how things would go down.

That said, Thunderwing and Grimlock's party may have been deliberate moves, pieces left on the sidelines to enter the game later to affect the battle in ways they might not have had they all been brought in together.

Jim wrote:
"imagine the vast fleets of Jhiaxius' Empire going to war with the Chaos Bringer! That seems like it might actually be a fair fight."

I remember a UK fanfic which was quite good, and offered a proper ending to the G2 saga. It involved Unicron (form another timeline I think) fighting the fleets of the Leige Maximo, and ultimately consuming the Hub, planet by planet (as the hub is built out of seperate planets linked by Cybertronian material). Real cool :)