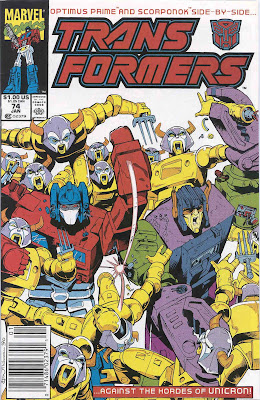 The Void! is the seventy-fourth issue of the US G1 Marvel Comics run of Transformers.  For the fifth issue in a row, it is brought to us by Furman (script), Wildman (pencils), Baskerville (inks), Yomtov (colors), and Parker (letters).  Editor and editor-in-chief Rob Tokar and Tom DeFalco are credited as 'nobody' and 'nothing,' respectively.  The cover is by Wildman and Baskerville.

The cover features Optimus Prime and Scorponok, side-by-side gainst the hordes of Unicron.  It says so itself!  Still sporting the damages they've sustained from issues 70-73, they face off against a swarm of robots wearing Unicron masks.  The alliance is intact, it would seem.  For some reason this cover fails to excite me.  I feel like it should, it's well rendered and the idea of the alliance facing off against minions of Unicron feels right and natural.  I can't put my finger on my issue with it.  Perhaps it's just not as brilliant as the rest of the book, or perhaps it's the odd white background.  Maybe it's that the cover fails to surprise; it is rather expected, in a way.

The book itself opens in a rather unexpected way.  We get a full page of almost nothing, with Unicron curled up in the center.  The title of the book is incorporated into the narrative, which I always like.  We then cut to a two-page spread of the Primus-possessed-Xaaron going over the Transformers' creation myth, which leads into a two-page spread of the assembled Transformers, complete with logo.  It's really very well done.  It's been a while, well over a year, since we were introduced to the idea of Primus and Unicron, so it's nice to see it reviewed here right in time for the big finale.  What a motley crew populates the book!

After Primus names Optimus Prime the his champion, we cut to Grimlock on board the Ark.  Some seeds are planted for the future (Snarl detects only one Cybertronian life form on Earth, and that one's in two parts... fascinating!), Grimlock's hand locks up again, and the Dinobots pump Nucleon into the life support bays without stopping to see who they're reviving.  No harm could possibly come of that, now, could it? I love how dense these two pages are.  Grimlock's motivation, to prove to Prime that he was right and Prime was wrong, continues to be compelling.  It seems to me that it stems, at least in part, from Grimlock's time as leader.  How frustrating it must be for him to have his reign end in failure, to have to turn the reins back to his predecessor.  He's so proud; surely on some level he wants the Autobots to say that they choose him, not Optimus.  These themes will be explored more in upcoming issues, but they certainly make for compelling reading. 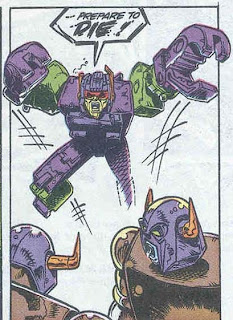 On Cybertron, Blackrock begs Prime to have Primus send them back to Earth.  Circuit Breaker isn't doing too well on a planet full of robots.  Primus, though, is shut down, filling Optimus with misgivings.  Scorponok, too, is worried about the future.  After Starscream and Shockwave threaten him, he asks Prime to walk with him to strategize.  Instead, though, he confesses his fear to his sworn enemy.  He, a man, just doesn't want to die.  Perhaps that's one of the reasons that Zarak bonded with Scorpnok; it must offer a sort of immortality.  Optimus, having experienced death, is in no hurry to die either.  It makes him feel selfish, but he resolves to face death with nobility and resolve, should he have no other choice.  Scorponok is touched by his example, but his resolution to fight together is interrupted by Unicron cultists.  They're hunting Optimus, though, and not him.  He has a moment of weakness, when he contemplates leaving Optimus to his fate, but ultimately leaps (quite literally) into battle.  It's a lovely panel, no?  It's also great character development on his part.  Scorponok is coming a long way.  We also get a nice Galvatron moment, when he interrupts a cultist about to ambush Optimus and feeds him his own grenade.  Bad-ass!  He summons some help, and then makes himself scarce.

We get one more interlude, seeing Thunderwing fully repaired and the dark Matrix make its way to Cybertron for revenge, before cutting back to the Autobot and Decepticon reinforcements who have arrived to save the day.  Side by side, they battle the Unicron minions.  Scorponok is stopped from killing the last one by Optimus.  They are, after all, beings possessed.  Primus hails the wisdom of Optimus, and informs the assembled Transformers that this was his plan all along, to flush out those Cybertronians corrupted by Unicron's will.  Naming Optimus leader was a ploy.  Optimus' misgivings increase, but before he can do anything about them he collapses in pain again, begging his 'friend' to fight it.  Hi-Q?  Once again, Furman's use of the lore of Transformers past creates compelling layers of story.  How easy it would have been to forget about Optimus' Nebulon companion, but instead he becomes an important plot point. 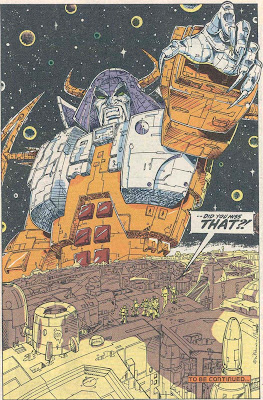 The book ends on a bang.  Kup, looking up in the face of a shadow, asks Primus to confirm that the god is aware of everything Unicron does.  When Primus does so, Kup asks him how he could possibly have missed THAT, pointing to the looming form of Unicron about to destroy them all!  It's a lovely piece, one of my all-time favorite Unicron images ever.  The glint on Unicron's long nail, the starscape, the look on his eyes, the landscape that is Cybertron.  It's just gorgeous.  So gorgeous, in fact, that Wildman signed it, which he hardly ever did for an interior page.

Another terrific installment in the Transformers saga, this was.  The plot continues to build, as all threads converge on Cybertron.  Even as this goes on, Furman is laying the foundation for the next story, the life after Unicron plotline.  It's such an absolute joy to read these issues, to appreciate the deftness with which Furman weaves together disparate elements from both his own run and Budiansky's.  Issue #75 feels absolutely perfectly set up.  I can't wait to read it again.

The only hint we get for next month is the 'to be continued...' at the end of the last page.  I don't think any more needed to be said about what we're going to see next issue.  The Void! caps off IDW Publishing's Classic Transformers, Vol. 5

, available for purchase at Amazon.com.
Posted by Jimtron at 11:28 AM

That image of Unicron never did anything for me. Something just looks "off"...maybe it's the coloring of the helmet, I dunno. I always preferred the two-page splash that Senior provides next issue (even when I wasn't a Senior fan when I was younger.)

The UK book took the idea of the void and went one step further by running an almost completely blank "Transformations" content page with just the first speech bubble and the legal info on an otherwise empty template. It was quite an effective tick.

You can see what Tim's talking about here:

Someone refresh my memory here... the Transformers signal in two parts on Earth... was that Fortress Maximus? His body was on board the Ark, above Earth, right? Or did it have something to do with a UK storyline? Can't remember...

For that matter, I also still don't quite get the significance of Primus staring at Galvatron's Decepticon insignia in issue # 73 in order to decide the Transformers are "one". After all, there can be more factions, right? And the body he possessed was that of another faction?

Like I said earlier, the closing splash page was very well drawn, but the fact that Wildman added toiletdoors under Unicrons's ribcage was IMO a bit... meh :P

But the character building for Scorponok is quite well done here, making his "moment" next issue all the more intense and touching.

I really can't wait for your review of issue #75. I couldn't believe how... thick it was when I picked it up. An extra long issue full of the biggest payoff imaginable. Man, I loved it.... and still do :)

They never explicitly addressed the signal in two parts so we're left with speculation - a Headmaster, a Duocon, a Pretender, a Powermaster or whatever. The common fan theory is that it's Spike Witwicky but when he does next appear this isn't referenced at all.

Really, there was never any doubt in my mind about what that life form in two parts was. Spike / Fortress Maximus. It wasn't explicitly made clear, no, but it certainly thematically was when Spike returned in issue 79. As the only Transformer left behind on Earth, process of elimination would say that it had to be him. Who else could it be?