Ron Friedman auctions, charity, and you 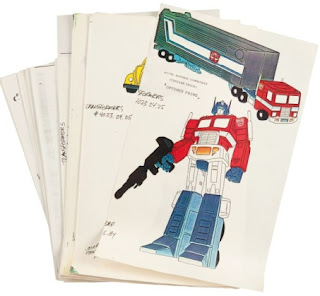 Do you know the name Ron Friedman?  He's the gentleman who penned the first draft of The Transformers: The Movie.  Well, as it turns out, a large number of his files are going being auctioned off next Friday, including some character model packs, some original Transformer scripts with handwritten annotations, some early color cells, and more.

Some of you may remember last year's charity auction for an early Toy Fare catalog.  We wound up raising over $2300 dollars in addition to purchasing the catalog and making it available to everyone.

Now, we're trying to see if lightning can strike twice.  In what started really as an effort to coordinate serious bidders to prevent working at cross purpose has blossomed into another charity drive. If you're interested in the details, you can click over to The AllSpark.  It's been 24 hours and we're at $50 from five people.  Hopefully we can snag one or more of these auctions, share them, and use what ever is left over to benefit a good charity.  (We'll be voting on which auction items to go for, and which charity we'll be choosing.)


Well, we raised over $1600 dollars, and we managed to snag at least 6 items with the help of some coalition bidders.  We also coordinated with some major TF bidders to prevent unnecessary bidding wars, and I believe that several more winners will be sharing their findings.  Thanks to all who participated; it's events like this that convince me that the TF fandom is one of the more friendly ones.
Posted by Jimtron at 9:27 PM

Treasure trove, eh? Man, I hope we can pull through.

I so wish I could help... this is a chance one gets only ONCE in a lifetime. :(

Even a $5 donation helps, you know!

I will make a donation tomorrow.

I advise you to get all of the auctions that contain the TV scripts. They are 7 auctions in all that contain those. They seem cheap to get. The scripts may contain deleted scenes and alternate dialogue of episodes.

I also advise you to get the TV Series Audition Dialogue and Character notes. That too, looks cheap to get and would give a walth of behind-the-scenes information.

I know, but I'm having some financial problems at the moment. :(

I just sent you a $100 donation, as promised. Unfortunately, it seems PayPal has cropped my message to you when I hit the send button. Here is my message if full.

Many of us weren't able to contribute the way we would have liked to because of lack of funds.

So on behalf of us 'poor' fans who will still none the less be able to enjoy the fruits of the hard won treasure, thank you VERY much to those of you who helped.