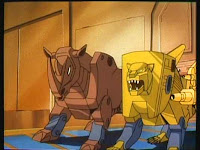 Zarak: Sixshot, there will be no more mistakes, understand?
Sixshot: I understand, sir.
Zarak: All preparations for our next attack on the Headmasters are complete. Turn the Autobots' attentions on the Earth as much as possible in order to hide our movements on Planet Zarak.

In this, the 12th episode in "The Headmasters" series, we have a title which spells out the primary action taking place, but does not hint at its part in the overall whole of Zarak's grand, mysterious plan. It opens on Earth with Ultra Magnus and Scattershot detecting unusual seismic activity in the Andes Mountains in Peru, after which we jump to the inhabitants of a simple village called Pan at the foot of a long-dormant volcano in the same mountain range. In this village we meet the annoyingly high-voiced Pipiro, his sister who renames nameless, his grandparents and Pipiro's oddly affectionate donkey named Koro. Pipiro and Koro wind up wrestling not long after their introduction. OK, so that's not quite a high point of this episode, but thankfully the playfulness is broken when they experience terrible tremors which begin to topple their homes.

Meanwhile, on Athenia, Fortress, the Headmasters and Twincast are examining the strange planet found at the center of the nebula from the last episode. They conclude that it belongs to the Decepticons and Twincast sends his cassettes Steeljaw and Ramhorn to investigate. We cut to Charr and find Zarak instructing Sixshot, still on Earth, to distract as much as possible the Autobots from the new Planet Zarak. A brief glimpse of this planet is granted, where we see enslaved Beastformers, from the earlier episode "Rebellion on Planet Beast", working to construct a giant transtector form. Initially, the Decepticon plot to use the Beastformers as slave labor was halted by Rodimus and he left the Monsterbots Repugnus and Grotusque to act as guardians. Either our lovable Monsterbots were killed in a Decepticon raid after this incident, leaving the inhabitants of Planet Beast open to capture again, or more of the Beastformers had been transported off their home planet before Rodimus knew of any problems. Either way, we get to see good ol' Octane here, apparently back with the Deceps, whipping the heck out of those poor Beastformer slaves.

Back on Earth, the once dormant Peruvian volcano is erupting and the bulk of the episode then follows the attempts to rescue the villagers. The Trainbots and Protectobots are dispatched from Scramble City, which Sixshot spies, and in response the Predacons aim to block them. Predaking fights Raiden, while the Protectobots are surprised by the Decepticon Headmasters.

Ultra Magnus requests help from Athenia and Chomedome, the Headmasters, Wheelie, Spike and Daniel immediately set forth, traveling in Broadside. This is spied by Laserbeak, however, who reports back to a very pleased Zarak. A brief exchange involving him, Soundblaster, Cyclonus and Scourge occurs:

Zarak (to Laserbeak): So, the Headmasters are headed towards Earth? My strategy is turning out as planned.
Cyclonus: What strategy?
Soundblaster: The less you second team know, the better.
Cyclonus: What does he mean by "second team"?

Following this are various skirmishes back in Peru as the Autobots continue to rescue the villagers and yet are constantly plagued by the attacking Decepticons. Eventually, Chromedome and the Trainbots are successful and the Decepticons retreat. In the aftermath, Pipiro and his family express sadness at the loss of their home and Chromedome deduces it was all a Decepticon ploy to divert attention away from the dark planet in the nebula.

On Charr, Cyclonus and Scourge express confusion over this seemingly odd plan, which could endanger using the Earth as a vital source of energy. Finally including the befuddled "second team" in the loop, Zarak outlines the specifics of his long-term goal to them, unconcerned if the Earth is destroyed.

We suddenly find that Steeljaw and Ramhorn have been monitoring all of this and Soundblaster immediately pursues them down the corridor. This bit I found a nice reversal of events from previous episodes, including this one, when the Decepticons seem much more apt at espionage and information gathering, thanks to Laserbeak, Ratbat and Ravage. Plus, this scene lays out Zarak's frighteningly extreme plan of destroying entire worlds to gather more energy.

Just when you think the episode is wrapping up, we rejoin Chromedome and the gang in Peru, watching Daniel and Pipiro chase the donkey Koro into some thick bushes. In a last minute surprise, Skullcruncher appears out of hiding, flanked by Weirdwolf and Mindwipe, gripping the donkey by the tail. Mindwipe grabs Pipiro and threatens to kill him. Then from out of nowhere, the mother donkey charges at Skullcruncher, bashes him hard enough to knock him over and in the confusion the Headmasters proceed to easily route the Decepticons. That momma donkey must have a skull made of iron!

Spike volunteers to stay and study the tremors as Pipiro's sister hands Chromedome a charm necklace as a parting gift, causing some sarcastic comments by Hardhead and Wheelie. The final scene occurs on Athenia as Fortress and his team listen to the recording made by Steeljaw and Ramhorn, who escaped Charr unscathed, and now are aware of Zarak's aims.

This episode has its highs and lows, the former found in the smaller moments of intrigue and the latter in the middle section involving the volcano. I found the villager rescue sequences a bit tedious, but when it's framed by the scenes on Charr it helps the episode overall. In addition, it's always great to see Ultra Magnus, Scattershot and the Protectobots, Cyclonus and Scourge are at last invited into Zarak's inner circle and there is the excellent reveal of Steeljaw and Ramhorn getting the drop on the Deceps with Soundblaster attempting to chase them down – total win!
Posted by Brian at 6:47 PM

Interesting to see them revisit Peru, which was the setting for Fire on the Mountain waaaay back in season one.

Agreed! I was going to mention that, but then figured I should keep my review focused and not ramble so much. But then maybe no one minds the rambling and odd digressions? :)

Pretty much dealer's choice on that one. Personally, I like to draw those kinds of connections.