Review: War of the Worlds, the series ep 16 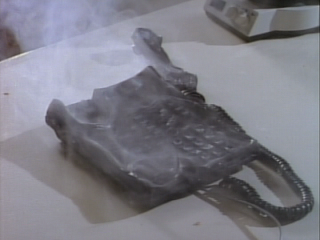 The Meek Shall Inherit is the sixteenth episode of War of the Worlds, the series.  Nominally, it's about an alien plot to disrupt the phone network, but it's more about Sylvia van Buren getting lost in the homeless scene in Portland. A homeless woman, Molly, witnesses one of her fellow street-people getting absorbed by an alien and goes a little crazy, eventually winding up in the same institution as Sylvia.  Together they break out and hitchhike back to Portland, drawn to the site of alien activity.  They live on the streets for a bit, in the cold, without food, until Molly gets caught by the aliens.  Armed with the knowledge that Sylvia can sense them and that she knows someone named Harrison Blackwood who opposes them, they try to catch Sylvia.  She gets away, and they halt their pursuit in favor of their primary objective, a power supply strong enough to allow them to destroy the phone network.

Meanwhile, at the Cottage, Ironhorse has been putting together a small team, Omega Force, able to combat aliens.  Much of the episode focuses on this team getting built.  At the end, Harrison locates Sylvia and calls for backup.  Ironhorse's team takes out the alien trio before they can communicate with the Advocates or seize the power supply.  The end. 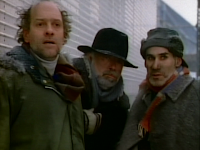 The Good:  As always, the producers tried to find interesting people for aliens to inhabit.  This time, it's a trio of bums.  While they are inconspicuous, they also have health issues that trip them up.

Sylvia is back, for just about the last time.  Her performance is more vivid this time out, probably because she isn't stuck in a room strapped to a bed.

It's nice that Ironhorse is training a team specifically to deal with aliens.  The show has played lip-service to the idea that the team can call on the resources of the US Government, now we're moving in that direction more firmly.  His team-building gave him a nice moment when Dr. McCullough informs him that the psych profile for the ideal candidate, which he thought was too demanding, was modeled on him. 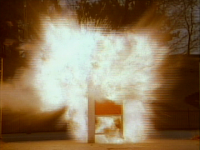 I rather like the effects when the phone system goes haywire, especially the exploding phone booth.  It reminded me a bit of Scanners, oddly.

The Bad:  The alien's plot is never really foiled.  Three soldiers failed to get a power supply that was unguarded in a truck yard.  What else is stopping them from trying again?  Also, an Advocate seemed skeptical of the plot, but surely the military value of disrupting communications should be obvious.  And, um, where was Ilse von Glatz, the female-voiced advocate?  Unless I miss my mark, this is one of only two S1 episode not to feature her. 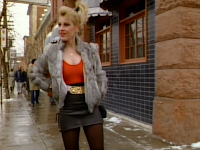 Sadly, this story has very little unity.  The alien's main plot is barely acknowledged by our heroes - Norton suspects that his difficulties in reaching the pentagon's computer may be because of alien activity, but then we never hear more about it.  Sylvia and Molly's struggle is interesting but seems fairly unimportant.  Harrison and Suzanne's search for Sylvia is uninteresting and cliched, especially the bit with the helpful whore with the heart of gold.  Ironhorse's training feels like it could have gone in any episode.  Overall, it's just a collection of elements that don't gel.

The ending is, once again, very abrupt.  The Molly alien is shot by Sgt. Coleman, one of Omega Force, and that's it.  In fact, the entire episode has an odd pacing to it, with a total lack of urgency on both the heroes and the villains.  Only Harrison's search, boring though it was, seemed to have the emotional investment of the characters involved. 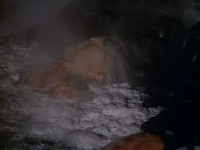 The Ugly:  Nothing worse than the cast-off remains of an alien host body after the unhealthiest of the bums absorbs Molly.

And there you have it.  After six weeks of solid programming, we get a miss of the worst kind.  Rather than trying too hard and just failing to connect, it feels like no one much cared about this little orphan of an episode.  While that might be appropriate, thematically, for an episode that focuses on the homeless, it does not good television make.   War of the Worlds - The Complete First Season

is available for purchase on DVD.
Posted by Jimtron at 12:01 PM

I know that DC Fontana's original script was re-written completely. What was in the original draft, I have no clue.

This episode and the infamous, "Unto Us a Child is Born" are the only two episodes of WOTW not to feature Ilse Von Glatz's Advocate. And her presence is sorely missed.

To the best of my knowledge she was filming an episode of Friday the 13th The Series which was what caused her to miss a few episodes.

Oh btw, I cannot wait your review of the next episode, "Unto us a Child is Born".

It is quite the infamous episode.

And I finally got my own blog up and running- so I feel free to check out my ramblings when you get bored.