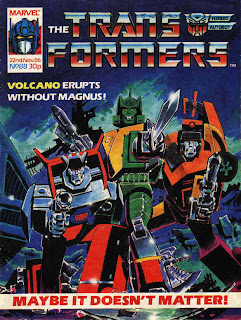 Issue #88 of the UK comic is a special that explores the aftermath of the events of Target: 2006. It was written by Simon Furman, pencilled by Will Simpson, inked by Tim Perkins, lettered by Richard Starkings, coloured by Gina Hart and edited by Ian Rimmer.

The cover was by Geoff Senior and it rocks! The three Autobot triple-changers brandish their weapons at the viewer and look ready to take on all-comers or die in the attempt. This is the sort of dynamism that has been missing from the some of the more "cut-and-paste" covers of the previous few issues and as such it really stands out. My only complaint was that since this issue is a summing up of where we are at the end of this massive story then a more general cover might have been more appropriate, as this only illustrates one of the plot threads. It's such a good image though that I do not really mind.

We start with the characters from the last issue standing around the wrecked space cannon. A narration in an ominously wobbly bubble talks of being content. We are then shown an iconic location for Transformers fans, the monitor-covered central brain of Unicron himself. He talks of how Galvatron is his puppet, how he escaped and time-travelled and, shockingly, how Unicron himself ensnared the minds of Blurr, 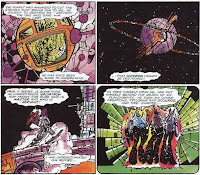 Hot Rod and Kup and sent them after him. This is really just a narrative cheat that allowed Furman to use some of the movie characters without having to deal with the jump to 2006(or 5) but it serves a more important purpose in setting up Unicron as an incredibly powerful and manipulative big bad. This story was huge, but Unicron was merely a bit player. With a setup like this, the story he comes to the fore in is going to be a monster. The fact that he is narrating also helps to overcome the natural ennui of reading yet more of a recap. Ok, so we're just being put into the picture as to what has happened but it's by the dark God who orchestrated the whole thing!

Moving into a more normal storytelling style Ultra Magnus and the Earthbound Autobots exchange mutual congratulations and Ultra Magnus prepares to leave, although Operation Volcano has probably kicked off without him.

Back of Cybertron, the set-up for Volcano is complete. Emirate Xaaron gives a fake conference designed for Kickback to overhear and the Decepticons to attack in force, falling into a trap. This works perfectly, but as they prepare for the attack, there is a big worry among the Wreckers that Magnus will not make it.

Back on Earth, Laserbeak finally succeeds in digging Megatron out of the wreckage of Galvatron's base. He hauls himself angrily from his hole and says "I thirst Laserbeak... for revenge!" which is a line that just sounds like Frank Welker in your head no matter how many times you read it.

Meanwhile Ultra Magnus has to pass up a chance to meet Optimus Prime in order to catch his space bridge back to Cybertron and aid the Wreckers.

On Cybertron, the Decepticon attack is gearing up. We are introduced to a spiky fellow called Macabre (great name) who leads the assault. As the Decepticons approach the staging area, Impactor gives the order to "Wreck and rule!" but a spanner is about to be thrown into the works.

Before the Decepticons can strike Astrotrain arrives bearing a communicube from Megatron telling them to break off their attack and send the Insecticons to Earth, setting up t 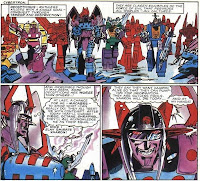 he next US story "Aerialbots Over America". The only Decepticon who will risk ignoring Megatron is Macabre who sneaks up on the Autobot position with the intention of taking a sniper shot at Emirate Xaaron.

Just as he is firin, Impactor notices and shoves Xaaron out of the way, taking the full force of the blast in the head. Macabre is immediately blasted by Autobot fire from all around but it is too late for the Wrecker leader. As he lays dying, broken wires and scorched circuitry spilling from a hideous wound, he names Springer his successor and calls Xaaron a wily old buzzard, for the last time. It's a great exit for a new character that we've really come to know and care over the past few issues, even if you couldn't buy him as a toy.

We do end on a relatively high note, however, as, returning to the Ark, we find Optimus Prime is alive and well. He counts the cost of events: Jazz lobotomised, although making a recovery, Grapple and Trailbreaker down, possibly forever in the case of Trailbreaker and the psychological damage of staring death in the face. In the face of this, Prime says, it is even more important to pull together and keep fighting so that "The Autobots will prevail!"

6 is capped off in such a way that prepares us for future events. Unicron playing a bigger role is obviously the major one. What reader isn't going to be excited by that prospect? Furman leaves this story in such a way that, date issues aside, it does not contradict the movie (still upcoming in the UK at this time) and although events will not ultimately play out in the comics in the same way they do in the movie it was still possible for a fan to read Target: 2006 then watch the movie and not feel a discontinuity. (While this is not technically the order of events, it would take a really dedicated fan to watch the movie up to the point that Galvatron should time jump, then pause it long enough to read eleven issues of comic book before finishing the thing off!)

Most pleasing, for me at least, is the clear implication that we are going to see more of the Cybertron characters after this storyline. With Impactor's death Furman is obviously setting up further adventures for Xaaron and the Wreckers. They have proven to be an engaging band of characters (even if composed of some of the ropier toys) and strike me as the most memorable part of this epic storyline, with the possible exception of the nigh-indestructible Galvatron.

Do I have any criticisms? Well, despite all the page-space given over to it, even in this issue, the problem of whether Ultra Magnus will get back to Cybertron becomes irrelevant when Volcano does not go off as planned. He is not even present at Impactor's side when the Wrecker leader dies. We had almost half an issue dedicated to finding out whether the triple-changers can fill Magnus' giant boots but they are not involved either. The personal drama of Impactor's sacrifice is, of course, more interesting than a big battle would have been but it's a little disappointing to not see Ultra Magnus or Springer making an impact on events, given all the set-up that has been expended on them.

This leads me to wonder how much of this Furman had planned. It would make sense that when it came down to him writing the Operation Volcano issue he suddenly came up with the perfect exit for Impactor and wrote that without giving as much regard for his buildup as maybe he could have.

The other problem with the story is that Optimus Prime's rundown of Galvatron deprivations is slightly anticlimactic, no doubt because of being forced to adhere to the stories already laid out in the US. We have a dramatic picture of a braindead Jazz but are told that he is getting better, and Grapple will be ok as well. Trailbreaker is touch and go, but who really cares about Trailbreaker?

Once again Will Simpson's art is subpar for the comic as a whole. I will not say it is a letdown because by now I expect it from him. I can't keep repeating just why I dislike his messy line work and weirdly contorted robot faces, but I will give a shout out to his version of Unicron, who seems to be able to move his outer ring around his main body rather than having it fixed in place, which I think actually looks pretty dynamic.

Either way, I cannot be too critical of the storyline that gave us Galvatron, Ultra Magnus, Emirate Xaaron and the Wreckers, slightly structural wobbles aside, and overall, Target: 2006 remains a shining beacon in Transformers storytelling and probably Furman's second best run on any comic to date.  IDW's trade of Transformers: Target: 2006

is available from Amazon.com
Posted by Bishbot at 12:44 PM

I was wondering the same thing..

When I got the Titan graphic novel of this it was a revelation at the time and really helped to tide me over during the Armada period.. I still love the Comic Series in its UK manifestation.. And Target 2006 has to be my favorite from it..

Hold up. If Unicron could take control of the minds of three Autobots so easily, why didn't he just get a bunch of them to ambush Magnus in 2006 and steal the Matrix from him? It would have been a lot simpler for him to do that in the first place, rather then creating Galvatron.

I agree with Bluecat about the implausibility of Unicron’s mind-control (not to mention the weirdness of having him control the ‘chosen one’ Hot Rod). I missed this issue first time around and for a long time assumed that the plan to trick Galvatron back to his out time was Autobot-inspired (which is why I couldn’t understand why their subsequent plans for dealing with him – basically charging up a volcano – were a little less imaginative).

As a way of getting movie-Autobots into the storyline, it more-or-less worked. A ‘heralds of Unicron’ solution (like Hook, Line and Sinker) might have made more sense, but would have made the story far too complicated. Also, Unicron implanted the suggestion of Autobot City into the present-day Autobots, apparently as a last piece of mischief, but why would he care?

Quibbles aside, a gold-standard saga, and a great series of reviews.

@BCCinema- I think his mind-control is very subtle. He can't turn them into complete mind slaves like Galvatron's device did to Jazz, but he can manipulate their actions very slightly in his direction.He can't make them do things that they normally wouldn't do (ie: kill all their fellow autobots). Time traveling to save the world, coming up with a wonky plan to stop Galvatron, is all something that the autobots would definitely do, and Galvatron just pushed them in the direction he wanted them to do ever so subtly.

At least that's my take on it.