Review: War of the Worlds, the series ep 15 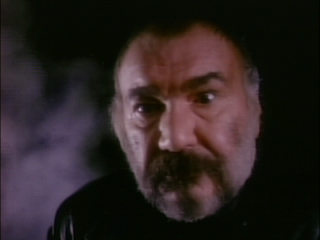 The Prodigal Son is the fifteenth episode of War of the Worlds the series. It details the machinations of a renegade alien named Quinn. Quinn, played by John Colicos of the classic Battlestar Galactica, was the original war-leader of the '53 invasion, but some genetic quirk of him or his host body made him immune to the bacteria that laid low the rest of his compatriots. It also trapped him in his human form.

Quinn made the best of it for thirty-five years, surviving as a brilliant and reclusive artist, but now that the Advocacy is awake again they're hunting him down for his organs.  He has other plans, and kidnaps Harrison to try to achieve those goals. He wants to deliver victory to the army of three million Mor-Taxian colonists on the way.  His strategy, offer the UN the opportunity to save 10% of the human race on reservations by surrendering to him, rather than the extermination they'd face under the Advocacy.  Aliens track the pair of them to the UN, though, and Harrison manages to save him with some makeshift pyrotechnics.  That and Blackwood's arguments that the aliens would never accept him convince Quinn to let Harrison go.  They'll meet again, he promises.  Alas, they wouldn't.

The Good: So much good in this episode.  Let's start with Quinn! It's nice to see the mythology of the show expanded like this.  Colicos turns in a great performance.  When realization dawns on Harrison and he accuses Quinn of being an alien, Colicos' reply of, "no, YOU'RE the alien" is just terrific.  Martin and Colicos have a great dynamic between them, full of intelligence and wit and energy. Their arguments about if humanity deserves to live or which side offers Quinn a better chance for survival were a joy to watch. 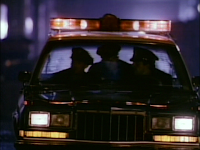 The opening sequence was a lot of fun.  Quinn is walking down the street, before we know anything about him.  Sirens make him nervous, and with good cause.  It seems a police car, oddly with three NYPD officers in it, is after him.  They've got obvious radiation scars, so we conclude that they're aliens.  But Quinn tricks them with an alien flash-bulb and then ironically quips "to life immortal, sucker!" as he dispatches one, cluing in the audience as to Quinn's nature.  The idea of strife within the alien camp is a very nice one, well worth exploring.

Meanwhile, Ironhorse and McCullough quickly realize that something is wrong with Harrison when he misses their briefing with General Wilson (DRINK!) and hunt him down. They get some nice moments together, especially when Suzanne almost cracks up at the thought that Harrison might have been absorbed by an alien.  Kudos to the writers for having Ironhorse evacuate the cottage when Harrison becomes suspect.

I also rather like Ironhorse co-opting the NYPD to hunt for Harrison, then the aliens immediately subverting the NYPD to their cause by absorbing several detectives. "This won't hurt," indeed.

Finally, the moment when Quinn reveals the extent of his plan to Blackwood was perfectly executed. Humanity can live on 'reservations', far from Quinn's kind. Given Blackwood's closeness to Ironhorse and even his recent experience in Dust to Dust, the word 'reservation' must be quite loaded in his mind. Harrison wants to know what his role is in all of this, and Quinn informs him that he'll have the final selection of the 10%!  How grisly; how macabre. And yet, on some level, perhaps somewhat seductive? 10% is 600,000,000 people.  Surely with someone like Harrison picking out the best and the brightest, that populace might manage to flourish. But he could never agree to such a plan, it's not in his nature. Besides, could humanity ever trust the aliens after all they've done? 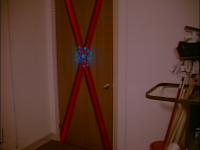 The Bad: I don't like knocking special effects, but there's a REALLY cheesy lock that Quinn puts on a door.

Also, Harrison leaves a clue behind for his colleagues,writing Q = Delta, which Ironhorse takes to mean Quinn is an alien, what with delta having 3 sides.  Why not Q = A? Or Q = 3? Kudos for writing it on a 'save the dolphins' matchbook, though.

Coincidence - this time, it's that the one alien with the weird genetics quirk HAPPENS to be their war leader? Ugh, too much! There does happen to be an episode of season 2 that could possibly help explain this, though I'm sure that nothing even close to that was in the minds of the producer here. 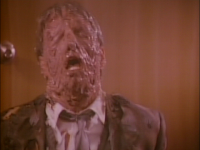 The Ugly: Harrison char-broils three aliens with some cleaning materials after Quinn is out of ideas.  Lovely!


Overall, this episode is a great introduction to the idea of Quinn.  This is the first episode since Sylvia van Buren was introduced to significantly expand out the mythology of the show. Unfortunately, Quinn will only show up one more time, and very briefly at that.  It makes wistful to think of what might have been, had season 2 continued under the auspices of Greg Strangis and Herb Wright.   War of the Worlds - The Complete First Season

is easily available for sale on DVD.
Posted by Jimtron at 12:52 AM

Ahhh, yes- Quinn, the alien Iago of WOTW. He definitely was intended to be a much larger player in the mythology of the show- ultimately, not knowing where he was going to land.

There is a scene where Quinn says his name in his native tongue which I had to double-check via closed captioning. At first, I thought he said, "I am war itself!"- nope, he said his name or his rank perhaps, in his native language.

Also, according to Herb Wright, Quinn's home away from home, was full of items and things that would play into who he is, and would be further explained.

Quinn is just a delight to watch- a true survivor. And he would definitely be making power plays against the Advocacy and humanity by playing all sides against the middle.

Oh and when Quinn returns in "My Soul to Keep"- Colicos was ill (although I don't know if his part was initially larger), and had to be given some Fisherman's lozenges.

I heard that as "I am war itself" also, which certainly makes sense in context.

that's funny... i've seen people reference this "i am war itself" thing elsewhere... yet, when i watched this episode, once, when i was a kid, i was absolutely sure i heard "I am Mwar Itsoff" as an alien name/title. i've always been inclined toward strange things in language/linguistics, so i guess i'm less likely to automatically convert an unfamiliar sound to something familiar (very common and functional mental processing thing)... then again, i've also been the victim of name mangling by people doing the same after hearing my name, so... heh heh...