Review: War of the Worlds, the series ep 7 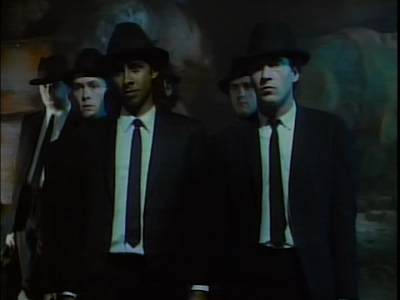 The seventh episode of War of the Worlds, the series is titled Goliath Is My Name. The aliens attempt to acquire several vials of the deadly Y-Fever, a man-made disease that melts the human brain within minutes of exposure. In the process of infiltrating the tunnels under Ohio Polytech, alien agents take over the bodies of fantasy role players using the tunnels for their games. One of the aliens gets exposed to the disease and loses the ability to distinguish fantasy from reality, causing trouble for both his Comrades and the Blackwood Team. Blackwood uses his knowledge of the game to bait the alien into following him back to the sterile lab environment, where they trap and kill it safely.

Harrison's characterization. His tuning fork technique is used again, which I always enjoy. There's a great bit where the campus security decide that they should patrol around the proximity of a wet t-shirt contest and Harrison laughs ... only to cover it up with obviously phony outrage when Suzanne shoots him a look. He may be a vegetarian environmental pacifist kook, but hey, he's still a man. He also has a great exchange with Ironhorse where the soldier laments that he'll probably be sent to the stockade for their latest transgression. Blackwood quips that he'll take full responsibility, prompting Ironhorse to ask what that even means. Harrison admits that he has no idea, but thought it sounded good. 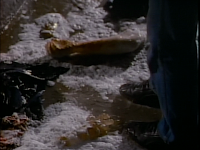 Speaking of great exchanges, Ironhorse had some good ones too. When he hears the term "fantasy gamer," he asks if that's some kind of swinger. When Harrison's aforementioned tuning fork comes out, he grouses that "it's oogah-boogah time." And, of course, he kicks some serious alien ass. I like the image of him searching alien corpses for the Y-Fever, alas in vain.

There is some nice unintentional foreshadowing with Debi and Norton. "Some day I'll be old enough to help," she says. It'll come true in a major way in the second season. Norton just rolls his eyes and sarcastically says that he can't wait.

The Advocates get in a nice little bit of misanthropy, when they comment that humanity's self-destructive nature is both their greatest enemy and their greatest ally. Earth is "truly a filthy place." 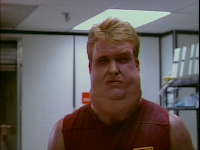 Jefferson, the Alien-human hybrid, is a hoot. He's a football star, though somewhat clumsy, brought in as a ringer by one of the RP teams when they think that one of their own was kidnapped (more on that later.) He's the Goliath from the title no doubt, who gets absorbed by an alien and then exposed to the toxins. Once his human brain starts to melt, he becomes confused. He treats the theft of the Y-Fever like a game victory, to be loudly celebrated. He also grabs his still-human RP buddies and drags them into the tunnels, to hunt their game enemies. Eric Broskotter really sells the role of a fraternity alien.

The Bad: Once again, the cardinal sin of this show is coincidence. This time, rather than be alerted to a missing bit of germ warfare, which would make sense, the team is sucked in because a friend of Dr. McCullough goes missing. He's the first victim of the aliens in the tunnels, a kid who gets his face ripped off after shooting an alien with a toy gun. It's worse because it's not even necessary.

After the poor kid gets his face ripped off, his fellow gamers make the bizarre assumption that the other team has kidnapped him. There is nothing in the episode to make one think that this makes sense. They're playing a glorified version of lasertag, so why would they do such a thing? Just shoot him and be done with it.

Norton playing video games in frustration at having nothing to do. It's probably meta-commentary about how little there is for the character to do, but it just makes him come across as bitchy. 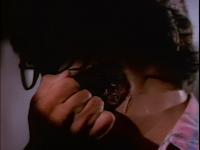 The Ugly: I'm gonna have to go with the face-ripping on this, though they kill Jefferson by inducing a vacuum. A great thing about the face ripping was how the alien screamed like a little girl when he's shot with the fake weapon, only to realize that he's fine and kill the kid in retribution.

All told, probably the best episode of the show to date. Good writing all around, strong characterization and a nice use of imagery. If they'd just avoided the silly coincidence that started things off, it'd be completely solid. Perhaps the writers are starting to hit their stride.  War of the Worlds - The Complete First Season  is readily available for purchase on DVD.
Posted by Jimtron at 9:52 AM