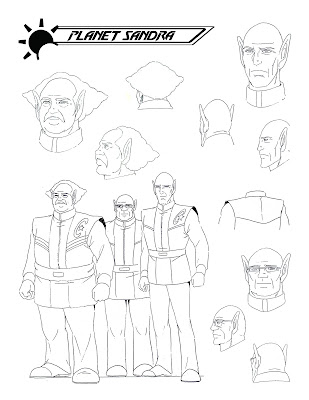 Another Tuesday, another edition of The Ark Addendum. This week I bring another Headmaster's themed edition, the populous of Planet Sandra.

In SOS from Planet Sandra, the Autobots and Decepticons alike receive a distress call from Planet Sandra, which exists in a parallel dimension in the spot occupied by Earth in our dimension. The planet is running out of energy, having foolishly squandered their own abundant natural resources.

Since this episode originally aired in 1987, it makes it one of the very first Transformers stories to involve traveling from one dimension to another. Of course, by now the concept of a Transformers multiverse is old hat, but at the time the only earlier dimension-hopping that I can think of was negative universe of The Killing Jar and the Quintesson banishment apparatus of Madman's Paradise. It's not really necessary to make the story work, but it's an interesting bit of the foundation of the modern approach to multiple Transformers continuities co-existing.
Posted by Jimtron at 12:01 AM

So why wasn't this included in the final book?

Hey, Anonymous. We just didn't have room. At 416 pages, The Complete Ark was pretty packed.