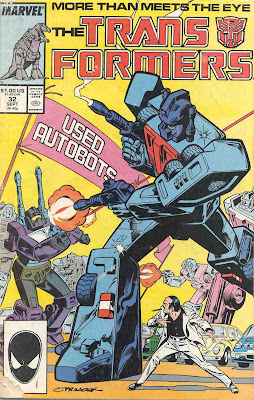 Used Autobots is the thirty-second issue of the G1 Marvel US comic series. The creative team is mostly familiar. Bob Budiansky continues as writer, with Don Perlin providing the pencils. Akin & Garvey are on inks, Yomtov on colors, and Pat Brosseau provides letters. The cover is by Frank Springer, who returns to the comic after a long absence.

It's a decent cover, with the Protectobots battling the Combaticons while the Throttlebots watch in vehicle mode. It's a fairly literal interpretation of the events within, though somewhat lackluster.

The issue opens with a convoy of Throttlebots getting attacked by Vortex. Blaster, for one, welcomes the attack, as it means he can stop searching for Decepticons to fight. Rather than stop to fight, the Throttlebots continue to drive on in car mode with Blaster balanced precariously on two of them. This strategy proves less than wise when oncoming traffic forces Rollbar to swerve, knocking Blaster off the roof. Nevertheless, he manages to electro-disrupt Vortex away while hanging off the side of a bridge. Hardcore.

With the immediate threat removed, the Autobots decide to fuel up before the Decepticons return. However, a routine stop at a Blackrock gas station turns into a R.A.A.T. ambush. The government has finally twigged to Blackrock's alliance with the Autobots and taken advantage of it. The Autobots again escape, though now Rollbar is injured and Blaster doesn't have enough juice to operate his weapon. Alone, low on fuel and damaged, the Autobots find a quiet place to lay low for the day ... a used car lot.

The opening sequence is quite good. There is a real sense of tension for these Autobots, operating without a safe base or a readily accessible source of supplies. It's also nice to see R.A.A.T. back.

Meanwhile, back at the Ark, Wheeljack has finished building a Geothermal generator, able to refuel the newly-repaired Ark. The intrepid engineer is starting to chaff under Grimlock's heavy-handed leadership, but not enough to act openly against his leader yet. When Slag reports a possible sighting of Blaster, Grimlock sends out Hot Spot to retrieve the errant Autobot.

Steve Ludwig, proprietor of Big Steve's Used Car Lot, is every smarmy car salesman in history rolled up into one. He just oozes insincerity. Bob's words, Perlin's pencils and Yomtov's colors all combine to paint a greasy portrait. Sure, he's more cliche than man, but it works. He brushes off some cops trying to tell him something about six vehicles, then proceeds to rip off a nice young family.

It doesn't take long for him to notice six new vehicles on the lot, thought he damaged Rollbar he decides would be best junked. This prompts the Autobots to reveal themselves. He freaks out, thinking that the Autobots are some agent of retribution for his past wrongs, though they assure him that all they want is a little fuel. At first he agrees, but then he remembers what the cops were trying to tell him. There's a $50K reward per vehicle, and Big Steve can't resist a lure like that. He not only calls R.A.A.T., but he fills their fuel tanks with sugar, incapacitating the six Autobots.

R.A.A.T., the Combaticons and the Protectobots all arrive within moments of each other. As they get ready to fight, Big Steve proposes an auction instead of a battle, with himself keeping the proceeds. As the sides talk it over, Swindle prepares to disrupt the proceedings by blasting Big Steve. Blaster prevents the death of a salesman, and the battle begins in earnest. While Autobot battles Decepticon, Walter Barnett has R.A.A.T. round up the incapacitated Throttlebots and high-tail it outta there, though not before pressing some paper into Big Steve's grubby hands. 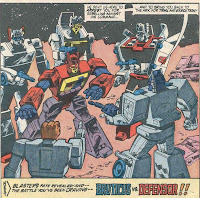 With Blaster's help, the Protectobots drive off the Combaticons. Big Steve is distraught over the destruction of his lot ... at least until he realizes that Barnett has given him $300K. Blaster can't stand the thought of the human profiting at the expense of his comrades and disintegrates the check. When he urges the Protectobots to pursue R.A.A.T. while the trail is still warm, Hot Spot drops a bombshell. The Protectobots aren't here as backup for Blaster, they're here to arrest him. We end with a great image of Blaster, surrounded by five Autobots with guns pointed at him.

The issue basically works. The tension at the beginning is played well, and the sense of isolation for Blaster and his allies is reinforced by the twist ending. Big Steve, the other main character of this issue, exists merely to be punished for his transgressions. He even realizes this on some level, as demonstrated by his initial reaction to the Throttlebots. He's cartoonish, but then not every character needs to be multi-layered and nuanced. 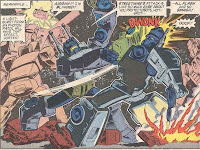 The art, especially the battle scenes, have a certain kinetic quality that I find appealing. Perlin may not draw in the modern hyper-detailed style, but he has wonderful composition. Check out Onslaught decking Hot Spot, isn't it fun?

Next month, we're promised Blaster's fate revealed and Bruticus vs Defensor. We don't get it though - instead, due to some deadline problems, we get Man of Iron. It was a frustrating way to break up the story, stretching the cliffhanger from 1 to 3 months.

Ah, I remember this issue fondly. R.A.A.T. came as a bit of a surprise, though. And it made me quite mad (to put it in a child's terms) that the Protectobots would do that to the Throttlebots.

And yeah, the break-up did suck. Was it ever revealed why that happened?

I recall reading (but can't remember where) that it was because of production delays caused by the Headmasters limited series.