First: Apologies. It’s been a long time since my last review. A really long time. I always intended to come back, and write more. After all, there’s a long long road left to travel and what kind of sick freak stops reviewing the issue BEFORE “Target: 2006”? I recently started a new job and was struggling to juggle the time that it entailed. I think I’ve sorted myself out now, so continue to watch for my regular column on here, as well as some extras I’ve been working on FOREVER (sorry Jim, soon...)

Before we begin it is probably a good time for another word on continuity. “Target: 2006” begins in the seventy-eighth issue of the UK book directly following the events of “In The National Interest”. For those who consider the US book the “prime” book (and it is a lot easier to work continuity out in this way) the last US issue that had been reprinted was issue #20, so you can see that Jim’s reviews have raced way ahead of mine. Obviously “Target: 2006” is intended as a sequel to “Transformers: The Movie” but that film had not yet appeared in the UK and “Target: 2006” works without it, as the movie characters are adequately set up, and the mystery of who they are and why they have come to 1986 is a great hook.

The prologue to “Target: 2006” was written by Simon Furman, pencilled by Jeff Anderson, coloured by Tony Jozwiak, lettered by Richard Starkings and edited by Ian Rimmer.

The cover was by Alistair Pearson and depicts Prowl, Ratchet and Optimus Prime as they fade from our dimension. It is not a convincing cover. The figures are very stiff and their faces are nowhere near as expressive as they need to be to convey a suitable sense of shock. The background consists of bland and generic metallic bulkheads. The brightly coloured energy that accompanies the exit is painted quite nicely but doesn’t really fit in all that well. I can certainly see what Pearson was going for, but there is nothing memorable about this piece beside the fact that such an important story begins with such a run-of-the-mill image.

From the first page we can tell that “Target: 2006” is going to be no ordinary story. None of the previous stories have been of a length and complexity that requires a prologue.

We begin with Optimus Prime crashing through an Earth forest, complaining about The Dinobots. Prowl stops him from doing too much damage but sympathises with the problem. Apparently, after the events of “In The National Interest” the Dinobots refused to explain anything and then left for parts unknown. Of course, this is to bring the story in line with the US comic but this behaviour is certainly not inconsistent for the Dinobots. Concerned that the Autobot forces are now depleted by five Prime orders a briefing to reassess the situation.

Meanwhile, in our first look at present-day Cybertron from a UK originated story we meet the leader of the Autobot resistance, Emirate Xaaron, as he travels to the secret underground Autobase. I am very fond of these views of a bombed-out Cybertron and Jeff Anderson’s artwork conveys this desolation magnificently. Xaaron is there to meet the Wreckers and their leader, Impactor, an Autobot commando unit who are about to go ahead with an operation designated “Volcano”. The major concern for Impactor is that Ultra Magnus is ready to lend his aid when the operation begins. Xaaron assures him that Magnus will definitely be ready and that after all, he is most concerned because Xaaron himself is to be the bait!

Elsewhere, above ground, an unidentified Autobot is begin pursued by the 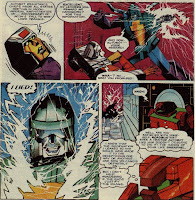 Insecticon, Shrapnel who is blasting him with painful looking lightning. The Autobot begs for his life and offers information as a trade. Shrapnel agrees and the Autobot tells him that the Autobot resistance leaders are all meeting soon and the location, appearing to blow the cover of Operation Volcano. Of course, Shrapnel goes back on his word and kills the Autobot anyway. Around the corner from this, we see Roadbuster observing events and wincing at the distasteful task he has had to perform. It emerges that the information Shrapnel has just been given is false and was leaked to that Autobot because it was well known that he would tell the Decepticons. This misinformation was actually critical in luring the Decepticons into falling for the real trap.

Back on Earth Optimus Prime is beginning his briefing, giving a speech about Autobot values and the need to protect the humans before he suddenly vanishes into thin air! Prowl and Ratchet follow suit, fading into darkness, before finally disappearing in a burst of colour! The other Autobots react with shock as we cut back to Cybertron to find Emirate Xaaron similarly distressed as the Matrix flame flickers and dies, indicating that the Creation Matrix has gone from the universe.

Somewhere on Earth three mysterious robotic figures arrive in much the same way that the errant Autobots vanished. We see flashes of them lit by lightning as they discuss whether they are in the right place. Some luckless humans have seen the atmospheric disturbance and come to investigate. The leader of the three new robots quizzes him about the date and is informed that it is 1986. For the first time we see this leader in his full glory as Galvatron reveals himself and his sinister purpose: “In an instant we have moved back twenty years. As it is in the future, so shall it be now. Earth and all it’s inhabitants, be they human or Autobot - shall kneel before the might of GALVATRON!”

The impact of this pivotal issue cannot be underestimated. Galvatron would not yet have been seen by UK audiences (except possibly in toy form) and while we do not yet witness his awesome power, his arrival is a masterpiece of build-up.

The mysterious disappearances and the arrival of Galvatron aside the issue is most important for continuing to show us the state of play on Cybertron. Furman depicts a fascinating world of underground resistance and plots within plots. There is no doubt that the Autobots are firmly on the back foot. The great war is no longer a war in the classic sense, it is a series of guerrilla actions by a desperate rebel faction and the fate of the unnamed Autobot defector is a brilliant reminder of how serious the situation is. We are introduced to both Emirate Xaaron and the Autobot commando group - The Wreckers, who will become extremely important in subsequent issues. Ultra Magnus is mentioned but not seen - his name and the absolute need for him to be ready for “Operation Volcano” foreshadow the emergence of a very powerful Au

tobot indeed. Furman is clearly enjoying himself here, moving away from strictly toy-based characters and creating any he needs to in order to tell his story. By this issue it had been a long time since the Transformers comic book was purely a toy catalogue but issues like this really emphasise how far the book had come even compared to the US book, which was often marred by the need to introduce the crazier new toy concepts. (Ok, “Second Generation” was all UK and absolutely terrible, but we’ll brush that aside...).

The art, by Jeff Anderson, is typically decent with those panels set on Cybertron the big standouts for me. I find Anderson’s Prime a little awkward but his other Transformers are terrific depictions of the characters. The colouring is typically decent although Shrapnel is consistently miscoloured for reasons I do not understand. Of course, the three new Decepticons are basically just their toys copied onto the page with all the clunkiness that suggests, but they appear in a flash of lightning and a massive rainstorm and it's still very dramatic.

All in all, merely a beginning, but a beginning with huge potential. The story that follows will rock the UK continuity to it’s core. IDW's trade of  Transformers: Target: 2006

is available from Amazon.com.
Posted by Bishbot at 12:21 PM

...issues like this really emphasise how far the book had come even compared to the US book, which was often marred by the need to introduce the crazier new toy concepts.

I haven't seen it often noted but Target: 2006 is packed with new toy introductions (I make it 17 although two of them weren't available on UK shelves), almost as though someone from Hasbro UK had dumped a set and requested they all be given appearances. And this is about the one time that Furman actually pulls off the task without it showing or the continuity taking a backseat.